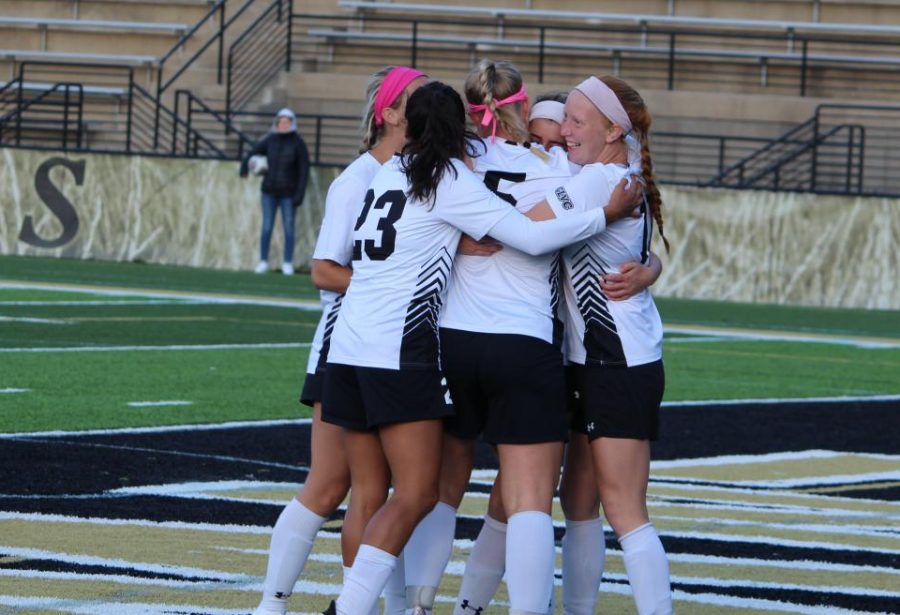 The women’s soccer team huddle up after scoring the first goal of the match at Harlen C. Hunter Stadium against Missouri S&T.

The Lindenwood women’s soccer team tied with the Missouri S&T Miners, 2-2, on Oct. 11 after leading 2-0 early in the first half.

The homecoming match marked the first home game for the Lions since their 1-0 win against Lewis University on Sept. 22. With the energy high at Hunter Stadium, the Lions wasted no time, scoring just 77 seconds into the match. The goal was scored by Mia Corrigan, who was fed down the right side of the field by Maggie Miller.

After back-and-forth physicality from both teams, the Lions extended their lead in the 15th minute when Sammi Gregory launched herself above her opponent to head home a free-kick from Kayleigh Kastberg.

“We’re used to playing that physical,” head coach David Musso said. “You either take it or give it and we have to be the ones playing on our toes. You can play on the edge, but just be smart about yourself.”

The Lions looked prepared to enter halftime with a 2-0 lead when Missouri S&T scored a goal in the 44th minute. With a 2-1 lead entering halftime, the momentum was still on the side of the Lions, whose defensive pressure forced the Miners into tough positions on the field.

“We got to have a killer instinct and stay in attack mode,” Musso said. “Late in the first half, we took our foot off the gas, they scored a goal and it changed everything.”

The physicality was amped up during the second half, as the pushing and shoving among the players was taking place during the dead ball phases of the game. At one point during a dead ball, a Miner and Lions goalkeeper Megan Swanson shared an exchange of words that extended to the two players pushing each other, with the referee intervening between them.

Even with the stout Lions defense suffocating the field, the Miners took advantage of a scoring opportunity to tie 2-2 in the 83rd minute.

The Lions and Miners battled until the final horn, signifying both teams would enter overtime. The intensity remained throughout the first overtime, which saw neither team able to score.

Both teams were given scoring opportunities in the second overtime, but the result matched that of the first overtime. The match ended in a 2-2 draw. The draw brings the Lions record to 3-6-1 on the season. With the playoffs approaching, the window for opportunity is getting smaller by the day.

“Tonight, we tied a game we should’ve won, and that hurts,” Musso said. “We have to rebound Sunday against Maryville, it’s just about ourselves and focusing on the next game at hand.”

The Lions will face Maryville University in St. Louis today. The next home game for the Lions will be on Oct. 18 when they host Rockhurst University at Harlen C. Hunter Stadium.