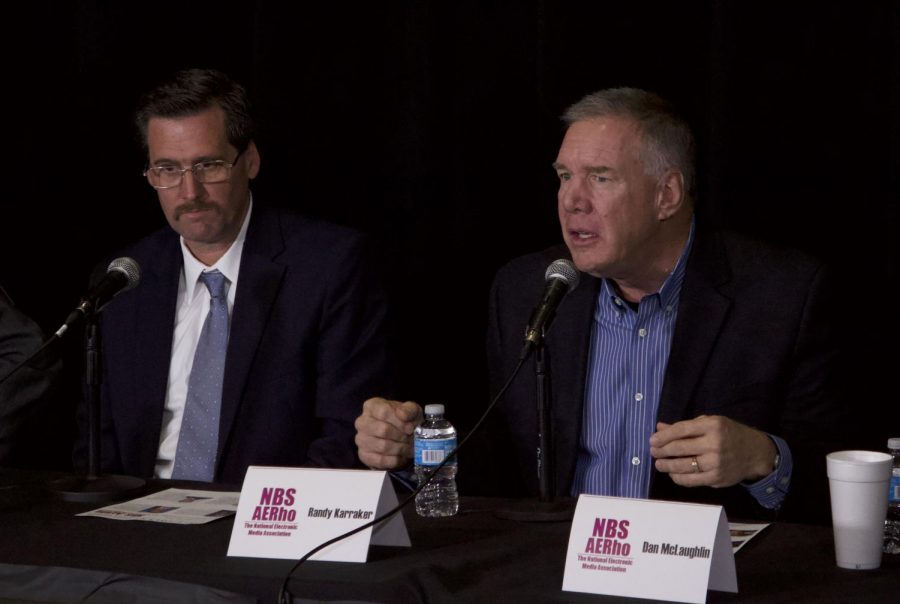 Randy Karraker (right) addresses the audience during the homecoming alumni panel on Oct. 11.

A panel of seven Lindenwood broadcast alumni gathered in the Young Hall auditorium on Oct. 11 to give advice to current media students.

Lindenwood’s chapter of the National Broadcasting Society presented the discussion, and it was facilitated by students Jack Leach and Neil Fischer. ​

The panel consisted of:

The purpose of the panel was to catch a glimpse of communications at Lindenwood throughout decades and see how the program has grown.
​
Fischer commenced the discussion by asking Cerny and Franklin what the program was like at Lindenwood throughout the seventies. Both agreed that they came to Lindenwood specifically to learn the trade of radio, which at the time was AM/carrier current.
​
Cerny credits Lindenwood’s radio program to Martha Boyer, in which he states that “everybody here owes a huge debt to Martha Boyer, with what she did to start the program.”
​
Cerny also notes that his success derives from the connections he made with his peers. They would teach each other the ways of radio.
​
Jack Leach furthered the conversation to communications in the eighties.
​
Karraker describes his early beginnings in jazz radio at Lindenwood, but his role in radio didn’t stop there. Karraker was able to “gain unbelievable experience” in all facets of radio, whether it be football games, basketball games, baseball games, you name it. This adaptability allowed him to prepare for a career of sports radio on 101 ESPN.
​
McLaughlin followed Karraker up by noting that Lindenwood played a key role in his radio career as a Cardinals broadcaster as well. He urged the students to get involved, learn how to edit and to be versatile, or you’ll be left out.
​
“You can’t learn our business from a book…get experience,” McLaughlin said.
​
Then the discussion rolled around to the 2000s. Amsinger mentioned that Lindenwood’s faculty, staff, and resources pushed him to success. He recognized Cerny’s grittiness, who was once his professor at Lindenwood, as a driving factor in his broadcasting career.
​
Collectively, the panel concluded that the broadcasting and radio world takes integrity, persistence and professionalism. McLaughlin said it’s crucial to separate yourself from the rest and to be well versed.
​
Before the discussion panel came to a close, Cerny left the audience with distinctive advice.
​
“Every time you get behind that mic, every time you put that headset on… you better thank god that you have that opportunity and don’t mess it up.”
Delete Image
Align Left
Align Center
Align Right
Align Left
Align Center
Delete Heading