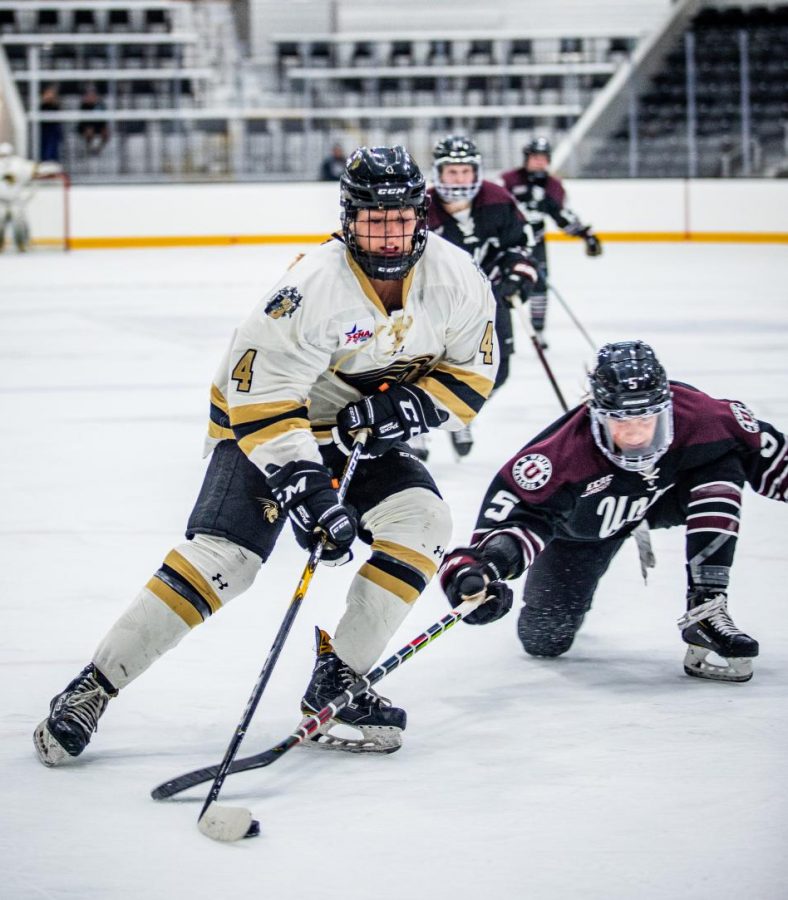 Lion's Casey Adimey (4) creates a gap in between Union's defense.

The Lindenwood women’s ice hockey team faced Union College on Friday and Saturday night for a win and a tie respectively at Centene Community Ice Arena.

On Saturday, all three goals came from freshmen athletes for a 3-1 win. The first goal came in the 12th minute of the first period by Madilynn Hickey. The Lions kept the heat up in the second period for another goal, this time by Gigi Pora.

Sophomore goalie Sophie Wolf is the usual starter, but was injured during warmups Friday night. Goalie Annika Asplundh stepped in and was supported by the Lions defense for a shutout in two periods, making 11 saves in the first period and 10 in the second period. The third Lion’s goal in the last period came from Casey Adimey. After that, the Dutchwomen’s managed to score once. Asplundh made 30 saves and earned her first career victory.

The Dutchwomen had no wins for the current season but came into Saturday night with a different mindset. The Lions had the advantage for most of the first period, outshooting Union College 14-4, but that didn’t stop the Dutchwomen from scoring with one minute to go on the first period for a 1-0.

During the second period, Lion Meara Ryan scored her first collegiate goal with the assists of Lokelani Antonio and Courtney Ganske to even things up. However, despite of the Lions dominating the shots on goal with 18 out of 30, the Dutchwomen were able to score yet again to retake the lead in the second period, 2-1.

Late into the third period, it seemed like the Dutchwomen were close to their first win of the season, but the Lions head coach Shelley Looney had different plans by pulling goalie Asplundh off the ice in order to have an extra attacker.

The move paid off when Megan Wagner scored to tie the game 2-2 only 60 seconds into the ice. Sierra Burt and Kirsten Martin assisted Wagner for the goal.

The Lions had a 53-27 edge in shots on goal, and are now 2-3-1 overall for the season. The Lions will be travelling to Postdam, New York, for two games against no. 4 ranked in the nation Clarkson University, on Oct. 25-26.