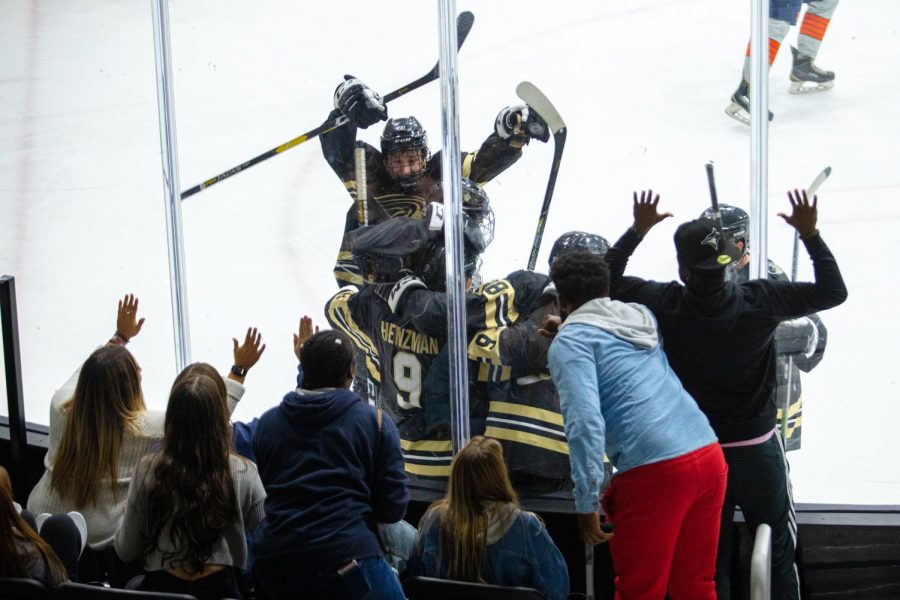 The Lindenwood men’s ice hockey team extended their winning streak to four after defeating the University of Illinois twice this weekend.

The Lions traveled on Friday night to the Illinois Ice Arena in Champaign, Illinois, for the first match. With eight minutes into the first period, the Illini had the lead 1-0, but 10 minutes later, the Lions were able to even things up after Hayden Dawes scored a goal with the assist of Zach Mitchell in the 17th minute.

With an efficient offense and Brendan Murphy’s lead, the Lions took the lead when Murphy and Kyler Newman set up Colton Craigo for the Lions second goal in the third minute of the second period. The next goal came from Murphy at minute 13 and with the assist of Newman.

To secure the win, Zach Martin scored one last time for four goals total for the Lions with six minutes left in the last period. Despite being outshot 26-24, goalie Cooper Seedott stopped 23 out of 24 shots from the Illini for the Lions.

With this win, Lindenwood’s away wins improved to four and moved to a 5-2-0 overall. The Lions came home to the Centene Community Ice Arena in Maryland Heights on Saturday night at 7:30 p.m. to face the Illini once again.

Saturday at home, the Lions didn’t allow the Fighting Illini to capitalize on any chance to score, winning the match 8-0.  Each of Lindenwood’s eight goals – in the team’s most dominant win yet this season – came from a different player.

First to score was junior Vegard Faret, soon followed by Dawes, bringing the score to 2-0 within the first seven minutes of the first period.  Tommy Heinzman’s shot from Dawes and junior Matt Runyon was the first of three goals in the second.  The Lions brought their lead to five in the last two minutes of the second by way of goals from Murphy and senior Aapo Nurminen.

Lindenwood now stands at 6-2-0 overall and is undefeated in the Central States Collegiate Hockey League. Next, the Lions will host Robert Morris University on Nov. 1 and 2.