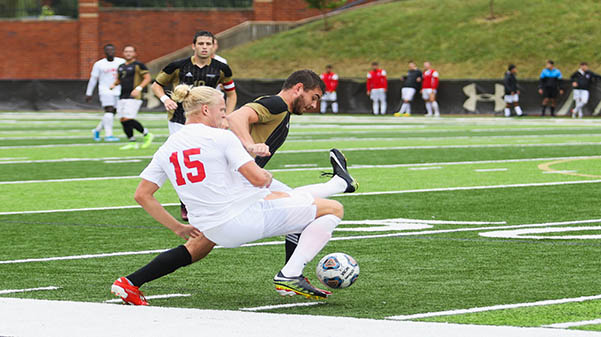 File photo: The Lindenwood Thomas Hutcheson (11) led the offensive plays with three shots against Lewis. The Lions fought through the rain condition, ended up with draw 0-0.

The Lindenwood men’s soccer team tied with William Jewell College, 1-1, on Oct. 20 at Hunter Stadium after both defenses battled throughout the match.

During the 16th minute, senior Mandlenkos Seremani scored his first goal of the season to give the Lions a 1-0 lead. Thomas Hutcheson was credited with the assist, his first of the season.

William Jewell scored in the 54th minute to even the score. Both teams traded scoring opportunities throughout the remainder of the second half, with neither team able to take the advantage. Luke McBeth led the Lions with four shots, two of those being shots on goal.

The match would eventually go into overtime, and through two scoreless overtime periods, the two teams tied 1-1.

The tie is the third for the Lions this season, as their record now stands at 6-4-3 overall and 5-3-3 in the Great Lakes Valley Conference. The tie against William Jewell ends the Lions three game winning streak, which dated back to Oct.11.

The Lions continue their home-stand on Oct. 25 when they play Drury University at Hunter Stadium.