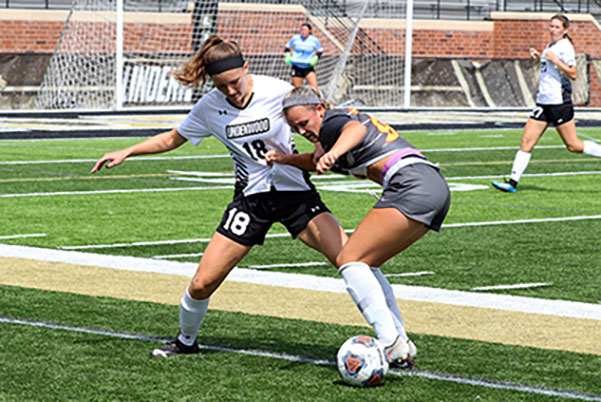 File photo: Alaina White battles a player from the University of Missouri - St. Louis to steal the ball.

The Lindenwood women’s soccer team lost to William Jewell College on Oct. 20 at Hunter Stadium behind early goals allowed by the defense.

The loss marks the third time this season that the Lions have allowed multiple goals in a match. The Lions were boasting a two-game winning streak, which included shutout wins against Maryville University and Rockhurst University.

For the entirety of the season, the Lions identity was their defense. Goalkeeper Megan Swanson has been the defensive anchor, registering 42 saves on the season thus far. In just the 16th minute of the match, William Jewell took a 1-0 lead after a long shot from the right side of the field found itself past Swanson.

The lead was then extended just four minutes later when William Jewell scored from a corner kick opportunity. Despite having an 11-4 advantage in corner kicks, the Lions were unable to capitalize from them.

The Lions offense remained in attack mode throughout the match, outshooting William Jewell, 19-12. Even with seven shots on goal, the Lions were unable to score.

William Jewell scored in the 70th minute to guarantee a victory. This is the fifth game this season the offense was held scoreless.

The Lions record now stands at 5-7-1 and 4-6-1 within the Great Lakes Valley Conference. The Lions continue their home-stand on Oct.25 when they host Drury University at Hunter Stadium.