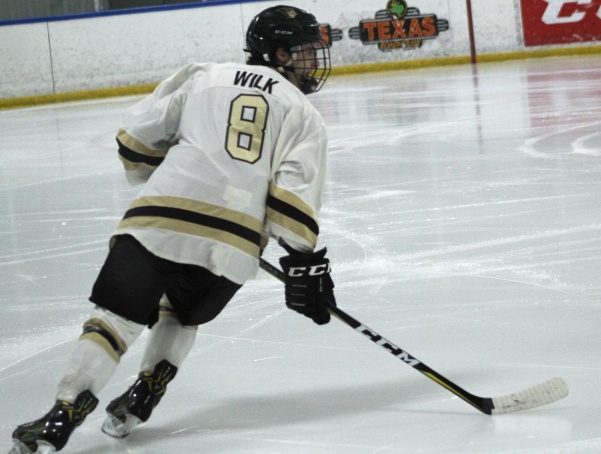 File Photo: Lindenwood defenseman Austin Wilk looks towards the puck during the Lions hockey game against Missouri State on Nov. 10 at Wentzville Ice Arena. The Lions won the game 6-3.

The Lindenwood men’s ice hockey team won 3-2 in overtime on Friday night and earned another win, 8-1, on Saturday night against Robert Morris University at the Centene Community Ice Center.

The first period ended with no power plays, 0-0. Lindenwood pushed aggressively, while the Eagles defense held.

With 1:30 left in the second period, Brendan Murphy scored the first goal to give the Lions the lead, 1-0, with Zack Mitchell and Kyler Newman earning the assists in the 18th minute.

The Eagles struck early in the third set to even the score, 1-1, but the Lions took back the lead only 21 seconds later. Less than two minutes later, Mitchell scored to give the Lions back the lead, assisted by No. 9 Tommy Heinzman and No. 6 Matt Runyon. Lindenwood leaded shots on goal 29 – 11. The Lions held their advantage but the Eagles found the equalizer, tying the game yet again 2-2.

The end of the third period resulted in a tie, pushing the game further into overtime. Lindenwood dominated the puck with 40 shots on goal to Robert Morris 14.

With 15 seconds remaining on the clock, No. 26 Vegard Faret finished off Robert Morris, scoring from the top of the circle. The Lions ended up with 45 shots on goal and goalie Stephen Friedland stopped 12 out of 14 pucks to earn the victory.

On Saturday, the Eagles scored only 21 seconds into the game. In response, the Lions scored eight goals to secure their second win of the weekend. Seven of those eight goals came during the first period.

Going into the second period, the Lions battled the Eagles defensively as they struggled to score. Both teams continued goalless until the third period when Alex Kalau and Newman set-up Murphy for the eighth and final goal of the day for the Lions.

Aapo Nurminen led the Lions with a total of four on three assists and one goal. Kalau had three points on two goals and an assist, and Austin Wilk had three assist in the game. Overall, Lindenwood outshot Robert Morris 58-15 and goalie Cooper Seedott stopped 14 out of 15 shots.

With the two victories, the Lions are currently undefeated in the Central States Collegiate Hockey League, 6-0, and 8-2-0 overall.

Lindenwood will host Davenport University with two-game home series on Nov. 9 and 10.