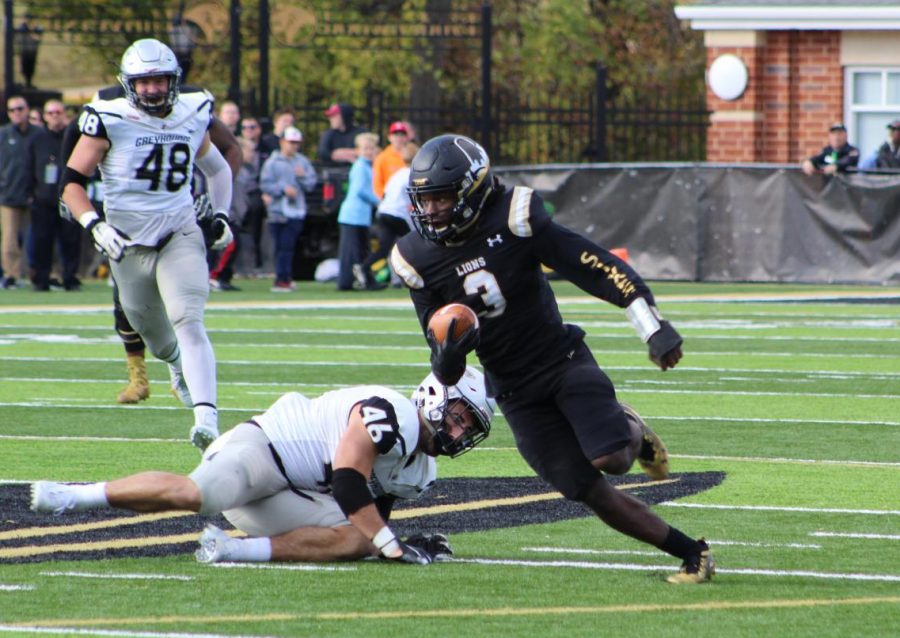 Nash Sutherlin (3) ran 53 yards for a touchdown on a pass from Brister, extending the Lions lead on Saturday against the University of Indianapolis Greyhounds.

The University of Indianapolis came into the game 7-0 and ranked No. 8 in the country. UIndy had previously won 23 straight conference games, setting a Great Lakes Valley Conference record. The Lions were on the hunt for their fifth consecutive conference win.

The Lions were able to force a 3-and-out on the Greyhounds first drive and a goal-line stop on its second drive that gave the Lions the ball on its own 1-yard line. A 62-yard rush from junior running back Nash Sutherlin carried the offense into opposing territory. A 46-yard field goal attempt by senior Brett Garner fell short as the game stayed scoreless through the first quarter.

The Lions first drive of the second quarter looked promising until sophomore Cade Brister threw an interception on the Greyhounds 27-yard line. The Lions forced another punt on the following drive, but a muffed catch on the return by senior Ricky McCoy gave the Greyhounds the ball back on the Lions 20-yard line.

Indianapolis knocked a 42-yard field goal through the uprights for the first points of the game for either side and took a 3-0 lead. On the following drive, Brister threw his second interception of the game. The Greyhounds returned the interception 40 yards for a touchdown to extend the lead to 10-0.

Brister bounced back with a 13-yard touchdown pass to sophomore Payton Rose to cut into the Greyhounds lead. Then, on third and goal from the 3-yard line, Brister scrambled to find the end zone as time expired in the half. The Lions would take a 14-10 lead into halftime.

The Lions defense only allowed 108 yards and did not allow a touchdown in the first half.

“We’ve watched these guys all year,” head coach Jed Stugart said. “The plays they make downfield is when the quarterback would scramble and get free… Its always stressed to keep him in the pocket. He got out on us a couple times. Our defense just came to play today.”

The Lions started the second half with the ball and put together a 6 play 50-yard drive that ended in another missed field goal from 32 yards. On its next drive, the Lions extended the lead. On what looked to be a short check-down pass, Sutherlin broke off a 53-yard run for a touchdown.

“Cade made a nice play,” Sutherlin said. “I looked back, he tossed it to me, and I just ran. I was ready to score.”

The Lions were ahead 21-10. A muffed catch from the Greyhounds on a Lindenwood punt gave the Lions a chance to extend its lead once again. Brister ended up throwing his third interception of the day in the back of the end zone.

“He’s so good at just going to the next play,” Stugart said about Brister. “He’s a playmaker. There’s no way we’d not go back to him because he’s just too mentally tough.”

The Lions defense continued to stand strong and gave the offense yet another chance to extend the lead. This time, the offense capitalized with a 21-yard touchdown pass from Brister to junior Glen Gibbons, which gave the Lions a 28-10 lead.

Brister finished the game with 531 passing yards, 3 touchdowns and 3 interceptions. He ran in a touchdown as well. Sutherlin finished with 145 all-purpose yards and a touchdown. Rose and senior Najee Jackson each finished with over 100 receiving yards. Once again, junior Drew Seers led the way for the Lions defense with 14 tackles.

“We’re gonna have so much confidence going in, we get another home game this next week,” Sutherlin said. “We’re gonna head in with a lot of momentum and we’re just going to dominate.”

The Lions stay home to take on Missouri S&T Saturday, Nov. 9 at 1 p.m. for its final home game of the season.