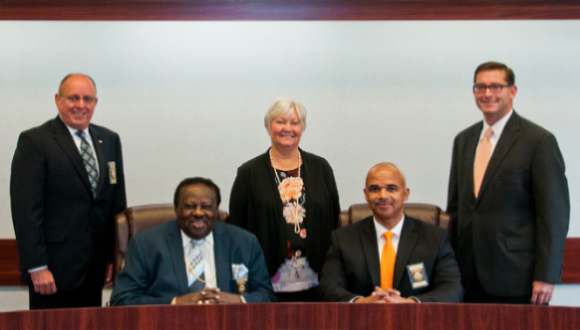 Lindenwood’s former interim president is on the St. Louis County Board of Police Commissioners, which is embroiled in controversy over a discrimination lawsuit.

Art Johnson, who returned to his position on Lindenwood’s board after John Porter became the university’s president, has not been accused of any wrongdoing.

The lawsuit involved St. Louis County Police Sgt. Keith Wildhaber, whom a jury awarded nearly $20 million last month.  He applied for a promotion in 2014 with 14 years of experience on the force, but according to court documents, he was told his sexual orientation was an obstacle.

“The command staff has a problem with your sexuality,” John Saracino, then a member of the Board of Police Commissioners, allegedly told Wildhaber.  “If you ever want to see a white shirt, you should tone down your gayness.”

Wildhaber filed a discrimination lawsuit against the county in February 2017, claiming that he was not given a promotion due to his sexual orientation. The jury ultimately sided with Wildhaber.

According to the St. Louis Post-Dispatch, reporters reached out the Board of Police Commissioners several times with no success.

Johnson, the vice-chairman of Lindenwood’s Board of Trustees, became a member of the Board of Police Commissioners in November 2016.

Earlier this year, he worked as Lindenwood’s interim president after the university put Michael Shonrock on leave.

Johnson declined to comment to Lindenlink, and the Board of Police Commissioners did not immediately respond to a request for comment Friday.

Last week, two members of the board, including its chairman, resigned, and County Executive Sam Page appointed replacements, Michelle Shwerin and Ray Price, a former chief justice of the Missouri Supreme Court.

The board is overseen by five civilian members that represent St. Louis County’s citizens by making decisions on policies and general orders that control and supervise the St. Louis County Police Department. The board can also fire or hire the police chief.

After the hearing, Page said in a statement that “the time for leadership changes has come and change must start at the top.” Page added that new board appointments are imminent.

The trial was a week long, and the jury heard allegations against the police of anti-LGBTQ bias and history of retaliation against Wildhaber, who was passed up for promotions 23 times.

“We wanted to send a message,” the jury foreman told the Post-Dispatch. “If you discriminate you are going to pay a big price. … You can’t defend the indefensible.”