Biology professor remembered for his humor and sense of justice 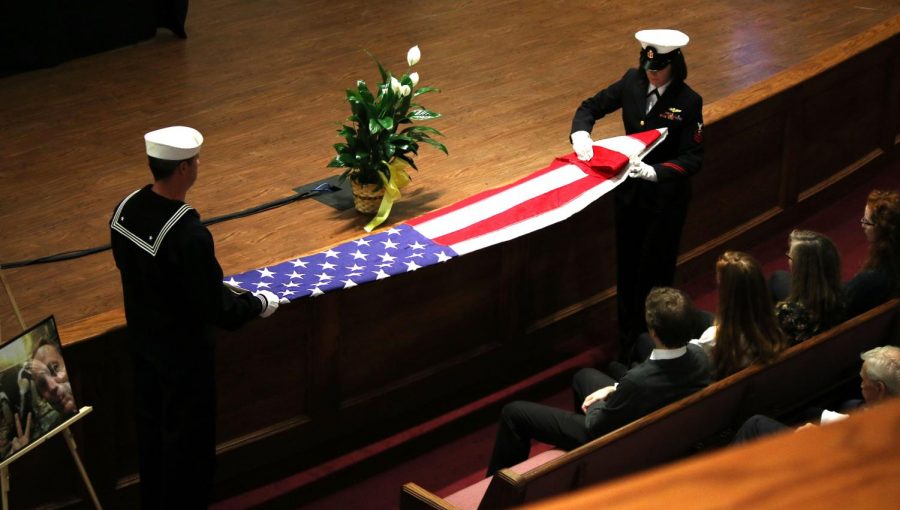 From the right: Petty Officer 1st Class Lee Newbold and Petty Officer of the Navy Tarah Snow fold the American flag to give to Anderson's wife, Karen.

Anderson died on Oct. 1 after having a heart attack during class.

The crowd was a mix of faculty, staff, alumni, current students, family and friends of Anderson’s.

University Chaplain Nicole Torbitsky began the memorial with a humorous tone and said Anderson would have disapproved of the memorial because he didn’t like to be the center of attention. Torbitsky wore a Hawaiian shirt in honor of Anderson, just like he had worn on his first day working at Lindenwood.

A Colour Guard from the Navy, the branch Anderson was a veteran of, started off by ceremoniously folding the flag and handing it to Anderson’s wife to the background of a recording of taps.

Out of all the people she spoke with about Anderson, Torbitsky said, none described him as kind or sensitive, but instead as principled and righteous. Torbitsky told stories of Anderson seeking justice by protesting the unethical use of cadavers at an Oregon school he taught at; and getting his family ejected from a water park because he wouldn’t let people cut his family in line. But he was also remembered for his wit and pranking co-workers and students alike.

Attendees laughed and cried, throats tight and eyes watering remembering Anderson’s one-liners. Anderson’s two daughters, Shannon and Carly, and his wife Karen sat in the front row. Torbitsky said despite his accomplishments, Anderson was proudest of his daughters.

“My dad taught me how to ride a bike, how to saute vegetables, how to parallel park,” Shannon said.

Ally Clancy, a Lindenwood alumna and former advisee of Anderson’s, spoke about his impact on her life – in biology and personally. He taught her how to pet bumblebees, garden and shared his fascination with otters.

“Otters were about the closest thing to his soft side,” Clancy said.

The School of Sciences has set up a fund to dedicate a memorial plaque in the Missouri Native Plant Garden Anderson started outside Young Hall.

“I wish I could crack a cold one with you, but here’s to you,” Clancy said. “Cheers.”