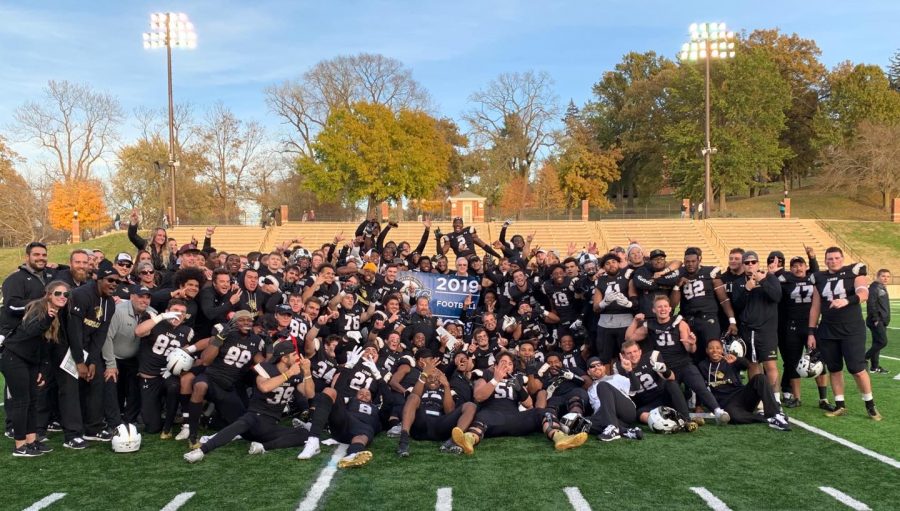 The Lindenwood football team poses in celebration after winning defeating the Miners to win the GLVC championship.

The Lions swept the Great Lakes Valley Conference play on their senior day with a  37-31 overtime win Saturday against Missouri S&T.

On the Miners’ first possession of the game, Lions junior defensive end Drew Harlow caused a sack-fumble that gave the Lions the ball inside the red zone.  A few plays later, sophomore Cade Brister found Payton Rose on a nine-yard touchdown pass to give the Lions an early 7-0 lead. The Miners got on the board the next drive by way of a 30-yard field goal. They struck again on a 3-yard touchdown by sophomore running back Aaron Moya to give the Miners a 10-7 lead late in the first quarter. Brister threw a pick on the Lions’ next drive that led to more points for the Miners. Another rushing touchdown made it 17 unanswered first-quarter points.

Lions junior defensive back Lloyd Lockett put a halt to the Miners’ offensive momentum when he picked off a pass on their first drive of the second quarter. The interception led to points for the Lions when Brister found junior Nash Sutherlin for a 17-yard touchdown to trim the Miners’ lead to 3.

The Miners had 298 yards of total offense in the first half. The Lions were having trouble covering the middle of the field, where the Miners were doing the majority of the damage. The Lions could not get the passing game going. Brister did throw two touchdowns, but only had 59 yards through the air.

The Lindenwood offense made adjustments and came out firing. The offense completed a 14-play, 95-yard drive with a 21-yard Brister touchdown on the ground on its first drive of the half. The touchdown cut the Miners’ lead to 3. On their next drive, a late hit on Brister put the Lions at first-and-goal from the 2-yard line. The offense was forced to settle for a field goal to tie the game.

The Lions defense picked up the intensity in the half and did not allow the Miners offense much success.

“Great adjustments,” head coach Jed Stugart said. “The RPO stuff we didn’t see them do a lot was hurting us. They were able to hit digs on us. We went to play a lot of man-to-man in the second half which we don’t do a lot of.”

On the Lions’ first drive in the fourth quarter, Brister continued to make plays with his feet and scrambled for a 37-yard touchdown to give the Lions their first lead since the first quarter. His second rushing touchdown of the day put the Lions ahead 31-24.

The Miners responded with a 17-yard touchdown pass for their first points of the second half to tie the game. The Lions defense stepped up in a big way with just under five minutes to go in the game. The Miners went for it on fourth-and-two near midfield. The Lions made the stop and took the ball back with a chance to take the lead. With two minutes and 24 seconds left in the game, the Lions attempted a 46-yard field goal. With the Lindenwood crowd ready to erupt, the Miners’ special teams came up big and blocked the kick. The Miners offense took over possession and began to march the ball past midfield. With two seconds left, the Miners were set to attempt a 41-yard field goal to win the game. The Miners holder could not handle the snap, and junior Jordan Perry raced into the backfield and got a hand on it. Time expired.

“Honestly, it’s like a calmness,” junior Drew Seers said about lining up against a potential game-winning field goal. “You’re just focused on doing your job and you can’t even hear everyone cheering and going crazy. We did our job and got the block, it’s what we needed.”

The Lions started overtime with the ball and got to work right away. It was only a few plays until Brister found junior Glen Gibbons for a 12-yard touchdown to take the lead. However, the Miners sought out revenge for the blocked kick at the end of the fourth quarter and blocked the Lions’ extra point attempt.

Up 37-31, the Lions needed a stop. On fourth-and-four to end the game, Perry came up huge again. This time he batted down an end zone pass attempt in one-on-one coverage. The Lions took senior day in overtime.

“They’d been throwing that fade all game against press coverage,” Stugart said about the final play. “They got [Jordan Perry] a couple of times today and I think he knew it was coming. We trusted him and he went up and made a play, and he blocked the field goal too. In our minds, he’s the player of the game.”

Brister was almost rendered speechless when talking about his team and the adversity they have faced throughout the season.

“We have a special group of guys,” he said. “We’re brothers. It’s just exciting to see our seniors getting that conference championship that they wanted. Just all of these guys out here are so special to me. Just doing it with them, I’m literally speechless with this stuff. I don’t know what else to say. It’s fun man, football is fun.”

Brister ended his day with 187 passing yards and 3 touchdowns. He also ran for 143 yards and scored twice on the ground. He has 39 total touchdowns on the season.

Sutherlin finished with 159 all-purpose yards and a touchdown. Seers led the Lions defense again with 18 tackles. Junior Grady Daniels was right on his heels with 17 tackles.

Rose finished with 52 receiving yards and one touchdown. He is nine yards away from crossing the 1,000-yard mark for the season.

The Lions will travel to Southwest Baptist University on Saturday, Nov. 16 at 1 p.m for the regular-season finale and a chance to win the GLVC title outright.