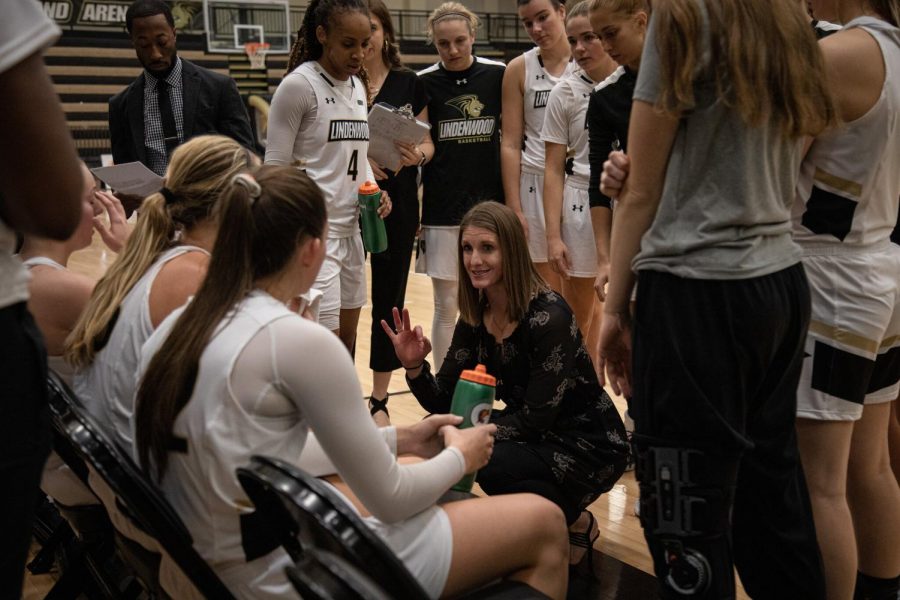 "We are three points away," is what head coach Katie Falco said to the team before moving on to win the match against Pittsburg State on Nov. 14, 2019 at Hyland Arena.

The Lindenwood women’s basketball team overcame a 10 point deficit in the fourth quarter to defeat the Pittsburg State University Gorillas 83-78 at Hyland Arena for their home opener.

The Lions were led by senior Kallie Bildner who scored 35 points, the most a Lindenwood athlete in the NCAA era has ever scored, and just six points behind of a new program record.

According to the Lindenwood athletics website, Cristina Edwards was the last Lion to score 35 points against Graceland in January 2010. The program record was set by Jamie Bonney with 41 points against Bethany in March of 2000.

“Our expectations are high,” head coach Katie Falco said. “This being my second year at Lindenwood and after having a great year last year, I want more and so do our players. I want to be a top program at the Division II level, we have players on our team right now that believe in it.”

The Lions started slow, finding themselves down by five points at halftime as the Gorillas repeatedly attacked with a pick-and-roll dependent offense.

“A part of the game we need to spend more time on and be better at is limiting penetration, which is tough,” Falco said. “Pittsburg is good at it and they exposed us a little bit. We ended up getting some matchups that were advantageous for us. I thought as a whole we got better getting over the screens, but when they had drivers and shooters it’s tough to defend.”

The lead for the Gorillas grew to 61-49 towards the end of the third quarter before the Lions began to chip away at the lead.

“The resiliency and toughness to overcome and fight,” Falco said. “We could’ve easily rolled over, but we didn’t, this was our first opportunity to see how we measure up against a really good team. I wanted to see what our identity would be, and we responded like champions.”

After two free throws from Julia Ruzevich, who had 18 points in 28 minutes, and a Bildner jump shot, the Lions were down by 10 points to start the fourth quarter.

The two teams traded buckets to begin the fourth quarter until the Lions went on a 22-6 run to take a six-point lead with one minute left in the game. The Gorillas scored a three-pointer regaining the lead, but a block from Ruzevich forced a foul. Bildner got the free throws to get back the lead, 83-78 and ensuring the Lions first win at home.

“I’m so proud of them,” Falco said. “We competed and we made enough stops.”

After the season-opening comeback win, the Lions will begin a six-game road trip to Ohio for the GMAC/GLIAC/GLVC Challenge. The Lions will face Walsh University on Nov. 16 and Ursuline on Nov. 17.