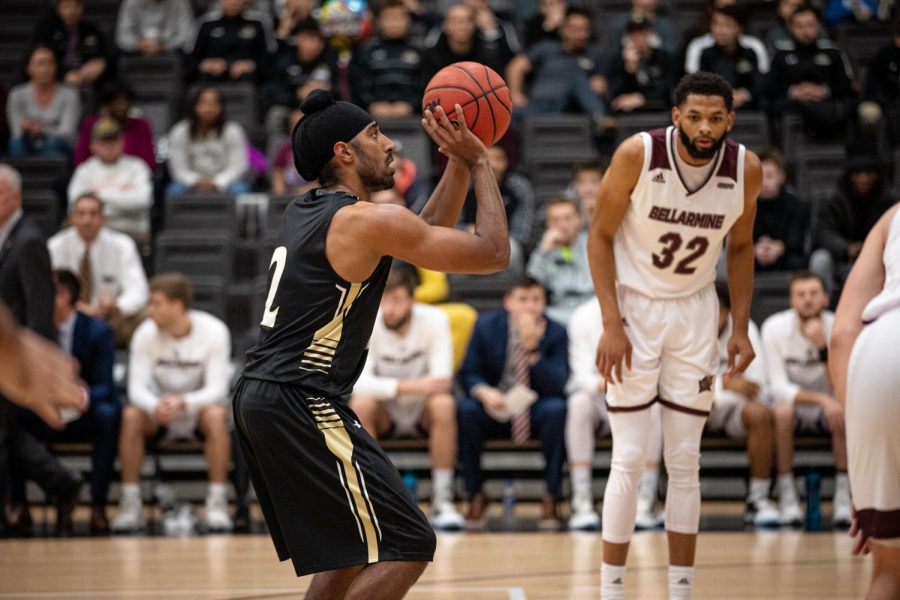 Senior from Australia Sukhman Bhinder shoots a free throw during a match against No. 3 Bellarmine University at Hyland Arena.

The Lions came into the game on a three-game winning streak and were clean in the loss column. The Knights entered the game ranked No. 3 in the country and were also 3-0 with all three wins coming by way of blowouts.

The Lions jumped out of the gate with active hands and grabbed a few steals early. Junior Tj Crockett scored the first five points of the game followed by a couple of free throws, a three-pointer by senior Cameron Scales and another Crockett bucket later. The Lions found themselves with an early 12-4 lead going into the first media timeout.

The Lions were 5-7 from beyond the arc and continued to push ahead. The lead was 21-12 by the second media timeout.

The Knights knocked in their first two three-pointers of the game back-to-back to trim the lead with 6:50 left to go in the half. Another Scales three-point shot and a mid-range jump ball from junior Vijay Blackmon pushed the Lions lead to 12.

The Knights continued to push but couldn’t stop the Lions’ hot shooting. A layup with two seconds left capped off the half. The Lions were 9-13 from three with Scales knocking in four of his own. Lindenwood led 42-34 at the break.

Crockett, whose first half ended early because of foul trouble, committed another foul less than two minutes into the start of the second half. He found his way to the bench again.

“It sucked because I wanted to be on the court,” Crockett said. “But I also have faith in my guys so I wasn’t really struggling, but I was just mad at myself because I was committing fouls knowing my team needed me at the moment.”

It was clear the Knights made some changes at the half as the Lions quickly surrendered the lead with a little over 16 minutes to go in the half.

“They started switching things a lot, which kind of obviously made sense,” head coach Kyle Gerdeman said regarding Bellarmine’s adjustments. “We kind of basically play four guards, sometimes five guards. They kind of kept us in front of them and made it hard to get to the basket.”

Each team began to trade buckets and the lead bounced back and forth. A three-pointer by senior Sukhman Binder put the Lions ahead 47-46.

The intensity grew higher as time slowly rolled off the clock. The Knights hit a three-pointer and grabbed the lead back with 12:41 to go. Crockett was fouled on a three-point attempt for the second time in the game and knocked in all three free throws. A shot by senior Luka Radosevic tied the game at 55. The Knights grabbed the lead the next time down, 57-55, and began to build on it.

With 4:40 left, the Knights were up 69-60, their largest lead of the game. Crockett drove and was fouled as he hit a layup. He hit his free throw and remained perfect from the line to trim the lead to six. Each team traded free throws and field goals until Scales hit his fifth three of the game, his first of the second half, to cut the Knights lead to 73-68. He hit another three after two Knights free throws to put the Lions down four, 75-71. This was the last sign of life for the Lions as the Knights closed out the game with free throws, defeating the Lions 81-73.

“A lot of positives,” Gerdeman said about the game. “It shows our guys that they can be on a competitive level with a really good team. I think human nature allows players to wonder for a long time ‘Are we any good?’, tonight shows them that they are pretty good.”

Crockett was more than confident in his team after the loss.

“We got a great group of guys,” he said. “A lot of teams should be scared to play us I’d say.”

The Lions will travel to the University of Illinois to take on the Illini in an exhibition game. That game is on Tuesday, Nov. 26 at 7 p.m.