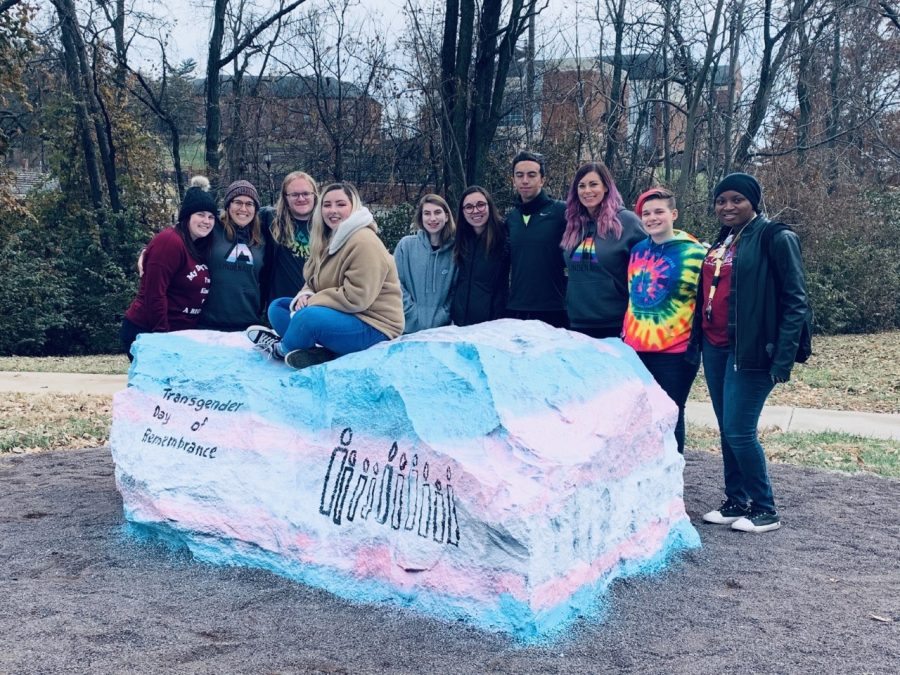 The Gender and Sexualities Alliance gathers for a photo around the Pride Rock on Nov. 17, after the slur was yelled.
Photo used with permission from Heather Brown-Hudson

A transphobic slur was reportedly yelled from a motor vehicle last Sunday while Lindenwood’s Genders and Sexualities Alliance was painting the Pride Rock.

GSA was painting the rock in tribute of Transgender Day of Remembrance and Transgender Awareness. TDOR is on Nov. 20 every year to honor the memory of transgender lives “lost in acts of anti-transgender violence.”

In 2019, there have been at least 22 transgender or gender non-conforming people fatally shot or killed. This number may be higher as some deaths may have been misreported.

On Sunday, GSA finished adding touches of light pink, blue and white to represent the transgender flag and was gathering to pose for a photo when the slur happened.

About a dozen GSA members were present at the incident and many are shaken up from the pejorative as this hate speech furthers the anti-transgender rhetoric in America, co-president Leigh Manzer said.

Staff and faculty have also been notified to assist those affected by the slur.

Manzer said GSA is using the incident as an opportunity to raise awareness for discrimination the queer community faces.

Co-president Hanna Dowell said that GSA is focusing on support and safety, citing allies on campus that have risen to advocate for GSA.

Lindenwood has Safe Training and a LindenAlly program available for people to become more educated and allies of the queer community on campus.

Update: The Lindenwood Faculty Council and Diversity, Equity and Inclusion Task Force released a joint statement on Nov. 26 condemning the event and calling out everyone on campus to support the LGBTQI members of Lindenwood.