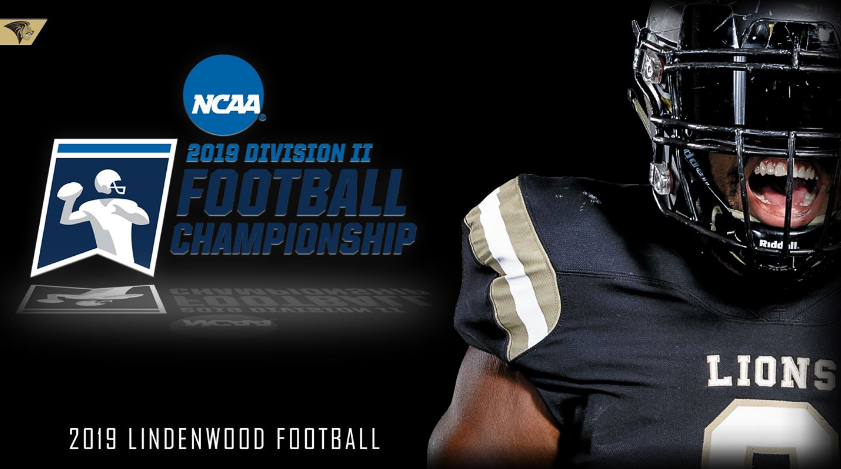 The Lions won their first Dll football playoff game in history on Saturday against No. 5 ranked Ouachita Baptist.
Photo from Lindenwood Athletics

The Lions won the first round of playoffs 41-38 against No. 5 ranked Ouachita Baptist University on Saturday.

The Lions received the opening kickoff to open Lindenwood’s first ever Division II playoff game. The Lions marched the ball down the field methodically and took a ton of time off the clock. The offense stalled deep into the red zone at the four yard line and were forced to settle for a field goal.

Lindenwood and Ouachita have completely opposite offensive styles and that showed early. On the first play of the Tigers first drive senior running back Brockton Brown ripped off an enormous 72-yard touchdown run to take a 7-3 lead. This was his 23rd touchdown of the season and took his rushing total to over 1,000 yards.

The Lions did not take long to respond. The Lions offense continued to move the ball with ease. It was only six plays later when sophomore quarterback Cade Brister spun his way out of a sack and ran 14 yards for a touchdown.

The Tigers took the ball back and countered again. It was Brown again for the Tigers as he ran 12 yards for his second touchdown of the game. The first quarter ended with the Tigers ahead 14-10. It seemed to be headed for a shootout.

On the first drive in the second quarter the Tigers continued to slam its foot on the gas pedal. This time it was sophomore quarterback Brayden Brazeal who found his receiver for a 9-yard touchdown to jump ahead 21-10.

Brister and the Lions fired back. It was on third down and goal from the 14 yard line when Brister rolled out of the pocket and hurled a pass toward senior Erik Henneman who was in one-on-one coverage in the end zone. Henneman won the battle and hauled in the catch for the touchdown. The Lions still trailed 21-17.

On the Tigers next drive the offense looked to slow the game down and take time off the clock. The Lions defense looked to forced its first punt of the game but a costly penalty after the third-down play committed by junior Grady Daniels gave the Tigers new life on the drive. The Tigers came to fourth-and-one on the Lions’ 17 yard line with just under a minute to go in the first half. It was a direct snap to Brown and the Lions held him up at the line of scrimmage to force a turnover on downs.

By the end of the half it was clear both sides needed to make defensive adjustments going into the second half.

The Lions defense came up with a stop on the Tigers first offensive drive of the second half. The Lions got the ball back and continued to surgically pick apart the Tigers’ defense. The Lions would take the lead on the back of junior Nash Sutherlin after he took a screen pass for a big gain and then ran in a 4-yard touchdown a few plays later. The Lions gained their first lead 24-21.

Lindenwood was unable to get another stop as the Tigers struck back on the next drive. The running back Brown continued his huge day as he ran in a 4-yard touchdown to retake the lead. It was Brown’s fourth touchdown of the day.

Again, the Lions bit back. The Lions led another long drive that ended in points. Brister found junior Glen Gibbons on a 22-yard touchdown pass in the right side of the end zone. The Lions wrestled the lead back 31-28 and were headed into the final quarter of the shootout.

The first possession of the fourth quarter saw yet another lead change. The Lions defense left Tigers freshman receiver Hayden Waller wide open in the secondary and Brazeal found him for a 47-yard touchdown to steal the lead back.

The Lions defense was able to hold the Tigers to only a field goal on its next drive, tying 38-38 with six minutes to go.

The Lions offense found itself in a third-and-four situation when Brister once again threw a ball up to Henneman in one-on-one coverage. Henneman, again, won the battle and hauled in the 26-yard catch to keep the drive alive. A few plays later, Brister was sacked on third down with 1:27 left in the game. Senior kicker Brett Gardner trotted onto the field to attempt a 30-yard field goal to potentially give the Lions the lead. Gardner performed under pressure and delivered a kick through the uprights. Lindenwood led 41-38 with 1:24 left.

The Tigers offense came onto the field with its season on the line. On the second play of the drive Brazeal launched a pass downfield that would have put the Tigers in the red zone if completed. Lions’ junior defensive back Jordan Perry dove in front of the receiver and picked off the pass. The Lions ran out the clock. The Tigers’ first loss ended its season.

Lindenwood moves on to face No. 10 Northwest Missouri State in Maryville, Missouri next Saturday at 1 p.m. for the second round of playoffs.