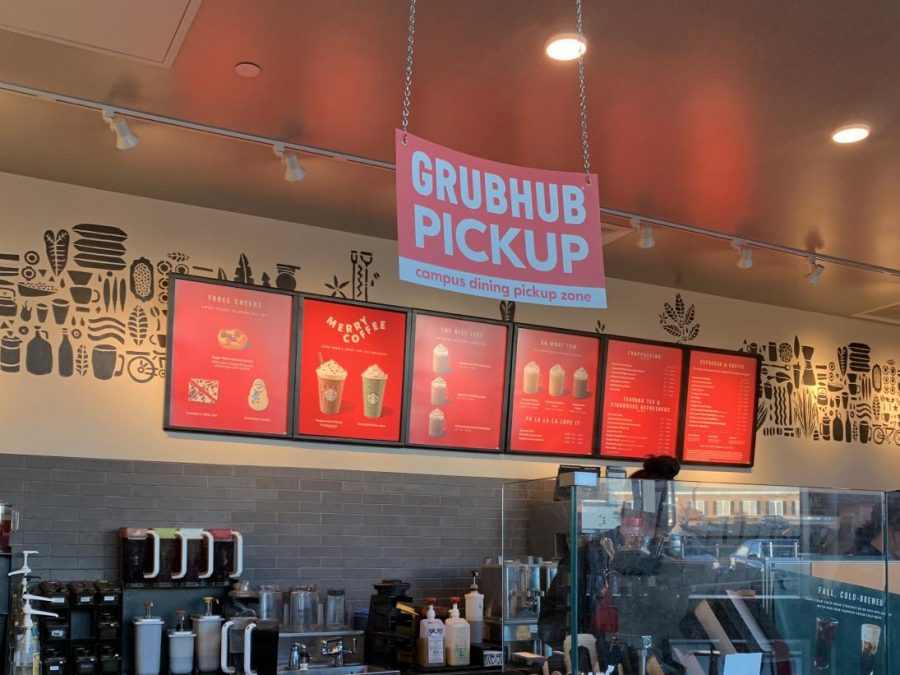 Grubhub pickup is now available at Starbucks in the LARC and Qdoba in Spellmann.

In addition to the other changes Lindenwood has made to dining this year, Grubhub is now an option to bypass lines and pick up food on campus.

The app is often used to order food from restaurants off campus and have it delivered.  Now, users can use a credit or debit card, meal plan swipes, or dining dollars to order food from two locations on campus to help alleviate long lunch lines.

Currently, Grubhub pickup is available at Starbucks in the Library and Academic Resources Center and Qdoba in Spellmann Dining Hall.  It may also come to the Spellmann Chick-fil-A in the future, Nancy Tinker, director of Dining Services, said.

“Chick-fil-A is in a pilot program right now with Grubhub at a very large university, and so they’re not ready for us to explore Grubhub yet at our Chick-fil-A, but maybe we will be able to in the future,” she said.

For now, the Grubhub at Lindenwood will just be order and pickup, but there may be delivery in the future.

“We very well could get Grubhub to deliver. Never say never,” Tinker said.

The process of getting Grubhub available at Lindenwood has been in motion for about two years, Tinker said.  The option was appealing as a way of alleviating long lines.

“There’s always been some type of interest because, on Tuesdays and Thursdays especially, classes seem to get out at the same time, so we’re constantly working on how to help speed things up,” she said. “When Tapingo [a company Grubhub bought in 2018] reached out to us, we know it’s very popular on college campuses, and so we really wanted to have that discussion.”

The Grubhub partnership was originally planned to launch at the beginning of the semester, but due to IT problems, it was delayed.

“The reason we wanted to launch it at the beginning is because everyone has more dining dollars at that time of the year, so now we’re really doing a soft launch thinking that more students will use it in January when they come back,” Tinker said.

The soft launch involves starting the services in increments and allowing time for everyone, including the employees, to get used to using Grubhub, Tinker said.

Students can use their meal plan on the Grubhub app for Qdoba or Starbucks, but it charges 53 cents for each transaction.  After the restaurant prepares the order, the app will notify you when it is ready for pickup.  The promo code CAMPUS can be used for $2 off your first on-campus pickup order.

Tinker said the newly-added street names on campus may help delivery drivers navigate, but she does not believe they had anything to do with the potential for Grubhub delivery.

“I think that had a lot do with just when you get on campus and navigate around,” she said. “We get a lot of deliveries that don’t know where Starbucks is.”

Freshman Jacob Fuss said some students may not choose to use Grubhub on campus yet because it only provides order and pickup.

“I don’t think I’d use it, if they delivered it to our dorm I might but I don’t really care about waiting in line,” Fuss said.