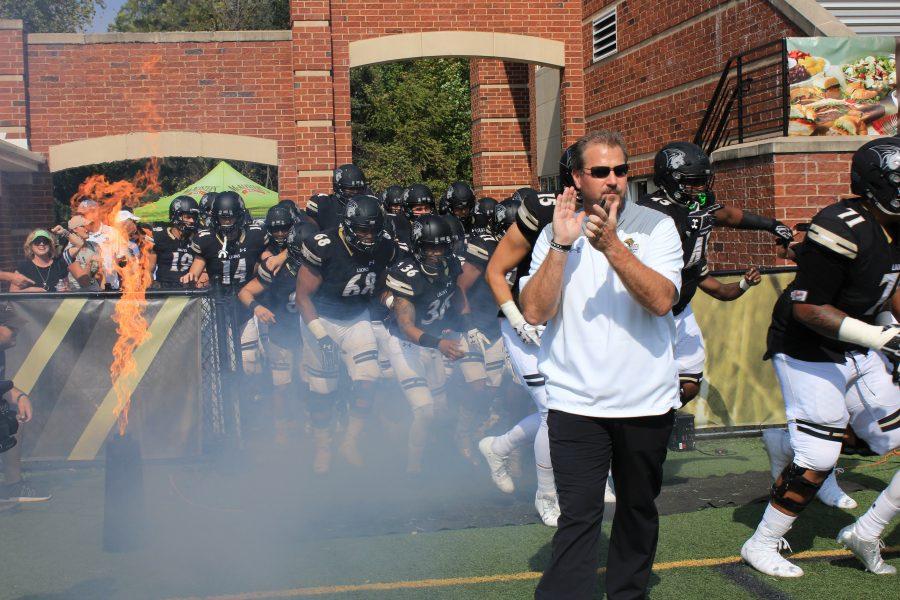 Head coach Jed Stugart claps as the football team runs onto the field before the Homecoming game.
File photo by Lindsey Fiala

The Lions’ season ended after being trampled by Northwest Missouri State 63-7 on Saturday.

The Lions came into the game off of a late fourth quarter field goal that led the Lions to its first Division II playoff win over No. 5 Ouachita Baptist.

The Bearcats came off of a narrow 7-6 victory over Harding to extend its home playoff winning streak to 23 games.

The Bearcats started the game with the ball and got to work right away. Northwest ran down the field and finished a 7-play 75 yard drive with a 39-yard touchdown run and jumped out to an early 7-0 lead.

Senior running back Justin Rankin, for the Bearcats, ran in his second touchdown of the game at the start of the second quarter to extend the lead to 21-0. The Bearcats had 150 rushing yards with 13:05 left to go in the first half. It was clear if the Lions were going to have any shot to come back, something would have to be done about the run game.

The Lions defense was unable to grasp a rhythm. On a third-and-long junior Nash Sutherlin caught a screen pass and fumbled as he was being drug to the ground. The Bearcats took the ball back and scored almost immediately after. This time it was sophomore quarterback Braden Wright who ran in the touchdown. Bearcats led 28-0.

The Lions’ mistakes continued. On what looked to be a productive drive, Lions’ quarterback Cade Brister threw an interception in Bearcats’ territory on the 24-yard line. The Bearcats capitalized. It was yet another rushing touchdown from 18 yards out. The Lions trailed 35-0 at halftime.

The Lions had absolutely no answer for the run. The Bearcats were up to 238 yards on the ground and out-gained Lindenwood overall 376-100.

The Bearcats’ defense continued to keep the door slammed shut on the Lions’ offense as they picked off another pass to start the third quarter. They ran in another score to extend the lead to 42. The Bearcats scored again before the Lions finally got on the board. The Northwest offense made its first mistake of the day and fumbled. The Lions recovered and a few plays later Brister found senior Erik Henneman for a 21-yard score. The Lions trailed 49-7. A Bearcat pick-six put the score at 56-7 going into the fourth quarter.

The Bearcats brought in some reserves and added one more score before the end of the game. 63-7, the Lions’ season ended.

The Lions end the season with a 9-4 record with wins over three ranked teams, that includes two top 10 wins. It also recorded its first Division II playoff appearance and win. Despite getting boat raced in the season finale, this team has built a young core of productive players and has undergone a complete culture change in the past three seasons. The 2019 Lions’ football season has set the standard for what the program expects for the future.