Finals power outage was not due to a transformer, rumors dispelled 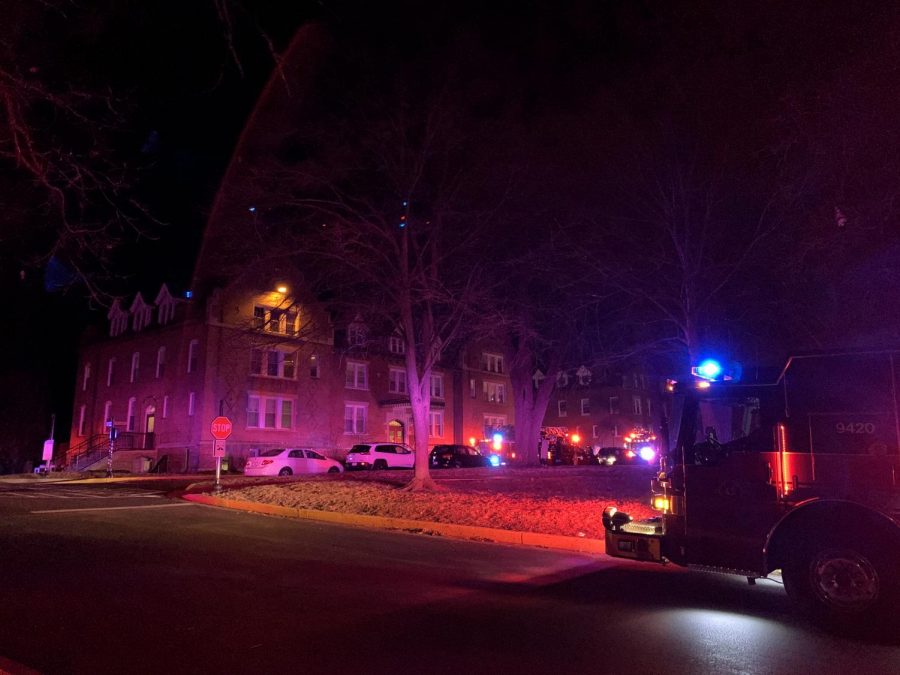 Firetrucks surround Aryes Hall, where a student pulled a fire alarm Dec. 10 in response to smoke.

The power outage that interrupted residents finals studying on the Heritage side of campus was not, in fact, due to a transformer blowing.

The cause of the power outage on Tuesday, which affected academic buildings like Harmon, Roemer and Young halls, was the result of an overhead power line burning up off-campus, according to Tim Crutchley, associate vice president of operations.

Around 550 students are housed on the Heritage side of campus. Aryes, Irwin, Niccolls and Sibley halls were evacuated by Residential Life and Public Safety. Students were told to go to either the Spellmann Center or the Library and Academic Resource Center.

President Porter himself bought Papa John’s pizza and delivered it to students hanging out in the Spellmann Dining Hall.

Ameren, the electric company for St. Charles city, did not give a reason as to why the power line burned up.

First responders initially said the cause was a transformer. Firefighters showed up to the scene after fluorescent lights went off in Aryes Hall, which emitted smoke and a burnt electrical smell. A student in Aryes Hall then pulled the fire alarm, according to Crutchley.

The firefighters found no fires in any of the buildings during the outage. Residential Life sent an email at 10:47 p.m. notifying students they could return to their dorms.

Although there were rumors of electronics getting fried from the outage, Crutchley said operations had no reports of any damage besides a couple of light fixtures in Ayers Hall.

Wi-Fi was down in all dorms from around 8 p.m. until 1 a.m. Wednesday morning. Apogee, Lindenwood’s third-party Wi-Fi provider, houses all of their equipment in one of the buildings affected by the power outage, according to Joe Zitta, assistant vice president of information technology.

However, the academic building’s Wi-Fi came back online by 10:30 p.m. Tuesday, according to Zitta, and successfully avoiding a delay for the inevitable final exams on Wednesday morning.