Opinion: Removing the invisibility from privilege

The cost of staying silent 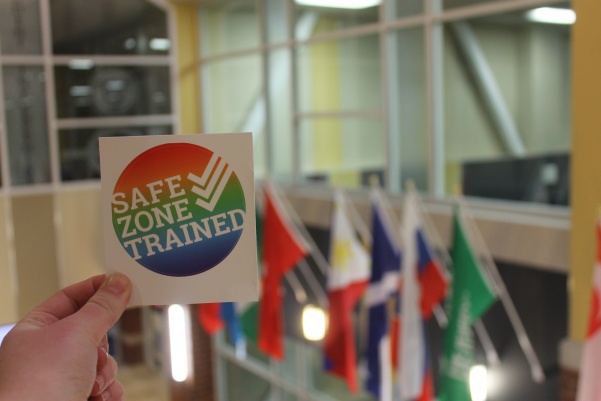 The Safe Zone Project is a campaign to educate campuses on LGBTQ rights.
Photo by Arin Froidl

Anna Reynolds (she/her/hers) is a senior at Lindenwood earning a double-major in History and Political Science and a minor in Gender Studies.

How many times in a day do we ask ourselves “What does this cost?” – when we’re buying a new shirt, when we’re paying our car insurance bill, when we’re standing in line at Starbucks (just kidding, probably not then).

But what about when we’re assessing our privilege? What does it cost us to step back and ask “How can I be a more informed, more helpful individual today?” – the answer is not a darn thing. However, despite the bargain price, few people take the time to assess their privilege.

Privilege is a rather unpopular concept, at least in name. It’s so tangled up in the web of “political correctness” that few are willing to unravel its significance. Privilege is a series of protections offered to a group at the top of a social hierarchy. This can be based on race, sex, gender, sexual orientation, socio-economic status, ability and more.

To be clear, privilege should not be synonymous to guilt. The privilege we have is the result of being born into arbitrary social structures which are invisible to us until they are pointed out. However, once aware of our privilege, we have an incredible opportunity to dismantle the structures which create inequities between groups.

Although most people possess at least some level of privilege, it can shift and change based on a person’s intersecting identities. Every person maintains multiple identities, and in any given situation, it is likely that only one or two are dominant. Whether or not, those person’s privileged identities may affect how they are treated in that situation. For instance, I am privileged in my identities as white, and as cisgender. However, I am not privileged in my identities as female and as queer. Depending on the situation and which identity is perceived as most dominant by my peers, I may be offered more or less respect.

Here at Lindenwood, students are provided with a number of opportunities to educate themselves on privilege. Safe Zone training educates participants about LGBTQ+ identities and gender while examining prejudice, assumptions, and privilege. Implicit Bias Training opens dialogues about racial bias and microaggressions. Throughout the year, the Diversity, Equity and Inclusion Task Force offers panels on a broad range of subjects including “How to be an ally” and “Gender equity in Athletics.” Each of these events is open to faculty, students and administration and is completely free of charge.

But still, the unspoken question hangs thick in its silence: “What’s the cost?,” is it the two hours you would be taking out of your day to attend a Safe Zone or Implicit Bias training? What about the points of view you might encounter which challenge your own? Some fear the judgment of family and friends for acknowledging their privilege and changing their behavior accordingly.

If we, who have privilege, such as being white, straight or cisgender, collectively choose to live in ignorance of our privilege, we deny validity to those who don’t fit our socially-constructed mold of acceptability – and who are we to do so? Acknowledging privilege includes acknowledging that social spaces, such as classrooms, are created within the mindset of heteronormativity and a binary experience. Safe-Zone training helped me realize that as a cisgender person, I have the privilege to create an inclusive, non-binary space within my classes simply by adding my pronouns at the beginning of the semester introductions. This simple addition offers a reminder that pronouns should not be assumed based on appearances and are not simply “male” or “female.”

To our faculty and administration who are hesitant to be Safe Zone and Implicit Bias trained – I need you to know that until you acknowledge your privilege, our campus cannot possibly be as strong and inclusive as it has the potential to be. The world is not binary and Lindenwood is an extraordinary microcosm of its non-binaristic diversity. You have the ability – the privilege through your authority – to prepare the minds and hearts of students for this non-binary world into which you will release us.

To faculty and administration who continue to take issue with pronouns – take a step in the right direction and add yours to your email signature. And to my fellow students – you are part of the solution! Attend a Safe Zone or Implicit Bias training. Attend a DEI Diversity Dialogue. Acknowledge your privilege and ask yourself how you can make a difference.

Privilege is an issue which manifests in institutions, but is perpetuated by individuals. This means that, although the institution of education is already structured in privilege, we, the students, faculty, and administration have the agency to choose to dismantle it. My name is Anna Reynolds, my pronouns are “she/her/hers,” and I’m choosing to no longer pay the cost of staying silent about privilege.