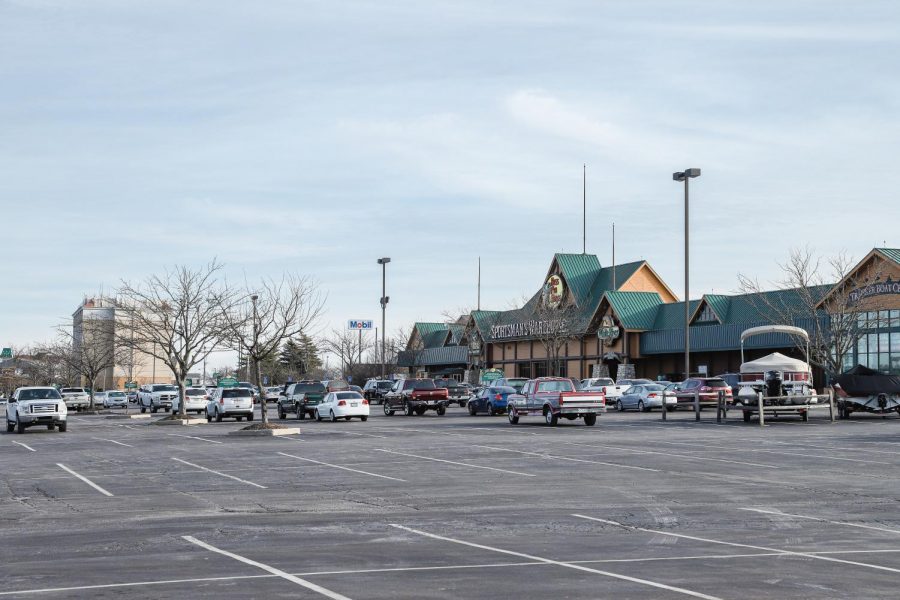 The parking lot at Bass Pro Shops on Boone's Lick Road may be a place where Main Street visitors will be able to park and take a shuttle to downtown St. Charles if lots are full.

St. Charles City and County are planning to use technology to solve parking problems in downtown St. Charles.

A smart parking system, planned to roll out next year, will use cameras to monitor parking availability and will shuttle guests from other areas to downtown St. Charles during special events.

The tax-funded project has the goals of reducing carbon emissions and growing the city’s tourism capacity.

Brad Temme, Director of Engineering for the City of St. Charles, said the town suffers from limited parking during special events in the downtown district. Hundreds of thousands of people come to events like Festival of the Little Hills, but there are only 3200 parking spaces downtown. Because of this, drivers said in a survey they spend an average of nine minutes looking for a spot.

“With the inavailability [sic] of parking and it being such a challenge to get people into parking spaces, it can, over time, diminish our ability to draw that many people downtown, because, ‘Hey, it was such a hassle last time I went. Why would I come back to St. Charles?’” Temme said.

When lots downtown are full, the smart parking plan will use digital road message boards to redirect visitors to park in other lots, including at the Streets of St. Charles, Family Arena, Convention Center, and the Bass Pro Shops shopping center. Electric shuttles will then take them to the downtown area.

Temme said the project will cost $1 million in total. St. Charles taxpayers will pay $100,000, the county will pay another $100,000, and the rest of the funding will come from a federal grant to reduce air emissions.

The program’s parking data may be used in a navigation app such as Waze to show where parking is available.

In a city council meeting last month when the plan was discussed, Mayor Dan Borgmeyer joked, “So you could drive down Main Street looking at your phone to see if there’s any parking spaces?”

Temme said it is not intended for the app to distract drivers.

Similar parking projects are already in place in East and West Coast cities, but this would be the first in the St. Louis area, he said.

St. Charles City Traffic Engineer Matt Seggerman said the plan is estimated to reduce daily greenhouse gas emissions from cars by 30 percent from drivers spending less time looking for parking. After it is implemented, there will be a study to determine its actual impact on air quality. There are not formal estimates for how much money the project will bring to the city’s economy.

Temme said because of land prices in St. Charles, it is more efficient to bring people to events from other parts of town, rather than building new parking facilities downtown. For the $1 million to be spent on the plan, the city could only build 50 parking spaces.