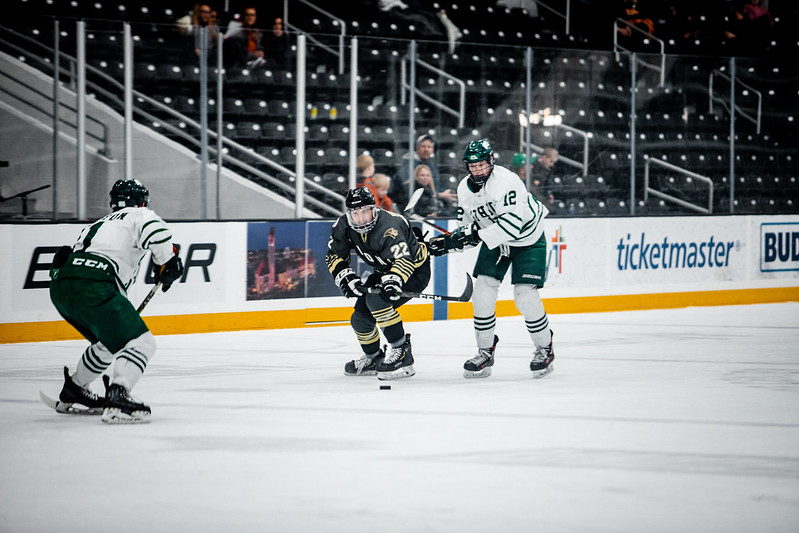 Hosting fellow top-15 team in the No. 13 Oklahoma Sooners, the No. 3 Lindenwood Lions couldn’t find a way past Sooners goalie Phil Babb as they lost 3-1.

“Everything I asked our team to do, I felt we did,” head coach Rick Zombo said. “We came against a goaltender that was outstanding. It was just one of those things where they got two more goals than us.”

Oklahoma got off to a soaring start inside the first two minutes of the game. On a 2-on-1 break in the offensive zone, Jared Mara located defenseman Luc Whyte on the far side to give the Sooners a 1-0 lead with 18:09 left in the first period. A few minutes later, Lindenwood’s Aapo Nurminen took a boarding penalty to put the Sooners on the man-advantage.

Despite being down a man, Lindenwood was able to get on the board with a shorthanded goal from Hayden Ursulak. After Ursulak laid a heavy hit across the blue line, Jordan Klimovsky picked up the loose puck and returned it back to the goal-scorer to even up the contest at 1-1. The goal was Ursulak’s fourth this season.

“I saw the puck on our side of the blue line,” Ursulak said, “I figured I’d head to the net as I always do, and I found a nice greasy one.”

There were a number of quality chances for the Lions after their first score, but Oklahoma goaltender Phil Babb was able to keep the score tied up at the end of the first period. Lindenwood led in terms of shots 17-8 heading into the second.

Opening up the second with an early strong chance was Lindenwood, but again Babb was there to deny it with an athletic right pad save. With 13:28 remaining in the second period, Nurminen took his second penalty of the night after he was called for a cross-check. But another penalty ended up being another penalty killed, as the Lions and goalie Cooper Seedott kept the Sooners off the board.

“Our penalty kill is very similar to the identity of our team,” Zombo said. “We like to play fast, we play high-risk. We worked a lot on it this week.”

The Lions followed that kill with another one a few minutes later after Hayden Dawes was called for charging with about eight minutes left on the clock. Lindenwood tried to turn all of this momentum into a goal on the other end, but they continued to struggle to find a way past Babb in goal for Oklahoma, who made 37 saves after the first two periods. The score remained 1-1 going into the third.

Around five minutes into the third and final period, Seedott made back-to-back pad saves that led to Andy Willis getting behind the Oklahoma defense on the break. While he couldn’t find the back of the net, Willis was able to draw a penalty and give the Lions their second power play of the night.

Behind more stellar play from Babb, Oklahoma was able to kill-off the penalty and keep the score at 1-1 with about 12 minutes to go. A couple of minutes later, the Lions had one of their better chances of the night as Alex Kalau had nearly an empty net in front of him but his shot trickled right past Oklahoma’s goal.

“He [Phil Babb] played really well tonight,” Ursulak said. “We need to keep getting those quality shots and they’re bound to go in. Luck’s gonna have to come our way sometime soon.”

Lindenwood was awarded its third power play with under seven minutes remaining, but they were unsuccessful once more, as the game remained tied at one. The failed opportunities on the man-advantage proved costly for Lindenwood near the end of the third.

Off of a slap shot from the corner, Oklahoma’s Issac Bosse sent a rocket towards goal that beat Seedott to make it 2-1 Sooners with 1:03 remaining. They would score an empty netter with 24 seconds left to go, making the final score 3-1.

“Our sensitivity meter has to go down,” Zombo said. “We’ll probably make one adjustment to the lineup, and kudos to Oklahoma. It’s a team that did what they needed to do to get a win on the road.”

Lindenwood out-shot the Sooners 55-30, but ended up with the loss nonetheless. The Lions now sit at 16-7 overall, and will have a rematch against Oklahoma tomorrow at 1:30 p.m. in the Centene Community Ice Center.