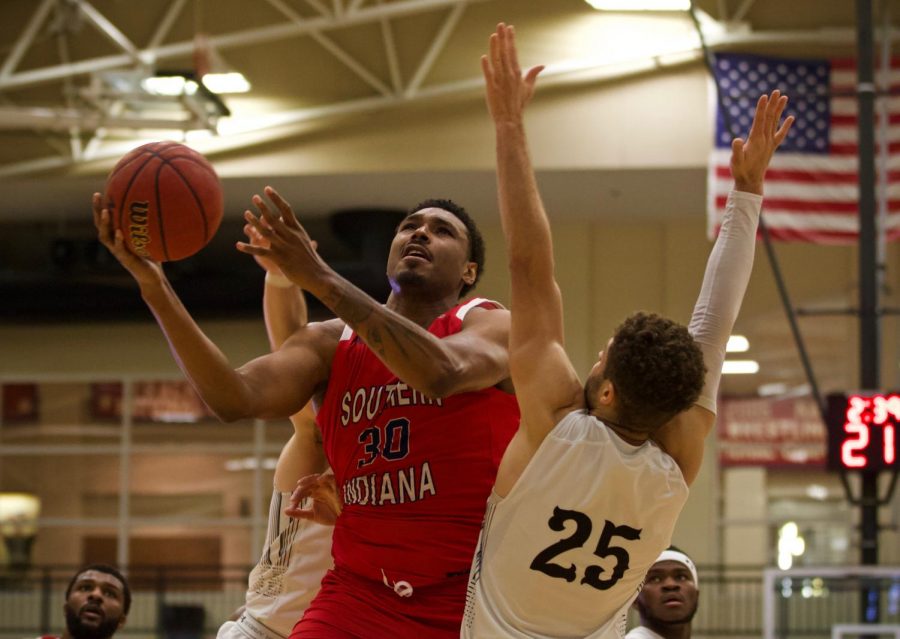 Southern Indiana forward Josh Price (No. 30) scores on Lions guard Cameron Scales in the fourth quarter. This game marks a 9-game losing streak for the Lions.

It was another difficult day for Lindenwood men’s basketball, who ran into a red-hot Southern Indiana Screaming Eagles offense, with the Lions falling 83-74.

“I’m proud of our team,” head coach Kyle Gerdeman said. “They’re working, they’re competitive, we’re right there. It’s just a credit to this league to how good it is, and how good your team has to be to win games at home or on the road.”

Luka Radosevic got off to a hot start for Lindenwood, scoring the team’s first five points before Vijay Blackmon sank a deep three to tie the game at 8-8 at 15:54.

After this, at 15:20, a long stoppage in play occurred due to both shot and game clock issues inside of Hyland Arena.

The problem was solved several minutes later, with both teams coming out of the break looking well-rested on offense. They traded buckets on both ends, with T.J. Crockett hitting an open jumper to make it 14-14 at 12:08 heading into the first true media timeout of the game.

“[The long break] probably helped us,” Gerdeman said. “We’re not playing a lot of guys, so they got a little bit of extra rest after the first five minutes.”

Out of the media break, Radosevic continued to shred the Screaming Eagles’ defense with his second three-pointer in the early minutes of the contest to give him a quick 10 points. Lindenwood gave up a three the next possession, but followed it up with buckets from Kace Kitchell and Crockett to make it 22-17 Lions.

A few minutes later, Cameron Scales launched a 9-0 Lions run that was capped off by a 2-2 trip at the line for Crockett that gave Lindenwood a 31-20 lead with 7:11 left in the first half. Southern Indiana responded to this in a big way, going on a 12-2 that spanned for four minutes where they cut the Lions’ lead to just 33-32 with just under three minutes left to go in the first.

“They’ve [Southern Indiana] been in a lot of big games, they know how to respond,” Gerdeman said.

Lindenwood held on to their lead for the remainder of the first half, ending the first 20 minutes with a 40-36 advantage over the Screaming Eagles. The Lions shot 43.8% from the field, and were 4-11 from long range. Crockett led the team in scoring with 13 points while also collecting three rebounds.

Southern Indiana quickly tied the game at 40-40 with the first two scores of the second half. They carried this momentum into the half’s first media timeout, when a Josh Price layup put the visitors up 47-44. The Screaming Eagles continued to add on, outscoring the Lions 19-8 through the first eight minutes of the second, and a 55-48 lead overall.

“Their plan was to come out and get to the basket,” Gerdeman said. “They threw it inside to their big guys and got some buckets. We had an opportunity to get off to a good start offensively, and we didn’t.”

It was all Southern Indiana over the course of the next three minutes, draining consecutive threes while going on a 12-2 run to put the away side up 63-50 with nine minutes left in the game. Lindenwood needed an answer, and they got one at the 7:45 mark from Jalen Newsom who drilled a three-pointer from the top of the key to make it a 10-point game.

The Southern Indiana lead never got beyond 14 points over Lindenwood, but it was still too steep of a hill to climb for the Lions, as they fell to the Screaming Eagles by a final score of 83-74. Southern Indiana shot 48.3% from the field, and went 5-10 in terms of three-point shooting.

“I still believe as long as we keep doing things the right way and our mentality stays in the right spot, we’ll be alright and we’ll find a couple wins here at the end,” Gerdeman said.

On a nine-game losing streak, Lindenwood now sits at 8-12 overall and 2-10 against GLVC opponents. The Lions will be back on the road next week, starting on Thursday at Truman State.