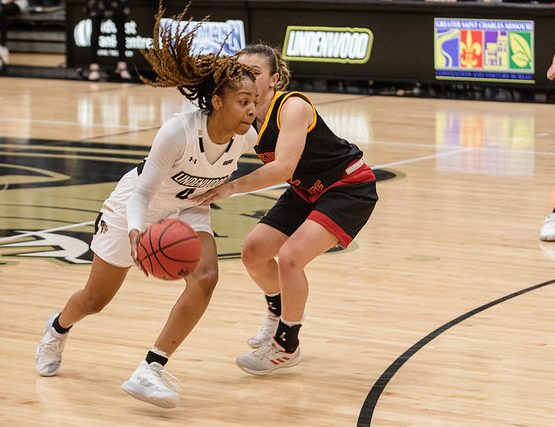 Hennessy Handy passes by her opponent during a match against Pittsburg State on Nov. 13, 2019.

The Lindenwood women’s basketball team lost 81-68 to the University of Southern Indiana Screaming Eagles in a game which saw the Lions’ Lindsey Medlen score her 1,000th career point.

This season has been an up-and-down roller coaster for the Lions, who are now 6-7 for their last 13 games after starting 5-0.

Entering the game, the Lions boasted the third-best scoring offense in the Great Lakes Valley Conference, averaging 77.1 points per game. Leading that offensive charge is Kallie Bildner, who is averaging 20.9 points and 11.3 rebounds per game. On Thursday night, Bildner joined the “1000-1000 club”, with over 1,000 career points and 1,000 career rebounds. She finished with 25 points, 12 rebounds, two steals and two blocks against Southern Indiana.

Joining Bildner in the 1,000-point club is Medlen, who scored her 1,000th point late in the fourth quarter against Southern Indiana with a Kobe Bryant-esque turnaround mid-range shot. She finished the game with 15 points, 11 rebounds and seven assists. She is now only five assists away from breaking the Lindenwood assists record.

In Saturday’s game, the Lions allowed the Eagles to remain hot in the second half. After leading 33-27 at halftime, the Eagles scored 24 points in both the third and fourth quarter.

The Lions’ offense was unable to complete the second-half comeback, shooting 7-18 from the field in the fourth quarter.

At 11-7, the Lions will embark on a four-game stretch away from Hyland Arena. The next game is Feb. 6 at Truman State University, while the next home game is Feb. 20 against Rockhurst University.