UPDATE: Candidates’ presentations for provost come to an end 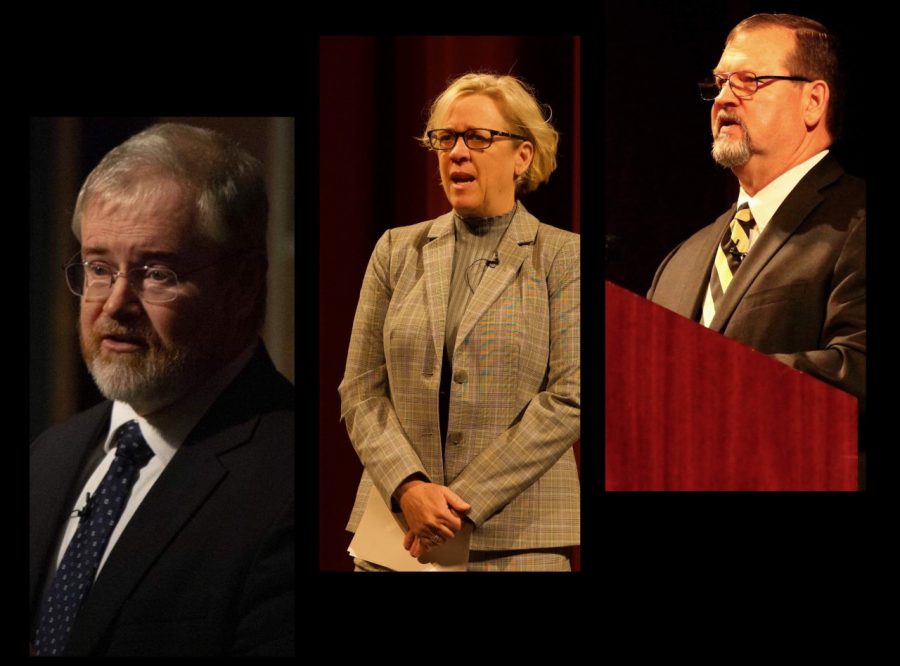 The final three candidates for Lindenwood University’s next provost spoke to faculty, staff, and Lindenwood Student Government members this week in the J. Scheidegger Center.

Each candidate spent fifteen minutes describing their professional background and what strategic actions the university should take to position itself to serve students in 2025, a topic selected by the screening committee. Then, they answered questions from the audience.

The three candidates, selected out of 75 applicants, consist of the current dean of health sciences, Cynthia Schoeder, and two candidates from outside Lindenwood, Mark Arant and George Reed.

All three candidates also have a background in science, with Arant holding a doctorate in organic chemistry and Reed having a master’s in forensic science.

The provost is responsible for all the university’s academic operations.  All professors, deans and academic staff, such as in the library and writing center, ultimately report to the provost.

The position opened up last semester after the current provost, Marilyn Abbott, announced she is retiring in June. Abbott has worked at Lindenwood for 22 years and has been provost since 2016. She was previously Lindenwood’s dean of Sciences.

Jack Bedtke, the LSG vice president for student relations and involvement, said he is optimistic that all three candidates will grow the university and expand opportunities for students.

He said LSG will submit a response to the administration about the candidates.

“We’re more than welcome to listen to other students if they know any of the candidates, but a lot of it really comes down to the cabinet and the president, and the people that are going to be working with him on the day-to-day,” he said. “We’re trying to give that perspective as students from what we know and what we want to see in the classrooms.”
Mark Arant
The final candidate to speak, Mark Arant, said Wednesday morning that he needs to become familiar with Lindenwood before proposing changes, but suggested specific areas of focus, including expanding hands-on learning and science, technology, engineering and math opportunities.

“Lindenwood is doing things really, really well in a number of areas, but as with every university, there are opportunities,” he said.

Arant chose to speak in the audience rather than from on stage because he said he likes to be among the people he is talking to.

“If I could ever have a room large enough, I would have a round table, because everybody’s ideas are as important as everybody else’s,” he said.

The self-described “redneck” graduated with a bachelor’s in chemistry from Louisiana Tech University before earning a doctorate in organic chemistry at the University of Alabama.

Regarding how Lindenwood should position itself for the future, Arant said the university must be “fully invested in data sciences.”

Furthermore, Arant said universities must not just provide information, but show students how to apply it.

“We’ve got to understand that we’re no longer sages on stages,” he said. “That’s not who we are anymore. You do realize the iPhone came out in 2007. That was 13 years ago. Access to facts is very easy now. Our responsibility as university faculty [is] now to teach the students to responsibly use that information, and not just give it to them.”

Because of this, Arant supports increasing hands-on learning experiences inside and outside the classroom, including through technology such as virtual reality.

Arant also said Lindenwood must ask how it is serving first-generation college students and make sure faculty interacts with students, including in online classes.

In the Q&A session, he said he often responds to emails with an in-person meeting.

“If a staff member emails me, you might see me show up in your office,” he said. “It freaks people out when I do that.”

He also talked about his vision of the purpose of a university.

“A university exists not to get people jobs,” he said. “We are supposed to cultivate a lifelong learner and a responsible citizen. If we do that, they will be able to land any job they go after, and they will be able to sustain that.”
Cynthia Schroeder
The second candidate for provost is an internal candidate who said she has some advantages due to her knowledge of Lindenwood and its culture.

“I think I have the advantage that I don’t have to take a year to figure out what I’m going to do,” Cynthia Schroeder, dean of health sciences, said. “I could start as early as they say ‘Hey, we want to offer you the job,’ and I would say ‘Great, I would love to start working with all of you in all of the things we need to address as soon as we can.’”

Schroeder is the only candidate from within Lindenwood being considered for provost, said Deb Ayres, vice president for Human Resources.

She then became program director at San Jose University after obtaining her doctorate, where she spent three years before moving back to the Midwest, where she worked for Southern Illinois University-Edwardsville for seven years.

Then, Schroeder applied for a position at Lindenwood.

“Our provost [Marilyn Abbott] was actually the dean of sciences at that time, so I have to thank her for hiring me as an adjunct,” she said. “[I’m] thankful, because it’s been 10 years and I love being here, Lindenwood is definitely a second family for me.”

Schroeder became an adjunct professor at Lindenwood in 2010 before becoming the dean of a new school – sport, recreation and exercise science – in 2014. Two years later, the school merged with the school of nursing and applied health sciences, which along the fire and paramedic science program, formed the school of health sciences.

After talking about her professional history, Schroeder moved on to the topic assigned by the committee: what strategic actions the university should take to position itself to successfully serve students in 2025.

“One thing I didn’t tell you about myself is that I am a single mom with two kids, and they happen to be teenagers and they are awesome,” she said. “But they are definitely a smartphone generation, so I look at them and I think, ‘How in the world am I going to learn?’”

The dean said new generations don’t learn the same way, and attention spans are much shorter.

“Instead of trying to fight it, we need to learn how to work with it,” Schroeder said. “We want to have more hands-on, moving around.”

When asked about changes in academic policy during the Q&A, Schroeder said the decisions need to take into account the students and faculty opinions before making any changes, as well as knowing what the change itself will entail.

“I need to be thoughtful, lots of input,” she said. “Finding out whether a policy needs to be changed or not, and also communicating during the time as well as if it’s going to be changed, why it’s going to be changed. If it does change, rather than just saying ‘Sorry, I’m changing it.’ If I can’t say why, it’s probably not a good idea.”
George Reed
The first of three candidates for provost told staff, faculty and students on Monday morning that one reason he applied to Lindenwood was the opportunity to stay close to students, faculty and the community.

“I’m in the community a lot, it is how I was trained,” the candidate, George Reed said. “I hesitate to become a provost because I really like that part, I love being the face and bragging about the institution to people that maybe know a little bit or correcting misinformation. I want to fall in love with the institution and carry out that love to the community, and if I couldn’t do that, I wouldn’t want the job, quite frankly.”

Reed, a first-generation college student, earned a bachelor’s in criminal justice administration at the University of Central Missouri. He then attended The George Washington University where he earned a master’s in forensic sciences. Reed also earned a doctorate in public policy analysis and administration from Saint Louis University.

Reed served as an Army officer for 27 years in a range of positions, culminating his military career as a colonel and professor at the U.S Army War College. He has executive experience on multiple boards and has worked in academia since 2001.

The candidate spoke for 15 minutes about his professional background and the strategic actions the university should take to position itself to successfully serve students in 2025.  However, he said he needs to become familiar with the culture at Lindenwood in order to choose the right path of action for the university.

“Whoever comes and writes a prescription for this campus without understanding the existing culture, the history, and how you do things, that’s a rookie mistake,” Reed said.

After the presentations, the attendees were given a few minutes for a Q&A. When asked about balancing the history of Lindenwood – a mostly conservative school – and progress, Reed said that it is about finding the balance between both sides and loving the school and its history more than anything else.

“The one thing I want Republicans and Democrats to agree on is that they love the university,” Reed said. “Being in a university that has deep roots, and that understands the community and serves the community, that is super important to me.”

When asked about the reason why he left his previous job as a dean of public affairs at University of Colorado-Colorado Springs, Reed said he missed being in Missouri, his home state, and said he had “reached the stage of his life where he is ready for another challenge.”

“I could stay at the university, but when Lindenwood hit I just had to reach out, and one of the reasons is that this is my home and I have spent very little precious time in my home,” Reed said.