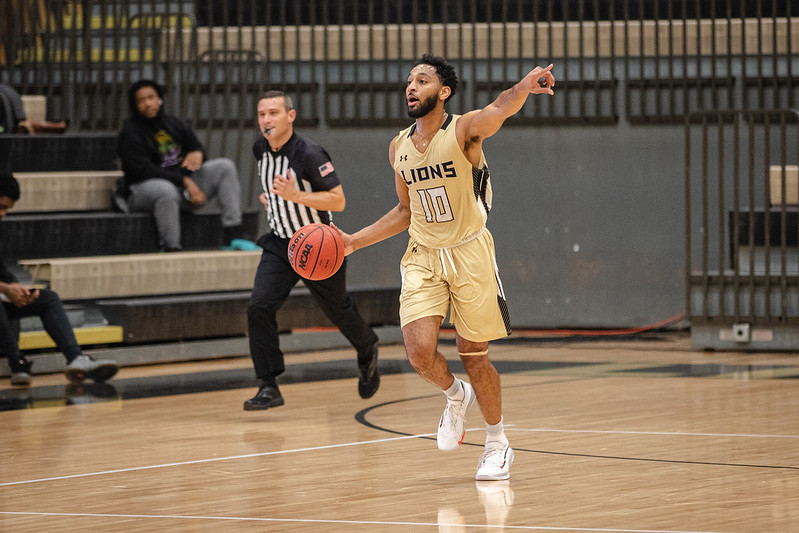 Vijay Blackmon (10) shouts instructions as he dribbles across half-court in a game against William Woods on Nov. 14. (File photo from Nov. 14)

In the first year of a new era for Lindenwood men’s basketball, the Lions have been on both the positive and negative side of long runs over the course of multiple weeks, now leaning more on the negative side.

Lindenwood opened up the season on a three-game winning streak but fell in their next three games to drop to a .500 at 3-3 on Dec. 7. The Lions bounced-back when they defeated Hannibal-LaGrange 100-50 on Dec. 12 a week later, starting another long winning run. Head coach Kyle Gerdeman’s squad moved on to a five-game winning streak up until Jan. 4 when they faced Maryville, the Lions’ longest since the 2017-18 season.

Looking strong at a record of an 8-3, the good times came to an end for the Lions when they headed into the second week of the season. Starting with a road trip to Bolivar, Missouri, Lindenwood lost a heartbreaker to the Southwest Baptist Bearcats 84-80 on Jan. 9. This was the first of a nine-game losing streak for the Lions that has lasted up until now.

The biggest struggles have been away from home this season. Lindenwood is 0-7 on the road, while they’re 6-5 at home and 2-0 in neutral settings. Despite the winless record away from Hyland Arena, the Lions have been narrowly beaten in the majority of these games.

In eight of their 12 losses, the Lions have lost by single-digits to their opponents. Three of the four losses that were in double-digits were against teams that are or were previously ranked (Missouri St. Louis and Indianapolis).

The Lions have been strong with their offense, which has been a consistent strength for most of the season. Lindenwood is first in the Great Lakes Valley Conference in scoring (82.4 points per game) and is averaging the second-most made three-pointers on the year (10.5 per game). The Lions have also been effective in earning extra possessions, sitting fourth in the conference in offensive rebounds per game (10.7).

Defensively, it’s a different story. No team has allowed more points per game (81.3) than Lindenwood, while opposing teams are shooting about 51% from the field against them, the highest mark in the league. The Lions also are 14th in terms of defending the three-point game, with the opposition averaging 38% from long-range.

Individually, it has been a gigantic leap for junior T.J. Crockett. Entering his first season as a full-time starter, Crockett has been dominant by leading the GLVC with 21.3 PPG on an efficient 46% from the field. The junior guard ranks 32nd in the country in scoring as well. Crockett is also the Lions’ top free-throw shooter at around 89% and leads the team in rebounds per game (4.9) and total steals (31).

Transferring in from Division I Indiana, Vijay Blackmon has gotten hot in recent games. In back-to-back games, on Jan. 25 and Jan. 30, Blackmon had career-highs in both. First against Illinois-Springfield, the junior scored 31 points on 11-20 shooting, which was then the best mark in his career.

Five days later, Blackmon went for 39 points against McKendree on an even better 11-17 from the field. Blackmon is second on the team in points per game (17.4) while shooting 42% from the field and 39% from three-point territory.

Other key contributors include ace three-point shooter Cameron Scales, who is averaging 10.8 PPG on 41% shooting from long-range. Senior Luka Radosevic has seen his play sharpen in recent weeks, scoring in double figures in five consecutive games and is now averaging 10.3 PPG this season.

At 8-12 overall and 2-10 in conference play, Lindenwood currently sits in 14th place in the GLVC ahead of Missouri S&T and Maryville. With eight games remaining, the next four on the road and the final four at home, the Lions have some work to do if they hope to finish among the top eight in the conference for a playoff spot.

They’ll attempt to get back-on-track on Thursday night when they visit the second place and 14-6 Truman State Bulldogs.