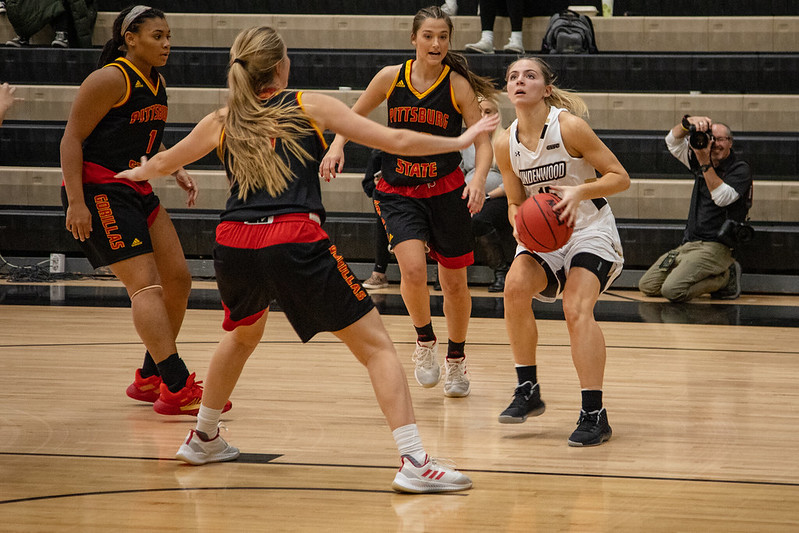 Lindenwood's Devin Fuhring gets set to fire up a shot with defenders surrounding her in an early-season game against Pittsburg State. (File Photo from Nov. 13)

To start a four-game road stretch, the Lindenwood women’s basketball team will travel to Truman University on Thursday to try to avenge their 81-68 home defeat at the hands of Southern Indiana.

The last matchup against Truman University was back on Nov. 24, 2018, which saw the Lions win 94-83 with Kallie Bildner, Devin Fuhring and Lindsay Medlen being key components for the victory.

In the past week, Bildner created the “1,000-1,000 club” – she scored 1000 points and grabbed 1000 rebounds, and became the first Lion to reach the thousand mark for rebounds. To add to that, Medlen scored her 1,000th point and broke the assist record for the Lions. Fuhring is second on the team this season in scoring, averaging 15.9 points per game while shooting 37% from three.

“I am very proud of Kallie and Lindsay for the success they’ve had throughout their careers,” head coach Katie Falco said. “They are part of an elite group of players and have certainly had a positive impact on Lindenwood women’s basketball.”

At 11-7, the Lions will enter a crucial inner-conference matchup with Truman University, who boasts a 15-4 record.

“Truman is an excellent team that is playing great basketball,” Falco said. “They shoot the ball extremely well from the three-point line. They are disciplined, smart and have a balanced attack offensively. We are excited about the matchup.”

The Lions have struggled defensively in the middle of games this season, with opponents going on frequent runs in the second and third quarters of games.

“We need to guard the ball and eliminate the number of three-point shots they get off,” Falco said. “And defending their motion will be important.”

After the four-game road stretch, the Lions will host four straight games at Hyland Arena.

“I am excited to see how our team makes a strong push here in the last few weeks of conference play,” Falco said.

The next Lions home game is Feb. 20 against Rockhurst University.