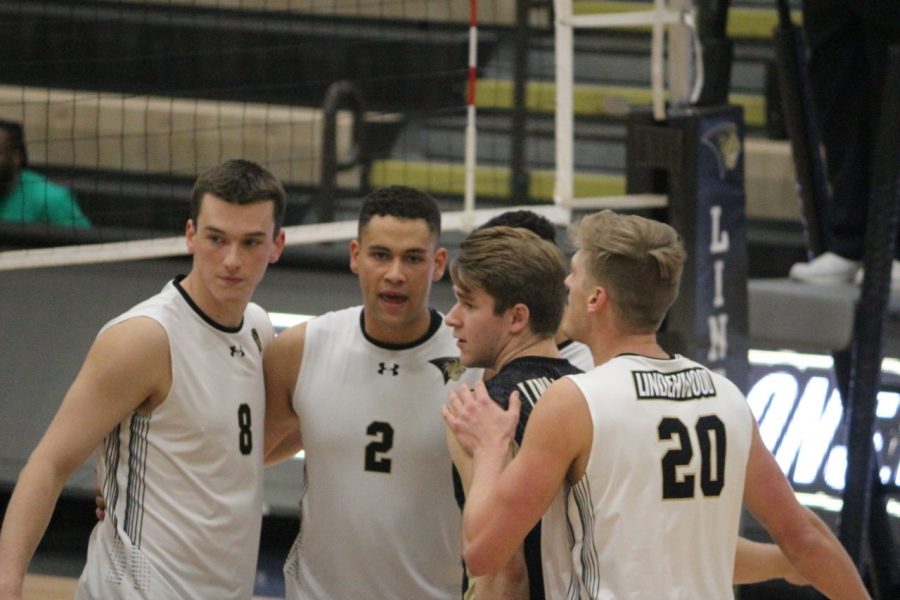 Men's volleyball players huddle up in a game vs Saint Francis on Jan. 17, 2020

The Lindenwood men’s volleyball team are hosting two-game series on Friday and Saturday against Cal State Northridge in Hyland Arena, and are looking to increase their two-game winning streak.

“CSun is a respected program around the country and has a lot of skilled players on their roster, but I think if we execute our game plan and scout we should be able to take it to them,” sophomore Cal Werths said. “I think that this season has gone pretty good so far. Sure we’ve had our growing pains but we’re making good strides to getting into top form for conference play.”

According to Werths, the Lions are “readjusting minor kinks,” working on new routes for attackers and other offense connections. The Lions roster includes four seniors, five sophomores, four juniors and six freshmen – and most of those freshmen have had some game time.

“We are still getting used to playing with each other, so adjusting to tendencies is another thing we’re working through,” Werths said. “We’re all working hard and I love working with all of my teammates because of the culture we’ve created.”

Werths said the Lions are improving their relationship on and off the court with “little things” such as huddles after a mistake or positive body language, two of the most important things they have been working on, as well as showing support both between the team playing and the players off the court throughout the entirety of a match.

“It just shows the guys that even though you made a mistake, you’ll be ready to execute the next play. Volleyball is extremely mental, so developing small positive habits like that can really turn a tide of a match,” Werth said.

The Lions previous winning streak was against Lincoln Memorial University on Jan. 10, defeating the Railsplitters 3-1 for their second encounter since February of 2018. Seven days later, the Lions defeated Saint Francis University 3-1 at home. So far, the Lions hold a 3-1 record against the Red Flash.

Captain Sam Schindler, a senior from Centerville, Ohio, has been leading the Lions to victory this season. Schindler kicked off the season recording a team-high five-blocks against Mount Olive on Jan. 9. He also helped the Lions out-block Lincoln Memorial by posting a total of eight blocks and recorded a team-leading .615 attack percentage when the Lions faced UC- San Diego – taking the match to five sets.

In the last match against Urbana, Schindler posted the best hitting percentage by an NCAA athlete this season – posting nine kills and 10 attacks with no errors.

The first match of the weekend series will take place at Hyland Arena at 7 p.m. on Friday, followed by the second match on Saturday at 7 p.m. as well.