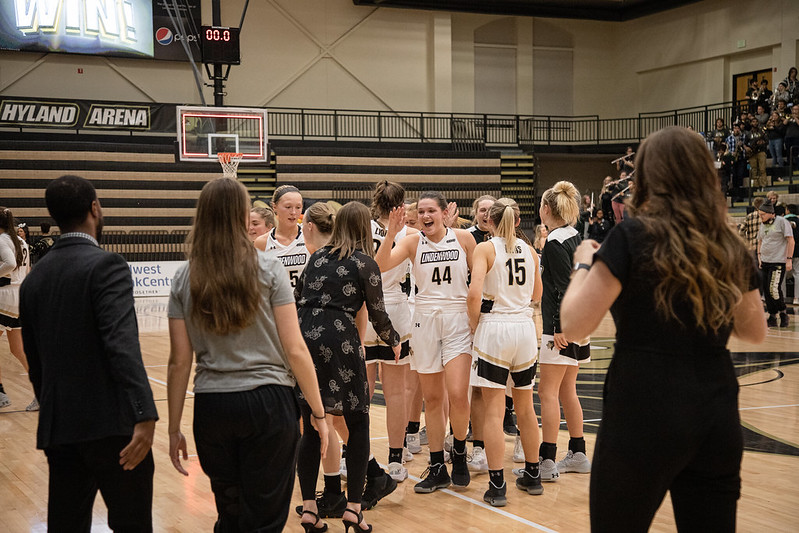 Women's basketball celebrates after a win against Pittsburg State on Nov. 13. (File photo from Nov. 13).

The Lions defeated Truman State 72-65. Kallie Bildner continued her dominance in her senior season against the Bulldogs, scoring 20 points and grabbing 16 rebounds on Thursday night. With seven regular season games remaining, Bildner is 108 points away from breaking the Lindenwood career record of 1,808 points.

Another record breaker is Lindsay Medlen, who scored 16 points, grabbed five rebounds and recorded three assists. She is two assists shy of owning the school record of career assists.

At 12-7, the Lions travel to Quincy University and play the 3-10 Hawks. In their next seven games, the Lions will face only two opponents with winning records.

In their last matchup on Nov. 26, 2019, the Lions beat the Hawks 71-48 in a game that saw the Lions score the same amount of points in the paint as the Hawks had total points.

To determine who plays in the GLVC championship, the top eight teams in the point rating system are selected. The Lions are currently sixth with 3.65.  There are seven games left for the Lions in the GLVC conference.

The Lions will go up against the Quincy Hawks on Saturday at 1 p.m. at Quincy, Ill.