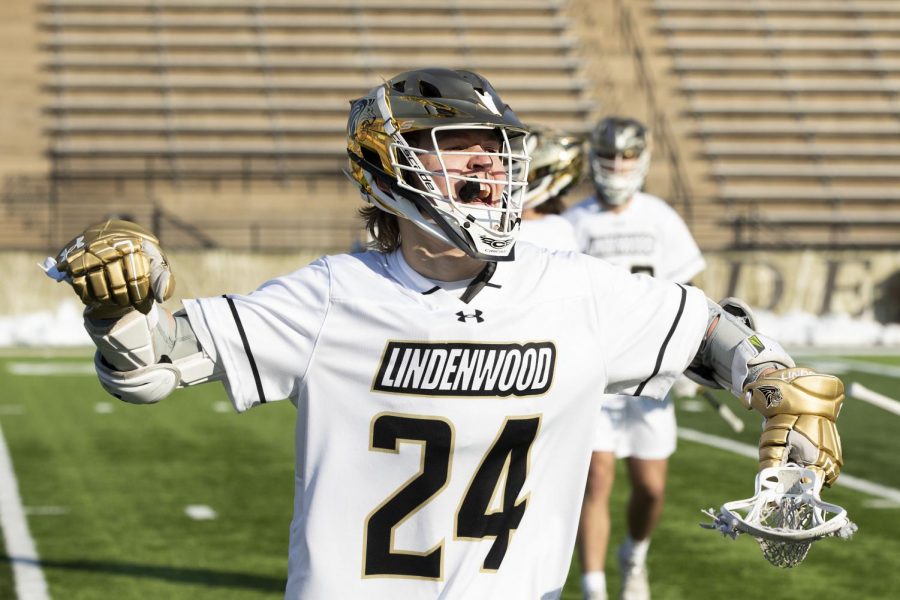 Grant Brunsvold celebrates after scoring his second goal of the game on Feb. 9. Lindenwood shut out Florida Tech in the fourth quarter and gained the lead 13-12 in the last 25 seconds of the game.

Out of all of the months in the year, there aren’t many that are as busy as February when it comes to Lindenwood sports.

With basketball and hockey in the final stretch of their seasons and the lacrosse, baseball, and softball teams starting their campaigns, it is the month for athletics all across the campus.

From the basketball courts to the rugby field, here’s everything that happened in Lindenwood sports over the past week.

For the first time this season, and almost certainly not the last time, baseball was cancelled for the week. Lindenwood had a three-game series scheduled for their home opener against Wayne State on Saturday and Sunday, but the games were called off early Friday morning.

At 2-1 overall on the year, the Lions’ home opener will now be next week instead, with a three-game weekend set against Ohio Dominican starting off on Saturday at 1:00 p.m. at the Lou Brock Sports Complex.

The Lions snapped a 10-game losing streak on Saturday when they traveled to Quincy, Illinois and upset the Hawks 74-64. Coming off a two-point loss to Truman State on Thursday night, the Lions put together one of their strongest defensive performances of the season against a Quincy team that sits right outside the GLVC playoff picture.

The 64 points were the second-fewest points the Lions have allowed in a game this season, while they also forced 14 turnovers on the defensive end.

T.J. Crockett had a team-high 24 points, followed by Luka Radosevic who had 18.

A trip to Southern Indiana awaits the Lions on Thursday night, before they play at McKendree next Saturday in what will be their final road game of the regular season.

Sitting in sixth place entering the week, Lindenwood improved their playoff chances with two wins against Truman State and Quincy. Facing off with the second place Bulldogs on Thursday, the Lions played one of their better fourth quarters of the season, outscoring Truman State 29-17 in the period. They won by a final score of 72-65.

On Saturday, Quincy made it close in the second half, but the Lions held on behind Kallie Bildner’s career-high 36 points. Lindsay Medlen broke the Lindenwood women’s basketball career assist record with now 392 in her career, and also broke the single game record in the NCAA era with 13.

Despite still being in sixth place, head coach Katie Falco’s squad is now three games up on Southwest Baptist, who is outside of the playoff picture at ninth in the GLVC. Lindenwood gets a rematch with Southern Indiana on Thursday, a team the Lions trail by one game in the standings.

Traveling down to Southeast Missouri State (SEMO), the Lions fell by a final total score of 193.925-193.600 to SEMO on Friday. Lindenwood outscored the Redhawks on the beam and bars, posting a season-high on the bars with a 48.750.

Senior Katie Bailey tallied her best score of the season at 9.850 in the bars competition. The leader on the beam was Ryan Henry, who put up a 9.850. Gayla Griswold led the way on the vault and floor, while Sydney Lopez was on top in the all-around.

Next Friday, Lindenwood will compete against Louisiana State, Missouri, and Iowa State at the Family Arena in St. Charles in the Gymquarters Invitational on Friday.

In a home-and-home series with Illinois, Lindenwood swept the Fighting Illini to improve to 19-7 on the year. Zach Mitchell and Brendan Murphy both scored in their 2-1 win in Champaign, Illinois on Saturday with Tommy Heinzmann assisting on both goals. Cooper Seedott made 29 saves in the win.

Back at home, Lindenwood got off to a hot start with a 1-0 lead early on. They never looked back, winning 4-1 and sweeping Illinois in the series.

In the weekend ahead, Lindenwood is looking at a road series with Oklahoma, a team the Lions split with on Jan. 31 and Feb. 1. This time, Lindenwood will travel out to Oklahoma for games  on Saturday and Sunday.

Hosting Mercyhurst University at the Centene Community Ice Center, women’s ice hockey earned a win to start off the two-game set on Friday night. Lindenwood got the first goal courtesy of Lauren Dabrowski in the first, before an action-packed second period that ended with the score being 2-2. Sierra Burt scored the winner in the third, giving the Lions a 3-2 win.

It was a defensive battle on Saturday, with Mercyhurst coming out on top this time around. After a goal in the first period, the visitors went on to shutout the Lions for the remainder of the game, winning by a final score of 1-0.

With three weeks left in the season, Lindenwood has a record of 5-19-3 heading into next weekend, when they’re back on the road to face Syracuse.

Getting off to a winning start in their 2020 season, men’s lacrosse played in an exciting affair against Florida Tech on Saturday, a game the Lions won 13-12.

No. 15 Lindenwood trailed 12-8 heading into the fourth quarter, which is when they sharpened up on the defensive end, shutting out Florida Tech in the final period.

Lindenwood scored five goals in the fourth to complete the comeback, with Carter Collins tying the game with :45 remaining, and then Leonard Jones finishing it off with just :06 left to go. Peter Covington led all Lions in scoring with four goals on the day.

Their next three games will all be on the road, with Mars Hill being first up next Saturday in North Carolina.

In a battle between two of the top 15 ranked teams in the nation, No. 9 Lindenwood topped No. 14 Colorado Mesa in Las Vegas, Nevada 19-7. It’s the 11th season in a row where the Lions have started a season off 1-0.

Head coach Jack Cribbin’s side was dominant from start to finish, outscoring its opposition 9-3 in the first half, then 10-4 in the second. Three different Lions tallied hat-tricks in the win, as Hannah Doughty, Carly Fedorowski, and Meghan Rea each found the back of the net on three separate occasions.

Lindenwood will play at home for the first time this season next Sunday, when they host Davenport at Hunter Stadium.

In the midst of a six-game stretch away from home, men’s rugby won a Saturday morning doubleheader at Arkansas State. The first of the two games finished 38-20, while the second was all-Lions, as the second XV won 39-5.

Lindenwood didn’t give a score until around the 70 minute mark in the second game. At 16-1 overall and 3-0 in conference play, the No. 3 Lions will next play at Clemson next Saturday. The second XV won’t play again until Feb. 29 at home versus Illinois.

At the Bearcat Open in Maryville, Missouri, Lindenwood saw six runners finish in the top 10 in their events. In the women’s 3000-Meter Run, Najwa Chouati placed third with a 10:36.99 while Austin Crowe was seventh in the men’s edition with a 8:36.45.

Rosette Hayte put up a 58.47 time in the women’s 400-Meter Dash, good enough for eighth overall and seventh in the GLVC. In the men’s mile, Ben Stasney finished fifth with a 4:18.29 time in the competition.

Next weekend, the Lions will compete in the Pittsburg State Gorilla Classic, running from Friday to Saturday in Kansas.

Lindenwood extended their winning streak to four with a sweep over California State University, Northridge on Friday and Saturday. The Lions won in four sets on Friday night, as their opponents had 26 errors compared to Lindenwood’s 11. The hosts won the final two sets to win 3-1 overall.

Saturday’s match went all five sets, with the Lions still coming out on top. They trailed 2-1 after three, but fought back to take the final three sets and win 3-2. A.J. Lewis led the way with 17 kills, followed by Diego Negron’s 14.

Now 7-4 overall, the Lions will have their first conference games next week at home against Purdue Fort Wayne and Loyola University Chicago.

Hosting Bellarmine, #7 wrestling decimated the visitors 35-3 on Thursday night. Carlos Jacquez was dominant in opening the night, winning his match via pin. The Lions went on to take a 15-0 lead early on and never looked back.

Lindenwood is 3-1 in conference play and 6-4 overall, as they prepare to host Kentucky Wesleyan on Tuesday night.