Jacques, Morrow lead the way on senior night for Lions’ seventh win of the season 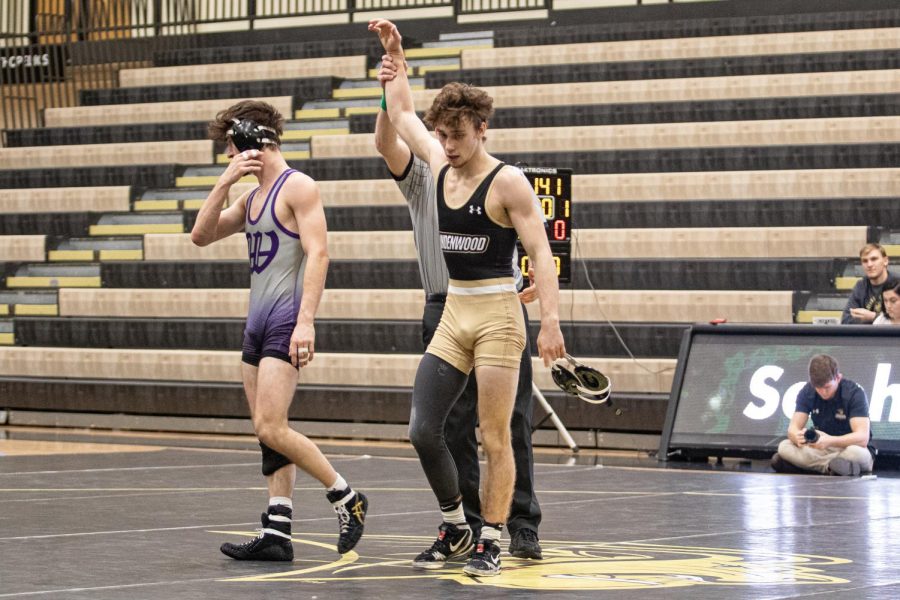 Tanner Hitchcock (right) won the match against a Panthers wrestler from Kentucky on Feb. 11 at Hyland Arena. The Lions defeated the Panthers 44-0

Hosting the Kentucky Wesleyan Panthers on Senior Night, the #7 Lindenwood Lions were in complete control from the beginning of the night, defeating the Panthers 44-0 in Hyland Arena.

“I think we looked okay tonight,” head coach Jimmy Rollins said. “I think we left some points on the table in a lot of matches, we need to clean that up.”

Despite the slight dissatisfaction from Rollins, Lindenwood led in a big way early on with a controlling 8-0 after the first few matches. First, it was Carlos Jacquez winning the night’s opening match 13-5. Tanner Hitchcock  followed with a 10-2 record and junior Colby Smith made it 11-0 afterwards, before Danny Swan won his contest 3-2 to extend the Lions lead.

“Colby brings a lot of flavor to his [matches],” Rollins said. “He probably came out a little overconfident, he usually puts up a lot more points than that, but he’s a very exciting kid to watch. Danny is getting a new feel, it’s very rare that you see somebody go four different weight classes. He hasn’t missed a beat, he did this for the team, and he’s having a great year too.”

Nate Trepanier continued the Lions success, making it 19-0. It was 41-0 before long, as junior Courvoisier Morrow took the mat and continued the huge performance for Lindenwood. Morrow earned a 10-4 victory, which turned out to be their final win on the night for a final score of 44-0.

Now, at 7-4 after another sizable win and as a top 10 team in the nation, Rollins knows that there is a target on his team’s back heading into the remainder of the season.

“You have to welcome it (target),” Rollins said. “When you’re up there in the top ranks, you have to accept those things as something that’s going to be a part of this. Being successful, there’s always going to be a target on your back.”

The Great Lakes Valley Conference tournament in St. Louis is up next for the Lions, starting up on Sunday at 10 a.m. in Hyland Arena.