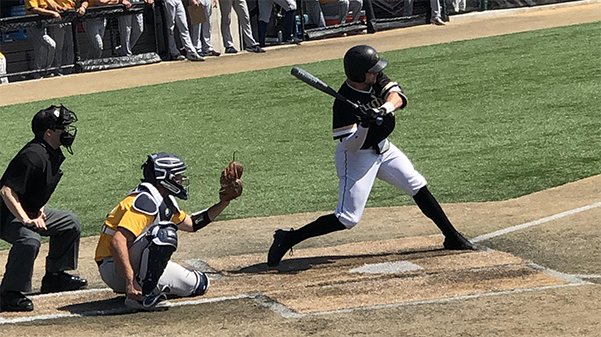 Catcher Ryan Sosknowski hits a single to drive in a run in game one of the series against Southwest Baptist on April 22, 2019.

After having their home opener cancelled last weekend, Lindenwood baseball is set to open home play this weekend vs Ohio Dominican.

Due to snow and cold temperatures, the three game series against Wayne State University was called off the Friday before.

Lindenwood opened their season with a three game series against Florida Tech in Melbourne, Fla. two weeks ago, playing the first one Jan. 31, then continuing the series following on Feb. 2, taking two out of three. The Lions won the first game in 10 innings 6-5.

They then dropped the first game of the Sunday double header 4-5, but right handed pitcher Kyle Hentis stepped up during the second game leading the Lions to a 12-0 victory. Hentis pitched six scoreless frames, stuck out ten, and only walked 3.

Head coach Doug Bletcher, who is in his 13th year at Lindenwood, is hoping for his team to continue getting on base; something they were successful in that 2-1 series win against Florida Tech. They had 26 hits in just the three games alone.

“It’s important that we don’t look for as much power particularly,” Bletcher said. “But on base, [we’re] attacking the freebies and getting on base with via any means possible.”

The Lions have never met with Ohio Dominican before, but despite being unfamiliar with the Panthers, Bletcher is looking for his team to play their game and not base it off of the Lions opponents throughout the season.

“It comes down to us having to play our game. We can’t let the opponents dictate what we do,” Bletcher said.

The Lions open the three-game series on Saturday at 1 p.m. with Bryce Beckman taking the mound, followed by sophomore Jacob Thompson in game 2 on Saturday. To wrap up the series, Hentis will take the mound at 1 p.m. on Sunday.