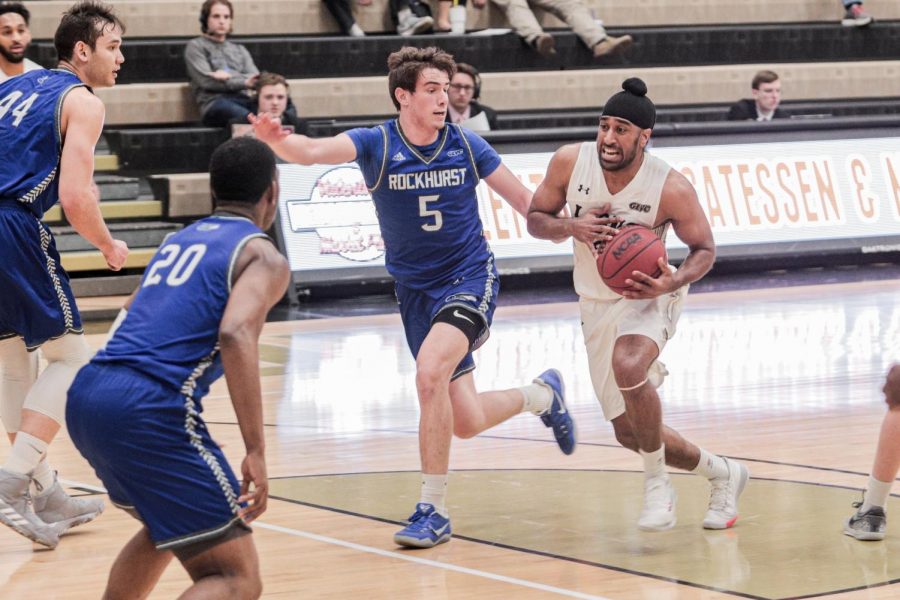 Lindenwood senior Sukhman Bhinder goes for a layup against Rockhurst defender Thomas Faber on Feb. 20. at the Hyland Arena.

Men’s basketball opened up their final home stand of the season with a thrilling, highlight-full 86-77 victory over the Rockhurst Hawks.

“We kept fighting tonight,” head coach Kyle Gerdeman said. “We got some misses, we got some big rebounds. The guys get all of the credit just for the effort they play with and the attitude they’ve carried themselves with.”

Rockhurst’s junior guard Curtis Lewis got off to a flying start, scoring six of his team’s first eight points with both of his two field goals coming from long range. The Hawks started 4-8 from the field as a team, giving them a 10-9 lead heading into the first media timeout at the 14:41 mark.

Crockett and Vijay Blackmon, Lindenwood’s top two scorers on the season, connected around 12:30 as Crockett found Blackmon on the opposite side of the court to make it a one-point game. A possession later, Blackmon again was on-point from downtown, giving the Lions a 19-17 lead with 11:41 left in the first.

“We [Crockett and Blackmon] can be pretty special,” Crockett said. “We can be scary when we’re on. If we keep working, staying in the gym, and continuing to get better chemistry together, there’s no way we can’t be the best duo in the conference.”

One of the highlight-reel plays of the first half came from Crockett, with another one of his signature emphatic blocks at the rim to make Hyland Arena roar. But with less than a minute left in the first half an even louder Lions roar came, as Blackmon sprinted through multiple Rockhurst players and slammed it home right on two Hawk defenders.

“That’s the biggest moment in the game, when you get a dunk,” Radosevic said. “Nothing beats a poster, and he [Blackmon] dunked on two guys. That was a huge game-changer.”

At the half, the score was 44-42 in favor of Rockhurst despite the momentum residing with the hosts. Blackmon’s 13 points were the most among Lions at the break, followed by Luka Radosevic’s 10 and Crockett’s eight.

Cameron Scales opened the second half on fire from beyond-the-arc, earning his team’s first six points with back-to-back three pointers to give the Lions a lead early on in the second half. Lindenwood faced a deficit around 12:00 in the second half, but it was Crockett who got hot once again. His first bucket came off another explosive slam dunk with a Rockhurst defender in the area, then a jumper to tie the game at 56-56.

It was end-to-end action in the later part of the second half between a Rockhurst team looking to improve their playoff positioning, and a Lindenwood group that was looking to play spoiler. This would continue all of the way to the final media timeout at 3:37, as the Lions led 70-69.

“You just have to stay calm, it’s easy to start getting frustrated because they’re scoring and when you’re missing shots,” Radosevic said. “You just have to keep those emotions under cool and we should be fine.”

With about 2:00 remaining, Radosevic gave the Lions a two-possession with a drive and pump fake along the baseline to make it 75-71. After holding the Hawks scoreless on their next possession, Crockett came the other way with yet another electric dunk to extend the lead.

“I think the five dunks were the most I’ve ever seen in a Lindenwood game,” Crockett said. “We were trying to get the energy, and that most definitely helped us get the win.”

After Crockett’s slam, Rockhurst scored two the next possession. However, a locked-in Crockett continued to be unstoppable down the stretch. The junior guard was fouled on his shot that went in anyway, and converted the three-point play at the line to make it 80-73 Lindenwood.

Lindenwood would hold on to its lead for the remainder of the game, earning the 86-77 upset win over a likely playoff team in the GLVC in Rockhurst.

“Through ups and downs, they show up every day and work,” Gerdeman said. “That’s why when you’re in a position here with not many wins, and you still show up in late February and win a big game at home, that’s all about the character they have.”

Crockett’s 23 points were the most on the team, followed by Radosevic with 21 and Blackmon with 19. The Lions grabbed their 10th win of the season, improving to 10-15 overall and 4-13 in GLVC play. Lindenwood will next host William Jewell on Saturday.