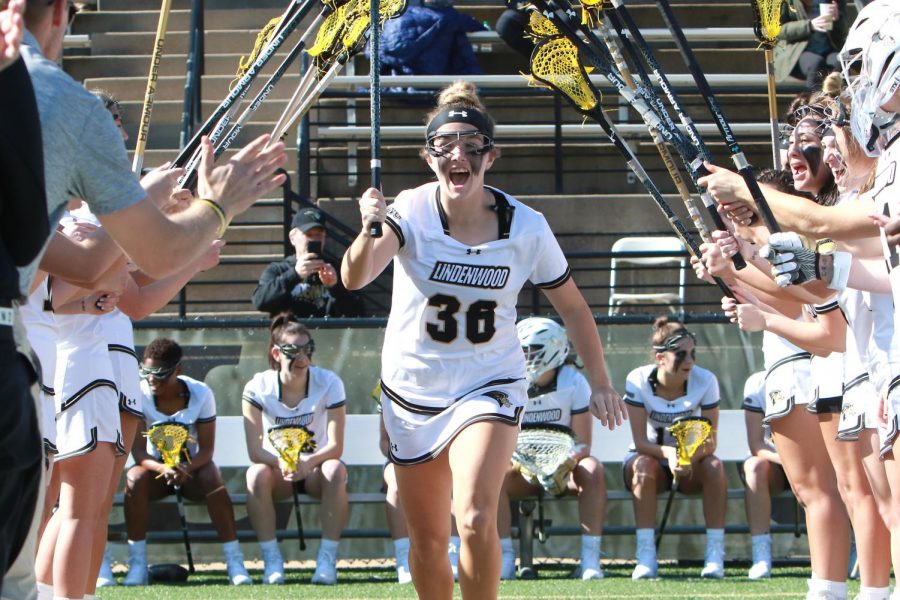 Erin McGuire (#36) sprints out as the Lions prepare to host Davenport in their 2020 home opener.

Being a student-athlete is a once-in-a-lifetime experience that some can take for granted.

But not these six women. They understand the importance of the opportunity to play competitive lacrosse, the sport that has consumed their early adult lives and created an everlasting bond between the six of them.

Bockstie and McGuire were exposed early in their lives to the impact of lacrosse on the East Coast. Coincidentally, the two also transferred to Lindenwood for their masters’ degrees in Business Administration.

McGuire’s entire life has revolved around lacrosse since the age of five. After earning her bachelor’s in psychology, McGuire decided to transfer to Lindenwood for her last year of lacrosse eligibility to play for the Lions.

“I drove 13 hours alone to nobody I knew,” McGuire said. “That was scary. But it’s the best decision I’ve ever made. The girls welcomed me with open arms and it’s the most supportive team I’ve ever been a part of.”

Bockstie had experience being a Lion. She attended Lindenwood her freshman year, but transferred to the University of Maryland, where she played club lacrosse and earned her bachelor’s in behavioral and community health.

“It felt like I never left,” Bockstie said. “I had such great friendships from my freshman year. The hardest part was getting back into the groove of playing at such a high speed with a lot of talented girls.”

The friendships are a driving force behind the team. Modl and Reader knew each other at a young age, playing competitive hockey and routinely traveling on hockey trips together. In eighth grade, they both made the transition to lacrosse due to the opportunities the sport presented.

Reader graduated with a major in exercise science and a minor in adaptive sports and recreation. She is currently pursuing her master’s degree in Business Administration.

“The growth and process, and that we’ve been able to experience this as best friends is really something special,” Reader said. “I don’t think anyone in the world can say that they’ve done that with their hometown best friend.”

Modl received her bachelor’s in public health, as well as a minor in health and wellness last May. While working towards her master’s degree in Business Administration, Modl is returning to action after opting to redshirt for her senior year.

“Us taking a leap of faith was a big testament to the work ethic of ourselves and the team,” Modl said. “It made me appreciate my teammates and I want to work hard for them.”

Doughty, an exercise science major with minors in chemistry and health and wellness, graduated with her bachelor’s degree last May. Like Modl, she redshirted during her senior year of undergrad.

Doughty started playing lacrosse at the age of four. Lacrosse was a way for her family to connect and bond, as her father was a coach. She is currently working towards her master’s degree in Business Administration.

“We have such a strong unit of people who’ve been playing together for such a long time,” Doughty said. “Erin (McGuire) fits in so nicely with our group that it feels like she’s been here forever. Same with Ellie (Bockstie).”

Smith, who graduated with a major in chemistry and is pursuing her master’s degree in Business Administration, started playing lacrosse in seventh grade. Lacrosse was a new sport offered in her home state of Arizona, so she was one out of roughly 100 girls in the area who were involved with the sport.

“I started lacrosse late,” Smith said, “but now I go home and coach when I can. So, we’re growing the sport slowly but surely.”

“The expectation has been set long ago,” head coach Jack Cribbin said.

With the women’s experience, comes high expectations for the season.

“Ever since the fall, our goal and expectations this season was to come out strong and win a national championship,” Bockstie said. “Not many people have the opportunity to play a fifth year, and it’s unique that we all get to step on the field with such high expectations and goals for the season.”

The oldest player on the team this season, Reader is adjusting to a position change, switching to midfielder after playing as a defender most of her life.  She is also affected by the fact that she tore her ACL in her freshman year.

“The change is a difference to my body,” Reader said. “It’s a lot more running and it has been an adjustment, to not only be 23 and playing a competitive sport, but also change my position and change how my body feels and how that feels physically four years after a reconstructive surgery on my knee.”

Similar to Reader, McGuire had hip surgery her sophomore year at Jacksonville University and is adjusting to the way her body feels after years of competing at a high level.

“When you’re young you can just run and go because you’re 18,” McGuire said, “but when you get older, it’s more about listening to and knowing your body. You want to run and go and do everything else, but you know you shouldn’t. It’s unique to have so many fifth years and it’s awesome because I have five other people who know exactly how I feel.”

“It was a hard decision to give up our senior year even though we were healthy,” Doughty said. “But we have the opportunity to compete for a national championship. It’s exciting and I can’t wait for the season to really get rolling.”

All the players know of their special opportunity this season. The NCAA Division II National Championship will be played at Hunter Stadium this year.

“I’ve never felt this before,” Doughty said. “No discredit to any of my past teams at Lindenwood, but I feel like this is a very unique and special team. We have six fifth-year seniors and six seniors, and I have this really special feeling about us. This is the strongest I’ve felt in a really long time.”

“We uplift each other on and off the field constantly,” Bockstie said. “People aren’t afraid to make mistakes.”

The accountability within the team is strong, with the team developing a culture that each player has a voice and positively affects one another.

“Within the past five years, we’ve gained a lot of knowledge,” Smith said. “We give that knowledge to the younger ones and they’re willing to change and make it work.”

During their sophomore year, Reader, Modl, Doughty, and Smith introduced team culture meetings to build a relationship off the field. Since that time, the bonds have become stronger and improved play on the field.

Because of class schedules, the six of them lift together at a different time than the rest of the team. It doesn’t take away from the overall team camaraderie, they said, but gives the MBA students an opportunity to further cherish their moments together.

“A family away from home is huge,” Modl said.

Playing as an Undergrad vs. Grad Student

“I get so sore so quickly,” McGuire said jokingly. “That year really makes a difference. But a positive is that we have class one day a week or online. So, we have more free time to hangout and build relationships or work extra. The open schedule gives me an opportunity to get to know my teammates.”

McGuire transferred to Lindenwood as one of the oldest players and expected animosity from her fellow fifth year teammates. But she found the opposite from the team.

Reader, along with Modl, Doughty and senior Carly Fedorowski, are the captains of the team.

“I didn’t know what I could totally get out of myself in that role before,” Reader said. “Now as a fifth year, I’m confident and really know what I’m doing. I’m embracing every second as a captain and as a fifth-year senior with these women.”

Many of the players, especially the captains, found the transition to be easier. Before being fifth-year students, the women were skeptical of their abilities as captains.

“We were the blind leading the blind,” Doughty said. “It’s crazy to see how we’ve grown, and we work so well together. We communicate in different ways and that makes us stronger. We utilize our strengths, and this is the strongest unit I’ve seen as a Lion.”

As all the players joked about being “the old grandma’s” of the team, Reader summed up the transition.

The only downside to having so many upperclassmen is that they eventually graduate or lose eligibility.

“It’s going to be tough to replace when that time comes,” Cribbin said, “but we’re not trying to dwell on that right now. They’re bringing in a wealth of knowledge to the underclassmen. The strong leadership is among the best I’ve had in my time here.”

Cribbin was vocal about the strength of the six graduate students and their impact on the team. Their voice has been heard by their teammates, and each brings something different to the program.

“I can’t imagine going throughout this journey without them,” Cribbin said.

None of the graduate students are thinking about life after lacrosse. The entirety of their focus is winning and enjoying their time on and off the field together: an embodiment of everything they’ve stood for as Lions, for which they will be remembered.