Softball off to strong start heading into a seven-game stretch 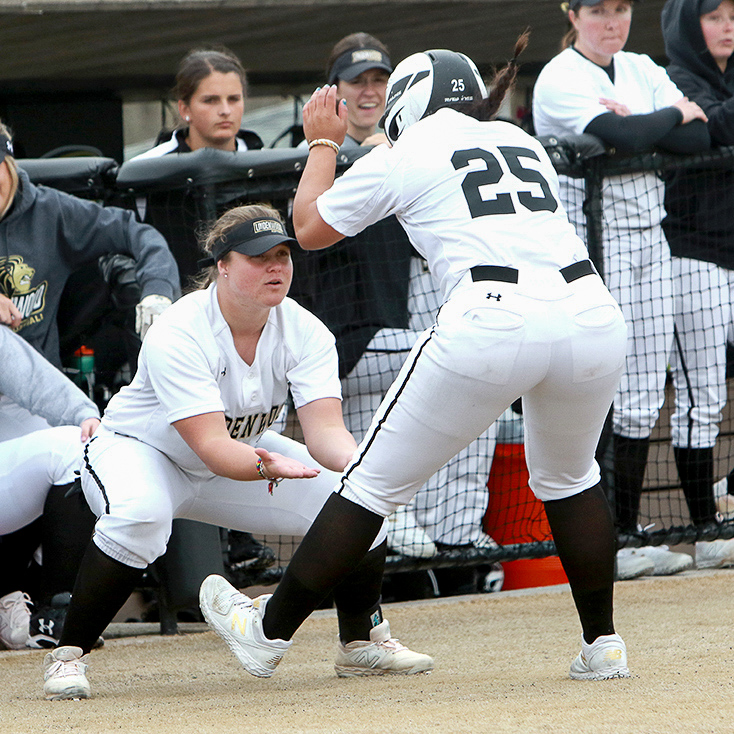 Senior Hannah Johnson goes to celebrate with her teammates in a home game for Lindenwood.

Lindenwood softball has started the season off hot, posting a 6-2 record through their opening eight games.

In those eight games, head coach Liz Kelly’s team has not only won by large margins, but has also been clutch in the tight games. In their most recent contest, Lindenwood beat #3 Grand Valley State 2-1. The Lions were led by freshman Amanda Weyh, who tossed all 10 innings for her team. According to Kelly, the runs not just in this game, but in her previous outing were unearned.

“She’s really settling in as a freshman, and she’s going to be a force,” Kelly said.

Along with Weyh, Kelly named all six of her seniors that have stepped up. Stormee Galka is one of those seniors. In the same weekend as the big victory over Grand Valley State, Galka pitched seven, one hit innings while striking out four for the Lions in their 2-0 victory over Ashland.

In all the wins that the Lions have had, they have scored runs when they needed to, or had great pitching step up as well. Weyh’s and Galka’s performances were just a couple of the major impacts that are being shown on the Lions softball team.

The Lions are in new territory as they enter their first season as members of the GLVC. According to Kelly, the entrance to the conference helps the Lions on and off the diamond, with great competition on and not as far of travel off.

“There’s really strong teams in the GLVC and we’re looking forward to it,” Kelly said. “There is limited travel vs. the MIAA [conference].”

The Lions are preparing for a busy stretch of the season, playing seven games in four days. Starting at 12 p.m. tomorrow, the Lions host Parkside for a three-game series at the Lou Brock Sports Complex. Next, the Lions will have back to back double headers vs. Lincoln and Saint Louis College of Pharmacy.

“There’s a lot of games, and I’m looking to go 7-0 this week. Once we get our bats going, we will really be a force to reckon with here,” Kelly said.