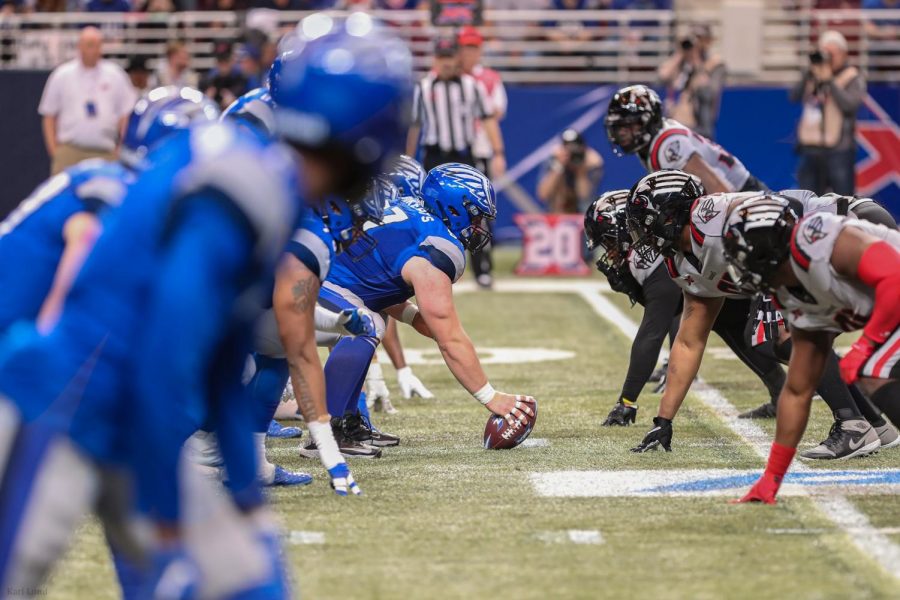 St. Louis center Brian Folkerts prepares to snap the ball back to Jordan Ta'amu in the Battlehawks' home opener against New York on Feb. 23.
Photo from Karl Lund.

Back at home for the second consecutive week, the St. Louis BattleHawks held off the Seattle Dragons to earn their third win of the season.

Jordan Ta’amu and the BattleHawks got the ball first on offense, but couldn’t get any positive yardage on the drive and were forced to punt after a three-and-out. Seattle didn’t fare any better on their opening drive, as they had to punt it away as well after a defensive start through the first three minutes.

St. Louis dealt with poor starting field positions in their first two possessions, getting the ball inside their own 10-yard line for both of them. Despite starting on their own four yard-line, the BattleHawks kept moving the ball down the field with Ta’amu hitting wide open receivers left and right.

This would eventually lead to Ta’amu eventually hitting De’Mornay Pierson-El across the middle of the field for a 27-yard touchdown for the game’s first score. St. Louis’ quarterback then found Marcus Lucas in the end-zone for the two-point conversion, giving the BattleHawks an 8-0 lead with 6:37 left in the first quarter.

The BattleHawks’ next drive was stopped at the Seattle 30-yard line, which allowed kicker Taylor Russolino to come on and hit a 48-yard field goal to make it 11-0. This would be the last score of the first quarter, with St. Louis ahead.

Seattle was finally able to score a few minutes into the second with a 41-yard field goal to make it 11-3. Both offenses were halted for around 10 minutes after this, until St. Louis got going again, being led by receiver L’Damian Washington’s 17 yard reception on a 3rd-and-10 to move the possession to the Seattle 19 yard-line.

On a 3rd-and-4 from 12 yards out, St. Louis ran an option to the left side where Ta’amu pitched it out to running back Keith Ford who bobbled, but collected the ball and took it into the end-zone. This score put the BattleHawks up 17-3, which they remained heading into halftime.

It was all BattleHawks at the break, out-gaining Seattle in total yards 211-55 after the first 30 minutes of play. Ta’amu was hot early-and-often, with 127 passing yards and one touchdown while also compiling 44 yards on six rushing attempts. Four different receivers had at least 20 receiving yards.

After the two teams traded punts to start the second half, Seattle started marching down into St. Louis territory about five minutes in. Backup quarterback B.J. Daniels helped lead the Dragons down to the goal line, where running back Kenneth Farrow pounded it in to make it 17-9. The visitors converted their one-point conversion, making it a seven-point game.

A long, lengthy St. Louis drive would follow after, with the BattleHawks getting all of the way to Seattle’s 20 yard-line. Russolino came on for the 38 yard try, which he again nailed to extend the host’s lead to 20-10 with 1:10 left to go in the third quarter.

The first play of the next Seattle drive was a big one, as Daniels found a wide-open Alonzo Moore for a 57 yard gain to quickly put the Dragons in BattleHawks’ end of the field. One play followed before the end of the quarter came, with St. Louis still up by 10.

Daniels hit his tight end Evan Rodriquez in the middle of the field for a 10-yard touchdown. Seattle went for a three-point conversion, but failed to complete it, keeping the score at 20-16 in favor of St. Louis with 13:14 remaining in the fourth quarter.

Ta’amu got back on track on the BattleHawks’ next drive, throwing a 43-yard dime to Keith Mumphrey along the sideline to move the home side into opposing territory. Running back Matt Jones ran for eight yards on third down to put the ball on the seven yard-line, setting up a 25-yard field goal from Russolino, his third of the day.

The field goal gave the BattleHawks a 23-16 lead with 8:10 left to go in the game. Seattle faced a roaring St. Louis crowd the next time they had the ball, and with the pressure on, Daniels was picked off on a 3rd-and-20 by Will Hill III for the game’s first turnover with 3:56 remaining.

With time winding down, the BattleHawks were able to finish the game off by running out the clock and securing the 23-16 victory in their second home game of the season.

St. Louis is now 3-1 through the first four games in franchise history, sitting in first place in the East standings. Ta’amu finished with another strong all-around performance, tallying 264 passing yards and one touchdown, while also being the team’s top rusher with 68 yards on the ground. Pierson-El was the BattleHawks’ leading receiver with 71 yards and one score.

Next Sunday, St. Louis will travel to Washington, D.C., to take on Cardale Jones and the Defenders in a battle between the top two teams in the East.

Editor’s note:  This article was produced in collaboration with the campus radio station, KCLC.