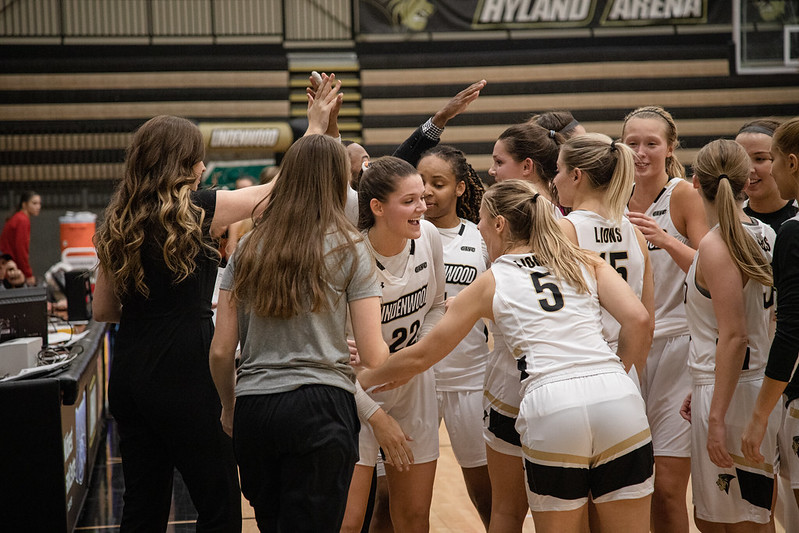 Lindenwood prepares to break out of their huddle during their season opener against Pittsburg State on Nov. 13.

The Lindenwood women’s basketball team enter the GLVC tournament as the fifth seed, ending their regular season with an 18-8 record, including a 9-2 record at home.

Before the season, head coach Katie Falco was determined to build off the success of last season, when the team finished with a program-NCAA record 21 wins and the first-ever at-large bid to the NCAA Tournament.

The Lions started the season 5-0, scoring an average of 76.2 points per game in those five wins. In the opening game with an 83-78 victory against Pittsburg State, Kallie Bildner scored 35 points and grabbed 14 rebounds. This set the tone for Lindenwood’s senior forward, as Bildner finished the season with averages of 22.1 points and 11.8 rebounds per game. Late in the season, Bildner set the Lindenwood career record for points and rebounds, while also breaking her own record for most points in a season. She created the “1000-1000 club” this season, with 1000 career points and rebounds. Bildner was a unanimous selection to the All-GLVC First Team.

After the 5-0 start, the Lions went 2-5 in their next seven games, including losses to Florida Southern, Maryville, and Indianapolis. The defense was unable to consistently stop opposing offenses, particularly in the middle of games. During that seven-game stretch, the Lions allowed their opponents to score at least 80 points three times and 90 points twice.

From Jan. 18 through Feb. 13, the Lions went 6-3, which included high-scoring victories over Missouri-St. Louis, Quincy, and McKendree twice. In a loss to Southern Indiana on Feb. 1, Lindsay Medlen scored her 1000th career point, becoming the 17th Lion to accomplish the feat. Just a week later, Medlen tallied 13 assists, the most by a Lion in a single game, and set the Lindenwood NCAA career assists record.

The Lions finished the season on a dominant five-game winning streak, winning by a combined 89 points during that time. At the season’s end, Bildner was joined by Medlen and Devin Fuhring on the All-GLVC teams, with both being on the second team. Medlen averaged 12.2 points and 5.7 assists per game, while Fuhring finished the season averaging 14.5 points per game, ninth in the GLVC. Fuhring led the team with 39.4% from three.

The Lions open the GLVC Tournament on Mar. 6 against Truman State University, who the Lions beat exactly one month prior, 72-65.