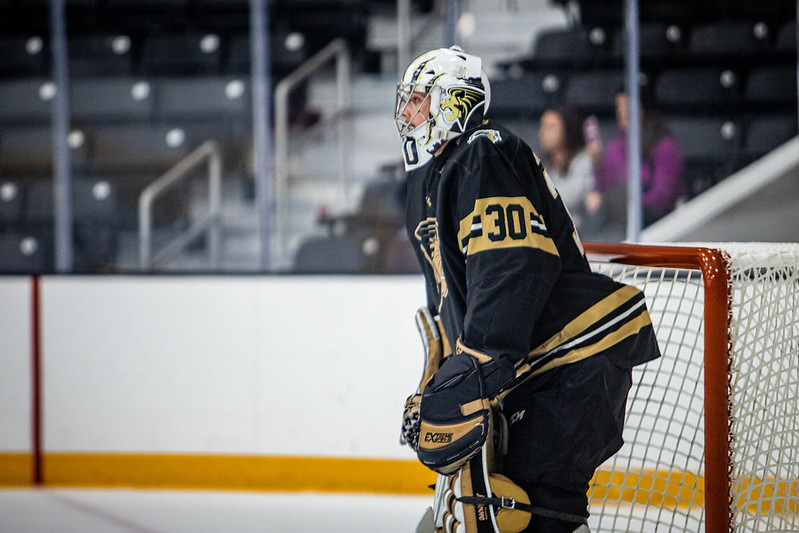 Ending the season on a nine game winning streak, #3 Lindenwood is entering the CSCHL playoffs with a first round bye and plenty of confidence.

“It’s important for us [winning streak before postseason], we’re hitting our stride at the right moment which is crucial heading into the playoffs,” junior goaltender Cooper Seedott said. “We hope to carry this momentum into the playoffs as well as the national tournament.”

Lindenwood finished the regular season with a strong 25-7-0 record overall and a 14-2-0 record in conference games. Their last loss came all of the way back on January 31, when the Oklahoma Sooners came into town to give the Lions a rare home defeat, with the final scoring 3-1.

Besides this loss, it was a successful transition from Wentzville to Maryland Heights at the Centene Community Ice Center for men’s hockey. Lindenwood had a home record of 13-3 at the new arena, but they weren’t just good there. On the road, the Lions were a solid 12-4, and haven’t suffered a loss away from home since November 23 when they fell to Ohio.

“Our success at home and on the road has come from our consistency at practice and in the weight room,” junior forward Zach Mitchell said. “We have a great group of guys that want to win at any cost.”

There was plenty of diversity on the scoring charts for Lindenwood all season, with not just forwards contributing. Three of their top six players in terms of point scored were defensemen, and two of them were top three on the team. Senior defenseman Aapo Nurminen led the Lions with 34 points on the year, and fellow defender Brendan Murphy was third with 25.

“Our forwards were struggling to find the net early, so having the defense come off to a hot start was crucial for our success,” Murphy said. “But now, the forwards have started to really click and have increased their scoring so it seems everything is coming together at the right time.”

Vegard Faret, a newcomer from Lindenwood-Belleville, paced the team in goals with 13 this season. It wasn’t just Faret who found the back-of-the-net often for Lindenwood, as the Lions had seven different players all score at least 10 goals. Murphy and Alex Kalau were tied for second on the team with 12 goals each. Lindenwood’s leader in assists was Nurminen, who had 24 to pace the team.

Seedott enjoyed another efficient season in net for the Lions, playing in 28 of a possible 32 games. Seedott finished with a record of 21-7-0, tallying a save percentage of .942 and a goals against average of 1.26. He also had six shutouts during the season. Stephen Friedland was the backup, who went a perfect 4-0 with just six goals allowed.

“We have tremendous players on our team that help me get better every day,” Seedott said. “Our defensive core is great this year, which makes the game so much easier for me.”

With the regular season now finished, the Lions will begin their postseason run, consisting of the conference and national tournaments. Last year, Lindenwood made it all of the way to the semifinals of the national tournament but fell unexpectedly to Minot State. Despite the difficult loss from a year ago, the team has moved on and is using it to fuel their playoff hopes.

“I can see it [loss] motivating the squad for our playoff run because we don’t want the same result we had last year in the national tournament,” Mitchell said. “We are motivated by our talent and work ethic this year and always stick to our team motto, ‘the cost of we.’”

The road to redemption starts on Saturday, as Lindenwood, after getting a first round bye, will take on either Robert Morris or Iowa State in the second round of the CSCHL playoffs. The championship game is on Sunday at 1 p.m. in Urbana, Illinois at the Illinois Ice Arena. If the Lions can make it that far, they’ll take on either Illinois or Ohio.

The national tournament runs from March 19 through March 24, with the host city being Frisco, Texas in the Comerica Center. Lindenwood feels ready for what the postseason has in store for them.

“We are more confident than we’ve ever been and we have unfinished business to take care of going into the playoffs,” Mitchell said.

Lindenwood has gone through many ups-and-downs throughout the season, even if the record doesn’t show it, but the Lions have still been able to respond well to the lows by using them to help become the team they are today.

“We have faced a ton of adversity this year in terms of injuries, eligibility, and inconsistent play,” Murphy said. “Guys have started to identify and solidify their roles and where they fit in the lineup. I believe this is the biggest component in becoming a true well structured team and understanding what it takes to win.”