Two student apartment buildings may be finished next year 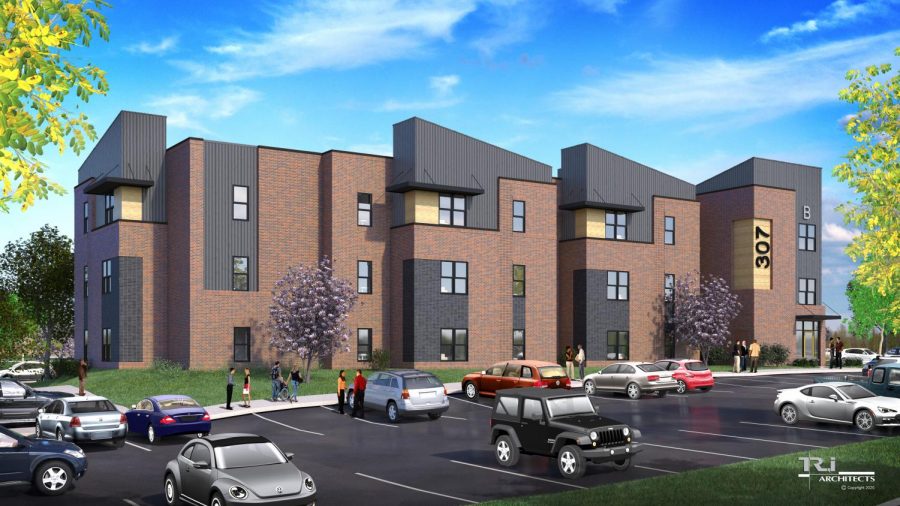 An elevation rendering of one of the proposed student apartment buildings.
Image from Associate Vice President of Operations Tim Crutchley.

Lindenwood University presented plans for new student housing at the St. Charles City Council meeting Tuesday, because the city will have to rezone properties for the project.

According to the plans, the new apartment complex will contain 16 buildings in the Linden Terrace housing area along Droste Road behind the president’s house and Lou Brock Sports Complex.

Lindenwood’s associate vice president of Operations, Tim Crutchley, said the plans are still conceptual, and the president and the Board of Trustees have not yet given approval to start construction.

Rich Musler, civil engineer for Premier Design Group, spoke about the plans on behalf of Lindenwood in the meeting.

Musler said the housing will be built in phases.  The first phase of the project, the construction of the first two buildings, is set to start in June and take 10 months to complete.

To build the first two buildings, seven existing student houses on Karen Street will be demolished.

Then, construction will move to the next three buildings in the summer of 2021.  Musler told Lindenlink the entire project is estimated to take four years.

Use the slider to see plans of the Linden Terrace area after the first phase of buildings go up (left) and the completed project (right). These plans are still conceptual, and construction has not officially been confirmed. This slider may not work on mobile.

The complex will reach from what is currently Charbo Street to Lindenwood Lane.  All the public streets except Lindenwood Lane will become part of Lindenwood University.  People will still be able to drive into campus from Droste through Patma Street.

When it is complete, the housing area is planned to contain a 6,500 square foot student center, recreation area, and 288 apartments.  There will be a mix of two- and three-bedroom units to accommodate over 750 students. The apartments will contain a kitchen, and each bedroom will have its own private bathroom.

The buildings are part of a wide-ranging project involving new construction and renovations on campus and plans to draw in more students.  University President John Porter has said more housing would be needed if enrollment grows, which he plans to make happen.

Though there are some homes not currently owned by Lindenwood in student housing, the University owns all the houses which will be replaced by the new apartments.

The next step towards the housing project is the rezoning of 17 houses in Linden Terrace. The city council introduced a bill to do this on Tuesday, and it will be up for a vote March 17.

The Linden Terrace neighborhood was platted in 1959, and Lindenwood later bought the homes to house students.