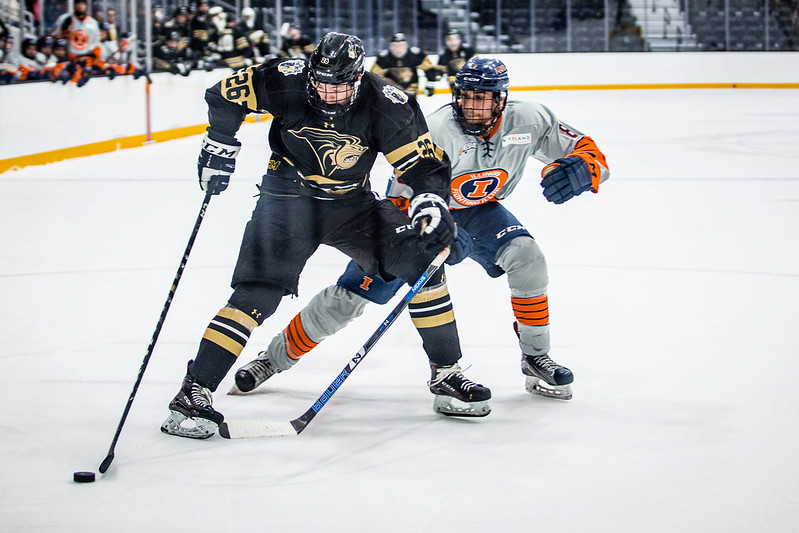 March is here, which means it’s time for the playoffs for various sports across Lindenwood, with conference tournaments now taking place.

Women’s basketball and ice hockey, and the men’s ice hockey teams all competed in their postseason tournaments over the past week with their regular seasons now concluded. Also in action this week were both baseball and softball, who continued their strong starts to the season in the first week of the new month.

Find out how Lindenwood fared this past week in the latest edition of the “Lions Weekly Roundup.”

It was an exciting weekend for No. 11 Lindenwood, who opened up conference play at home against the Southwest Baptist Bearcats. Both games in the doubleheader on Saturday ended with Lions walk-off wins, both ending 3-2. The first game went 11 innings, with Johnny Herrman scoring the winning run off of a Logan Rezash single.

Bryce Beckmann got on in the ninth inning of the second game and after getting all of the way around the bases, he scored after Beau Collier hit a sacrifice fly to win the game. Lindenwood earned its fourth sweep of the season on Sunday, winning by a final score of 9-1 over the Bearcats.

Now winners of 14 consecutive games, the Lions will host Lewis for a three-game set next weekend.

In their first ever GLVC tournament, the Lions went to Edwardsville, Illinois, as the fifth seed out of a possible eight. Fourth seeded Truman State was up first on Friday, and despite being the lower seed, Lindenwood came out with a dominant 20-point victory. The Lions shot around 53% from the field, and outscored the Bulldogs 23-12 in the fourth quarter.

The No. 1 and undefeated Drury Panthers were up next on Saturday in the semifinals. This time around, there was no upset bid from Lindenwood, falling by a final score of 89-67. The Panthers scored 31 points in the first quarter, putting the Lions in a hole they couldn’t get out of early on.

Lindenwood now awaits Sunday night’s NCAA tournament selection show to see if they’ll be playing any further in the 2019-20 season.

The gymnastics team hosted Air Force and Southeast Missouri State on Friday, which turned out to be a successful night for Lindenwood. The Lions finished in first with a score of 195.325, while SEMO was in second with a 194.500. Air Force came in third, tallying 193.175 on the day.

Just one more competition remains before the postseason takes place for Lindenwood, as they’re at home next Friday to take on Illinois State on Senior Night.

Back in action for the first time since October, men’s golf was down in Las Vegas, Nevada for the Las Vegas Desert Classic. Lindenwood finished in 13th out of 20 teams in the competition that went from March 1-3. Arkansas Tech came in first, with an 887. The Lions had a 917 across the three rounds.

Joe MacNeil paced the Lions individually, shooting nine over par and finished tied for 22nd. Other golfers who had solid performances were Gonzalo Gracia (+14), Alvaro Puchades (+16), and Caleb Picker (+16).

Men’s golf will compete in the Saginaw Valley State Spring Invitational next weekend in Lexington, Kentucky.

As the number one seed in their conference (CSCHL) tournament, Lindenwood got to rest with a bye in the first round. This rest proved to be much-needed as on Saturday, the Lions played a 5OT marathon against fourth-seeded Iowa State in the semifinals, the longest game in program history. Vegard Faret scored the game-winner to send the Lions the championship game.

On Sunday, Lindenwood took on the hosts and third-seeded Illinois. Aapo Nurminen scored the game’s first goal in the first period, and the Lions never looked back after that. Lindenwood went on to shut out Illinois 5-0, and win its third straight CSCHL Conference Tournament.

Next up is the national tournament, starting on Friday, March 20 for Lindenwood. As the No. 3 seed, the Lions will get yet another first round bye and take on the winner of No. 14 Drexel and No. 19 Indiana University of Pennsylvania in the second round.

The season has officially come to an end for women’s ice hockey, as they fell to Syracuse 4-0 in the first round of the CHA tournament.

In a game played on Thursday in Buffalo, New York, Lindenwood surrendered at least one goal in every period. Annika Asplundh made 29 saves in the loss, compiling a save percentage of around .906. The Lions outshot Syracuse 12-8 in the third and final period.

No. 14 Lindenwood played a pair of games at home and on the road over the week. First at Hunter Stadium on Tuesday, the Lions defeated Lynn University 16-8. Three players all scored hat-tricks, with Carter Collins scoring four goals, and Leonard Jones and Jake Campbell scoring three each.

The Lions then opened up conference play on Sunday, making the short trip to Maryville for a contest with the Saints. Lindenwood led 9-3 after the first half, and continued its efficient day in the second half, outscoring the Saints 9-6.

Lindenwood is now a perfect 5-0 to start the season, and are 3-0 away from home.

The women’s lacrosse team suffered its first loss of the season on Wednesday, as the Lions lost 16-13 in a nail-biter against No. 16 Grand Valley State at home. The loss marks Lindenwood’s first since the NCAA tournament last year against Colorado Mesa on May 10, 2019.

No. 3 Lindenwood responded in a big way after the defeat, earning two one-sided victories in the remainder of the week. They first cruised past Findlay on Friday 21-5, before holding Shepherd University to just two goals on Sunday.

At 7-1, the Lions will travel out to No. 12 East Stroudsburg on Tuesday and then Walsh on Thursday.

Playing all of their games for the week on Monday and Tuesday, Lindenwood went a perfect 4-0 with sweeps over Lincoln and Saint Louis College of Pharmacy. In the two wins against Lincoln on Monday, the Lions were explosive on offense, scoring a total of 17 runs on the day.

Pitching stole the show on Tuesday, and more specifically freshman pitcher Amanda Weyh. In the first of the two games, Weyh threw what is believed to be Lindenwood’s first perfect game of the NCAA era. She went 5.0 innings and threw nine strikeouts in the historic performance.

With just four losses on the season through their first 15 games, Lindenwood will head to Memphis, Tennessee to take on Christian Brothers and Union on Tuesday and Wednesday before coming back home to host Illinois-Springfield and Lewis next weekend in GLVC play.

Over the past seven days, the men and women’s tennis teams competed in three separate matches in a busy week for Lindenwood. Lake Superior State was first up for the Lions on Tuesday in Creve Coeur, MO, with the men falling 6-1 and the women losing by a score of 4-3.

Both teams rebounded with wins on Friday at William Jewell, as the men won 6-1 and the women swept the opposition 7-0. On Saturday, it was a different story. At Newman University in Wichita, Kansas, the Lions fell short both on the men and women’s sides.

Lindenwood will have a week off, before having three more days of matches the following week.

The Lions made the long trip all of the way to the West Coast, where they played two games in California. First on Friday, Lindenwood had the challenge of playing at No. 4 Long Beach State. After falling in the opening set 25-20, the Lions went on to drop the next two as well, losing 3-0.

It was a similar story on Saturday, as Lindenwood took on Southern California. The Lions had their backs against the wall heading into the third set down 2-0, but got a win on the board with a 25-14 victory. They couldn’t turn this into positive momentum, however, falling in the fourth 25-22.

Now 11-8 on the year, Lindenwood has a home-and-home series with Quincy next week in conference play.