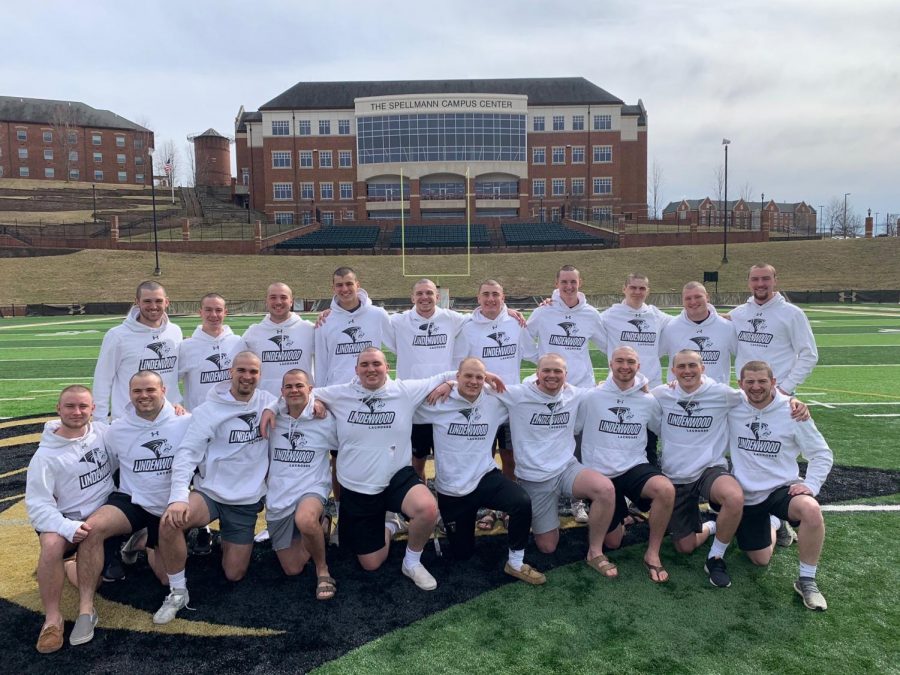 The 20 men's lacrosse players who shaved their heads pose in the middle of Hunter Stadium's football field.

“It [19 others shaving their heads] meant the world to me,” captain Bryan Bevelhimer said. “At first, I didn’t know how quickly guys would jump at the opportunity, because the team loves their hair, but when I explained the cause they all immediately volunteered.”

Bevelhimer organized the team’s participation in this cause that saw nearly half of the Lions roster take part in. The senior said that the group had a simple desire to help out kids who were and are suffering from cancer, as he and other players know someone who is going through this. For Bevelhimer, it was his little brother.

He said he came up with the idea the day after the deadline for it, and after seeing other teams post about the cause on their social media accounts.

“I saw a few other teams on social media participating and it made us want to jump in,” Bevelhimer said. “Thankfully, Lacrosse for Life trusted us to shave our heads and get the picture in after the deadline.”

Lacrosse for Life, an organization that brings attention to matters such as cancer and mental health, raised a reported $2.1 million in their “Greater Than Lacrosse” head-shaving drive that ran across the country. Bevelhimer says that this shows what the lacrosse community is all about.

“I think this just goes to show that we really do care about helping out the community and those around us,” Bevelhimer said, “and in this case, helping out young kids during the toughest part of their lives.”

After practice one day, Bevelhimer asked his teammates if they would like to participate in the drive. The next day, 20 players had committed to shaving their heads for the cause. While it also helped improve the team’s chemistry, the veteran says that the main reason behind so many players doing this was because of the chemistry that had already been built.

“In my four years at Lindenwood, I haven’t played on a team as tight-knit as this one,” Bevelhimer said. “This was an awesome bonding experience between the guys, but the chemistry has always been strong.”

As a team, the 20 athletes raised around $20,000 for Pediatric Cancer research. Bevelhimer says that this proves how tightly knit the 2020 men’s lacrosse team truly is.

“It just goes to show that we are the closest we’ve ever been and that we’ll do anything to help those who need it,” Bevelhimer said. “This is my last year on the team, but I’d expect that more and more of the guys will participate in the years and seasons to come.”