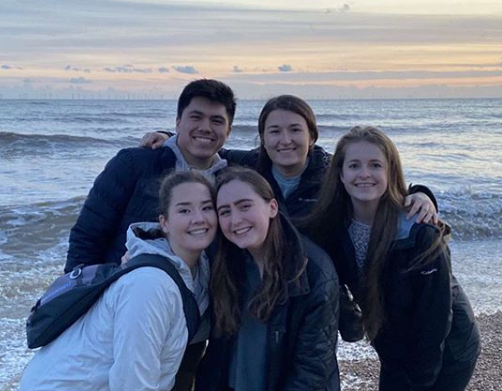 Emily Bax (second from right) with (from left) Nick Garcia, Kira Reed, Cassi Morton, and Lindsay Danchersen before their study abroad trip was cancelled because of COVID-19.
Photo from Emily Bax.

One student studying in Spain, Claire Hein-Salvi, found out around 5 a.m. on March 12 that her program had to be canceled because of COVID-19.  By March 15, she began her journey back home.

She said that a week earlier, everything was normal.  During her last week there, in which U.S President Donald Trump restricted travel from Europe, the pandemic caused an abrupt, “heartbreaking” change.  She saw empty streets, everyone wearing masks, and workers in hazmat suits disinfecting the airports.

“Within five days, the sentiment and the feeling in Spain completely changed, because it’s a culture that’s very touchy and very warm and everyone’s always talking outside and in cafes,” Hein-Salvi said. “Streetlife there is very prominent, and then to see it go to pretty much what Lindenwood looks like at night […] it was very eerie for sure.”

Before she left, Spain instituted a lockdown. She said the military patrolled the streets, and people outside their homes for non-essential reasons could be fined up to 5,000 euros or sentenced to jail time.

“The longer I stayed there, the more I realized I had to leave because of how bad it was getting there,” Hein-Salvi said.

As of April 7, Spain is the country with the second-highest number of reported coronavirus cases.

Previously, Lindenwood had canceled study abroad in Italy, China, Japan, and South Korea, but as the pandemic got worse, all study abroad students had to come home and complete their courses by registering for late-start classes.  Students traveling from the most severely affected countries were required to quarantine off campus for 14 days.

Another student, Emily Bax, was studying in Brighton, England.  At first, the travel restrictions didn’t apply to the United Kingdom, which left the European Union in January, so Bax said it didn’t worry her at first.

But after the U.S. extended the restrictions to the U.K., Baxter said her mom, dad and uncle began calling her nonstop.

Lindenwood had already canceled Bax’s study abroad trip before the travel restrictions.  Shortly after, USAC, the program through which she was able to get British health insurance while studying abroad, was cancelled too.

The pandemic was not as severe in Britain as it was in other parts of Europe, with only a few hundred cases, and Bax said Brighton was not one of the hotspots.  Since then, the country has developed over 50,000 cases.

Bax said she made close friends in Brighton, who she was sad to have to leave.

“You become really close with these people really, really fast, and so having to leave them was really, really sad,” she said. “There was literally a day when all of us got together and we just cried.”

On top of this, Bax and her roommate caught strep throat in Britain.  She was worried because USAC told her U.S. customs would conduct enhanced medical screenings of people coming in from international flights, and pull aside passengers with COVID-19 symptoms.  But after she landed, the only thing customs asked her was what was in her luggage.

She remembered a time when she had a coughing attack in a stairwell at school in Barcelona.  Later, she was talking to a student who remembered seeing her.

“He was like ‘Yeah, I remember that because we just had finished talking about how we’re all going to be fine and how none of us are going to get coronavirus, and then we turn and see you dying on the stairs’,” Hein-Salvi said.

Both students are now safe at home, Bax in Illinois, and Hein-Salvi in Vancouver, British Columbia.

Hein-Salvi said there is little traffic on the streets in Vancouver, and most shops are closing as the virus continues to spread.

She also has family in Italy, which was once the epicenter of the pandemic outside of China.  She said her family isn’t able to work because of the lockdown. To leave their houses, Italians must have a paper saying why they are leaving.

In spite of this, she said neighbors will sing together on their balconies, and at 10 p.m. each night, Italians stand outside to clap for healthcare workers.

Hein-Salvi said what her and her family’s experience with COVID-19 taught her is that everyone needs to take the disease seriously and take measures to prevent it.

“In the beginning I thought it was stupid and whatever, and young people aren’t going to get symptoms, and we’re fine, but after seeing that happen in Spain, my perspective and my mind definitely changed,” she said. “I was thinking very selfishly […] I wasn’t thinking about people like my parents that could get infected.”