‘A lot of small businesses will not reopen,’ local restaurants reevaluate business in the wake of COVID-19 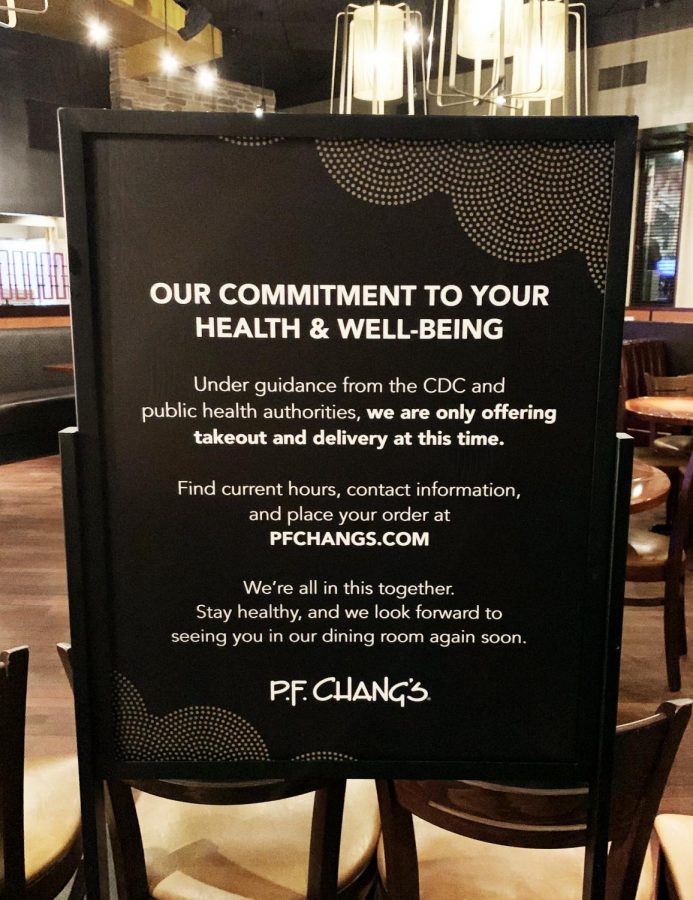 A sign at P.F. Chang’s informing guests of new restrictions to dining options as a result of the coronavirus pandemic.

As the total duration of the COVID-19 pandemic is unknown, local restaurants are forced to reassess their business operations to adapt to this unprecedented time.

Effective on March 19, 2020, the initiative eliminated in-house dining in restaurants and bars entirely and limited restaurants to only offer take-out, curbside and delivery orders.

For Quintessential Dining and Nightlife, the new transition was not feasible enough to manage. The St. Charles restaurant, event space, and nightclub decided to shut down all operations, including take-out.

“We’re closed,” Eric Sohn, the managing partner at Quintessential, said. “It’s just not worth it.”

As many restaurants have partnered with delivery courier services to have meals delivered to a customer’s door, Sohn said the cost to remain open for pickup and delivery orders are still expensive.

Sohn said restaurants also have to figure in the cost of essential materials like to-go boxes, to-go silverware and condiments packets that also decrease profits.

“You can’t run a business on delivery services alone,” Sohn said. “It’s not a good business decision to rely solely on takeout orders.”

Quintessential Dining and Nightlife employs around 50 employees and Sohn said quite a few of them are Lindenwood students. Sohn said he believes people are going to “get desperate” because of the lack of work while managing their financial responsibilities. The uncertainty of not knowing when restaurants will be able to reopen back to normal is what Sohn said is scary.

“I foresee a lot of smaller restaurants not being able to recover from this,” Sohn said. “Some of the bigger ones, like us, I think that we should be fine unless this goes on for months and months. If this goes on until July or August, that could be a different story. I don’t know how long to expect this.”

While restaurants across the nation are struggling to make ends meet during this time, Sohn said the federal government should be doing more to help restaurants survive in the wake of this pandemic. Sohn suggests that a temporary elimination of taxes like payroll, tourism and real estate could put restaurants more at ease.

Business associations, like the National Restaurant Association, are requesting financial relief efforts to be enacted by the federal government. This includes a $145 billion proposal for Congress to provide aid like unemployment assistance, tax relief, and rent and mortgage deferment. It’s estimated that up to seven million jobs and a $225 billion revenue loss could result from if the coronavirus pandemic lasts for up to three months.

Although Sohn would like Quintessential to be back open as soon as possible, he said this public health crisis must be defeated first.

“Hopefully our government can decide to get this pandemic under control, so we can open back up to business as usual,” Sohn said. “I would like to get open as soon as possible, but we need this pandemic to stop.”

According to its founder and owner, Chris Schulte, the new business structure has “worked well” so far. But after April 8, Picasso’s will officially close all physical locations until further notice.

“We’ve had to be very nimble and really change our business model,” Schulte said. “Now we’re getting to a point where we are concerned about safety. As an owner, I have to look out for my people and their families.”

Schulte said he believes this is the “moral thing to do right now” and that it’s important to take action early before things start to worsen.

“There’s a sense of tension and nervousness [amongst the staff],” Schulte said. “When I announced yesterday that we’re finally going to be shutting down for a while, there was some relief.”

Despite the lack of work, Schulte said that his staff will be taken care of for at least the next 8 weeks.

“The government is offering a program called the Paycheck Protection Program,” Schulte said. “As long as I keep my staff on the payroll, not lay them off and continue to pay them, the government will subsidize that money back to me. So it’s a way to keep people from going to unemployment.”

Although the 17-year-old coffee shop will be shutting its doors indefinitely, Schulte said customers can order their in-house made coffee roasts online to be shipped to their homes.

In addition, Picasso’s is pledging $2 to charity to every bag of coffee that is sold. These charities include a local food pantry, 5 Acres Animal Shelter and the Crisis Nursery, which is a “short-term safe haven for children facing illness, homelessness and domestic violence,” according to its website.

“In all this craziness, we just don’t want those important charities to be forgotten,” Schulte said.

Schulte said he hopes that his business will be “smarter and stronger” after the COVID-19 pandemic is over, but he stresses the importance of supporting local businesses during this time.

“A lot of small businesses will not reopen,” Schulte said. “I just hope when people make their buying decisions, they take into account their friends, neighbors and local businesses in their community. Support them through good times and bad.”

The state of Missouri is now under a stay-at-home order that took effect on April 6, 2020. The measure is currently slated to end on April 24, 2020.