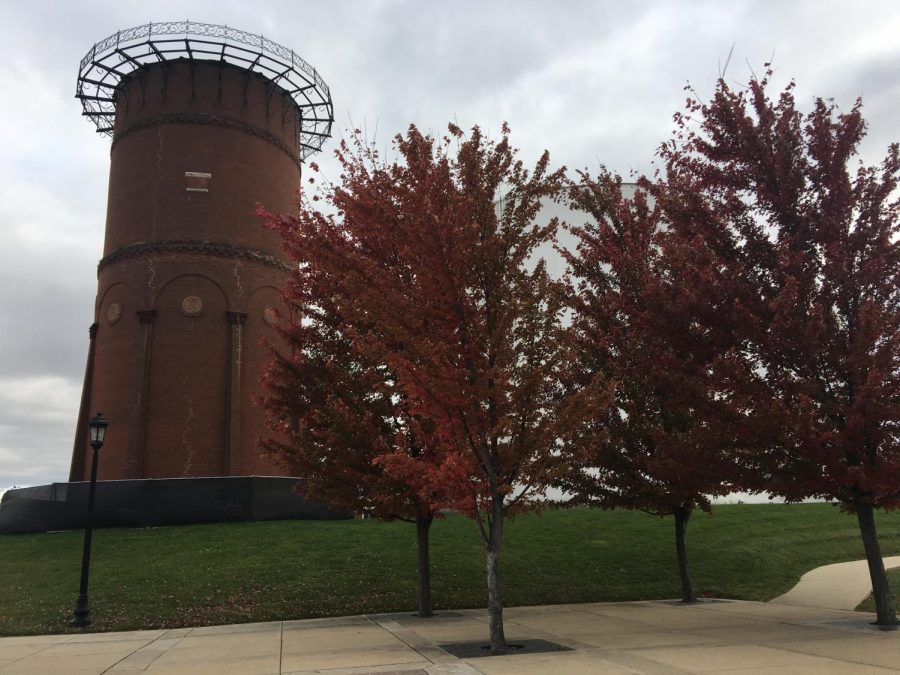 The over 130-year-old water tower on campus is set to be demolished because of its decaying condition.
File photo by Kat Owens.

Workers began removing roof tiles and debris from the upper level of the Lindenwood water tower on Friday.

Facebook posts advocating against plans to demolish the water tower caught the attention of St. Charles residents, Lindenwood alumni, and local media. Lindenwood then released a statement on May 13.

The City of St. Charles approved a demolition request for the Lindenwood Water Tower on May 7 after an engineer hired by Lindenwood deemed it unsafe.

According to the report, “due to the large physical dimensions of the water tower and its proximity to the Lindenwood University parking lots, and the adjacent city water storage tanks, it is my opinion that the tower’s current condition represents a potential safety hazard.”

Kildea added that he did not recommend rehabilitation or reconstruction as it would not be “economically feasible due to the extent of the deterioration observed. I recommend hiring a demolition contractor to completely demolish the existing water tower.”

Because the water tower is a St. Charles historic landmark, special permission from the Landmarks Board is normally required before it can be torn down. However, if an engineer determines the structure to be a public hazard, such permission is not needed.

In November 2019, Kildea submitted the report to Lindenwood which was then provided to the mayor of St. Charles, Dan Borgmeyer.

According to the statement Lindenwood released, “in the tower’s current condition, there are concerns that bricks would continue to fall from it and potentially harm students, faculty, staff, and guests on campus or the entire tower may collapse.”

Because of the deterioration, Lindenwood put a fence around it to stop students from walking too close to it and has asked to demolish it before.

An environmental analysis was also completed by the Farmer Environmental Services, as required by the State Department of Natural Resources.

Lindenwood plans to construct a monument where the water tower is located, and keep materials from the original structure.

“This monument will remain as a reminder of the water tower’s historical significance to the St. Charles community and Lindenwood University,” the statement read.

Along with the monument, there will be a future public dedication and a plaque to commemorate its importance.

Lindenwood will keep 100 bricks, and members of the community can obtain them for purchase.

“No one wants to say goodbye to this historic structure, but we are at an unfortunate crossroads where we must decide between preserving a piece of the past and safeguarding the physical wellbeing of our future. It’s a sad time, especially for those who attended Lindenwood and fondly recall the tower as part of their experience,” Lindenwood President John Porter said in the statement.

Borgmeyer said in a city council meeting on May 12 that the water tower is in “dire shape.”

Borgmeyer proposed rehabilitating the landmark, but the costs would be over $1 million.  Another proposal discussed in the meeting was moving the top section of the tower near the historical district.

The water tower, built in 1883, was bought by Lindenwood in 1971 for one dollar to avoid demolition.

This story was updated on May 15, 2020, at 8:20 p.m. with information on the demolition progress and the water tower inspection report.