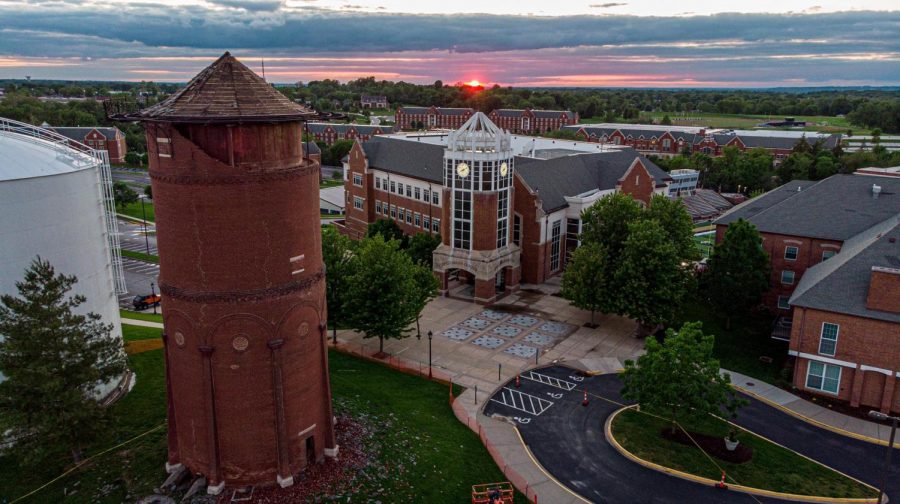 Demolition of the historic water tower began on May 13, and was put to a halt by a judge two days later. Photo provided by Drone Pro STL

A circuit court judge has granted a Lindenwood alumnus time to hire an engineer to boost his argument that the university should not be allowed to demolish an historic water tower on the St. Charles campus.

Also at the hearing, Steimel took under advisement a request by Lindenwood to dissolve a temporary restraining order that had been imposed last week after Buddemeyer filed court papers to stop the water tower’s demolition.

“We are pleased with today’s result,” Buddemeyer said in a text message. “We are cautiously optimistic that Honorable Judge Steimel will side with the community and issue a permanent restraining order in order to preserve the historic St. Charles Water Tower. We want to thank supporters, alumni, and students for continuing to stand with us to fight to preserve our cultural heritage.”

Lindenwood did not immediately respond to requests for comment.

The legal battle over the water tower began after the City of St. Charles approved a demolition request by Lindenwood on May 7. The university had presented an engineer’s report that deemed the water tower unsafe due to its deterioration and the possibility of falling bricks injuring students, staff, faculty, and visitors walking by it.

Lindenwood released a statement on May 13 announcing the demolition, which prompted some St. Charles residents and Lindenwood alumni to advocate against the demolition of the water tower on social media.

Workers had already started taking down roof tiles and debris from the upper part of the water tower when Buddemeyer filed his motion on May 15.

Editor’s Note: a previous version of this story stated that the St. Charles City Council approved a demolition request by Lindenwood on May 7. It was approved by the city staff, not council.