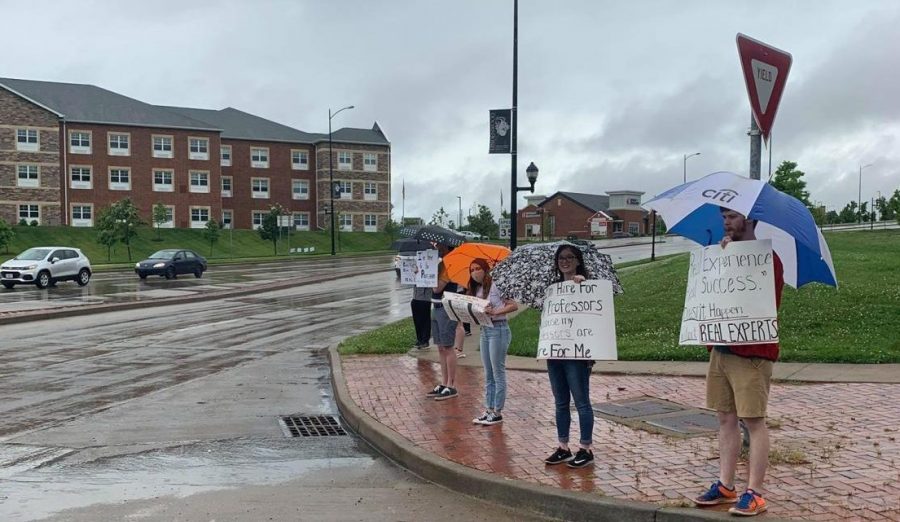 Students and alumni gathered outside of the LARC entrance on May 27 to protest the layoffs of staff and faculty.
Photo courtesy of Trisha Tamblyn.

A rainy day did not stop a mix of 16 students and alumni to gather outside the gates of the Library and Academic Resources Center on May 27 to protest the layoffs of staff and faculty from Lindenwood University.

One of the picket signs read “Real experience, real success, cannot be achieved without real experts.” Twelve faculty and 16 staff positions were terminated last week after financial considerations by the University.

Trisha Tamblyn, a music business student at Lindenwood, came up with the idea of protesting after finding out some of her own professors had been laid off. She created an event on Facebook called “Lions against layoffs,” which then started circulating on the social media platform, reaching to both students and alumni.

She said that even though things might not change, the affected staff and faculty have said they are grateful for students standing up for them.

“People were pulling up with their cars to say thank you and showed support,” Tamblyn said about Wednesday’s protest.

Now, Tamblyn and other students might host more protests in the future if they are able to have more support from the community.

Kirsten Muehlbauer, a recent music business major graduate that attended the protest, said many students are trying to gather the names of the staff and faculty who were affected.

“It’s especially tough for the students returning in the fall and the departments that are going to have to figure out how to fill class spots and all of the responsibilities these professors held,” Muehlbauer wrote on a text message.

Muehlbauer said one of the teachers that got laid off from the music department had a Grammy.

Muehlbauer, who is from St. Peters, plans to be involved in future protests because they “really help show the people of St. Charles and the school that we are taking a stand.”

Like other colleges in the St. Louis area, Lindenwood has been financially impacted by COVID-19. Lindenwood decided to reduce the costs of summer classes, which started a week ago, and froze tuition for the 2020-21 school year.