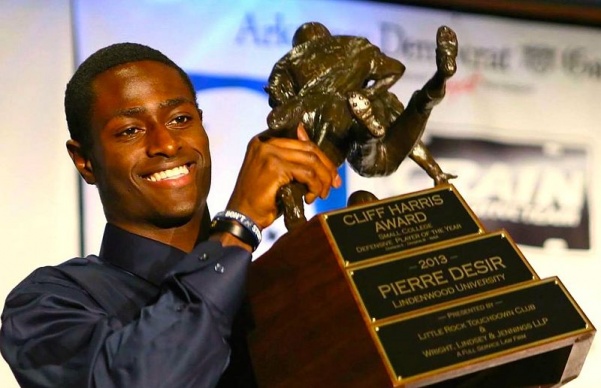 Pierre Desir holds up the Cliff Harris award in 2013. The award is given to the best small school defensive player in the country.
Photo from Wikimedia Commons.

In his first year playing with the New York Jets, Lindenwood alum Pierre Desir has already made an impact on his new team, as he’s tied for the most interceptions in the NFL.

“It’s a great accomplishment, I couldn’t have done it without the support and the play from my team,” Desir said.

Desir went to high school locally at Francis Howell Central, but originally was born in the Haitian Capital.

“My family moved to St. Louis because of the issues in Haiti,” Desir said. “It wasn’t the safest place in the ’90s, and luckily with the help of a church group, my family and some other families were able to leave.”

Desir was a standout in high school, and because of his play, he earned himself a scholarship. Originally committed to Washburn University in Topeka, Kan., Pierre played his first two years for the Ichabods, as he was an all-conference player his freshman year, tallying seven interceptions on the season. He would go onto to finish his 2010 campaign with over 70 tackles and an impressive five picks as a sophomore.

In 2011, he ultimately decided to leave Topeka to be closer to his young children, and Lindenwood was the perfect fit. Desir sat out his first year at Lindenwood, and decided to make his official return to the gridiron in 2012. He had nine interceptions his junior year.

The corner’s efforts began to pay off by the time he was a senior, when he won a piece of hardware called the Cliff Harris Award, which honors the top small school baller in the nation for college football. Desir would finish his collegiate career with 25 interceptions, which puts him on the top 10 list for career interceptions at the Division II level.

Desir would make history the spring after his final season at Lindenwood. He became the first ever-drafted Lion as he was taken with the 127th pick overall in the fourth round of the 2014 NFL Draft.

Pierre’s first destination would be Cleveland, where he spent the first two years of his career. He spent a year in San Diego with the Chargers, and then the young corner packed his bags for Indianapolis. Pierre spent 3 seasons with the Colts, and that’s where he broke out as a corner. 2017 was a special year for the corner, as he would get his first career interception against an all-time great.

“My most memorable pick was my first pick against the Steelers,” Desir said.

His first career pick would come against two-time Super Bowl champion Ben Roethlisberger. Desir would then put up a career year with the Colts in 2019 as he snagged in three interceptions for the defense led by Matt Eberflus as he picked off guys like Deshaun Watson, and the Super Bowl MVP, Patrick Mahomes.

The Colts and Desir unfortunately decided to part ways after last season, and he would once again be on the market. Being one of the best corners on the free agent market, the New York Jets decided to give Desir a shot. The secondary needed some help, along with leadership. With the departure of superstar Jamal Adams, Pierre was the perfect signing for Adam Gase and the Jets.

A challenge for any first year player on any team is adjusting to your new defense, but Desir was granted the chance to play with a defensive coordinator with a strong resumé. The Jets defensive coordinator Gregg Williams is no stranger to St. Louis as he was the Rams’ coordinator in 2012, 2014, & 2015, and he’s even won a Super Bowl. He’s a defensive mastermind, and Desir loves to play for Williams.

“Playing for Coach Williams means playing for a guy who breathes football,” Desir said. “He holds each player to a certain accountability and expects you to play to that. He’s a great coach to be around, and he’s full of energy for the game and his players.”

Despite New York’s tough start to the season, Desir has been one of the shining stars of the Jets. Through four weeks of play, the Lindenwood alum has tallied three picks on the season, which is tied for the most in the entire league. Desir had a career game last week as he tallied two interceptions against the Denver Broncos, one of them being a pick six.

“The pick six was the more memorable pick for me, because it was my first in the NFL,” Desir said.

One advantage for all defenses in pro football this year is the fact that there is virtually no crowd noise at away games. Despite this, the corner believes that there is not a lot different about having fans at the game.

“I’d say it’s about the same,” Desir said. “The crowd noise gives the home team the advantage, but it doesn’t change what the offense does much.”

Desir and the Jets will face off against the Arizona Cardinals this week, as he will look to continue his strong start to the year and help New York get their first win of the season in East Rutherford.