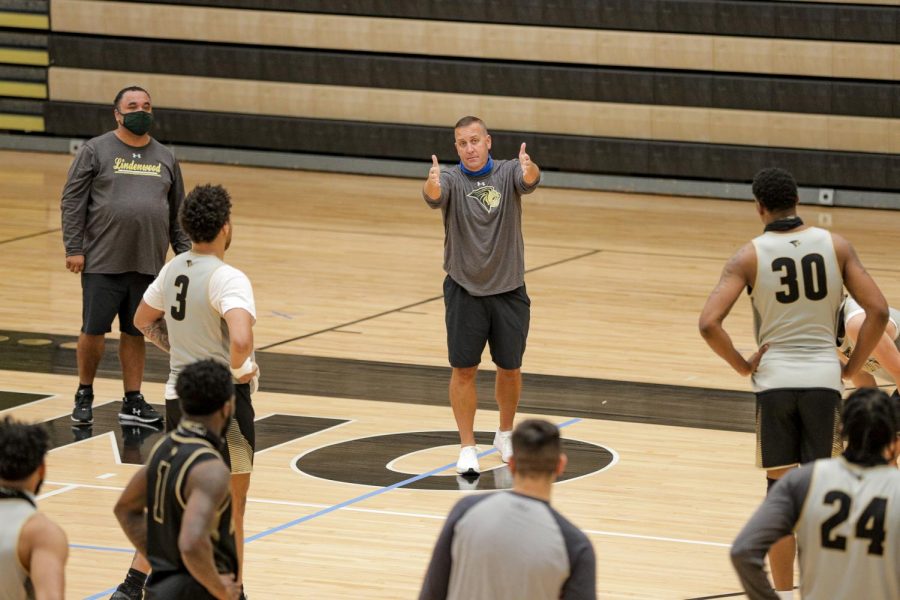 Head coach Kyle Gerdeman gives instructions to his team during a practice on October 16 in Hyland Arena.

“First off, I’m just excited to even have a season and to be starting in November. Can’t complain at all,” senior guard TJ Crockett said as the men’s basketball team finally has clarity on their upcoming season.

The Lions will tip-off their season in approximately five weeks when they play the Missouri S&T Miners at Lindenwood. The season will be 22 games, with all being in-conference play. The GLVC Tournament will be held from March 4-7.

Playing an all-conference schedule may give a team a confidence boost because they know the styles of each of the teams they play, but Crockett doesn’t think that way.

“I never feel to have an advantage over any team because you don’t know what they are doing,” Crockett said. “But we are getting the chance to put in work, and build on gaining a stronger chemistry on the court.”

“Well I’m not sure there is an advantage to playing only conference teams, but I think right away you realize every game is this season,” Gerdeman said.

He then went on to emphasize practice.

“So maybe your focus is leaned a little more towards practice, your intensity is there every day because from the first game on, you are competing for the conference championship,” Gerdeman said.

With a year like this one, college athletes are left with unanswered questions, and especially curiosity. It can be hard to focus solely on your team, and the game of basketball when you have a pandemic going on in the world around you. One thing that is essential in order to having a winning team, is having plenty of preparation.

“I think early in the semester/pre-season we saw some guidelines and restrictions put in place to allow our student-athletes to work out, maintain social distance, stay safe, and avoid a possible COVID spread,” Gerdeman said. “We spent a lot of time in small groups, or doing individual workouts with a big focus on skill improvement and conditioning.”

One of the bigger challenges players have faced through this period is having to wear masks even when practicing.

“The most different and actually difficult thing is trying to wear a mask during practice and testing,” Crockett said.

“At any given moment you can catch the virus and never know, so that’s two weeks out, and that’s not good if you have to miss two weeks of playing or practicing.”