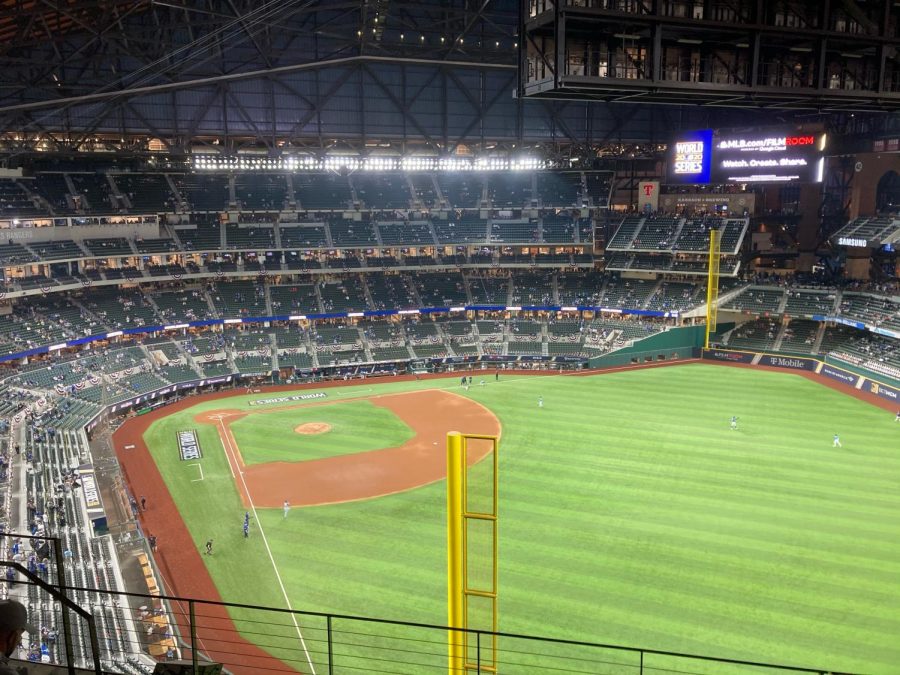 Globe Life Field in Arlington, Texas ahead of a World Series game between the Tampa Bay Rays and Los Angeles Dodgers.

In 2019, the average face value of a single ticket to the World Series cost around $1,329. senior Daniel Kennebeck came across World Series tickets for $70 on MLB.com.

“My friend and I saw the tickets on sale directly from the MLB and they were only $70 per ticket. An insane deal for a World Series,” Kennebeck said.

As all of the World Series games are usually held at the ballparks of the team that are participating in the series, this year’s match-up is being held at a neutral site to minimize travel.

The series is being held at the brand new Globe Life Ballpark in Arlington, Texas, which is the baseball home of the Texas Rangers of the American League. 11,000 fans filled the stadium, which was the smallest live crowd in a World Series since 1909, over 100 years ago.

“I think it will be weird to see a crowd fully energized, but the stadium be over half empty,” Kennebeck said.

Kennebeck and two of his closer friends were in attendance on Sunday night for Game 5 of the series.

The senior wanted to see if his luck continued, looking for a bargain for Game 4 as well, as he hoped to attend.

“We attempted to buy tickets for Game 4 as well, but they were sold out before we could buy them,” Kennebeck said.

In a series that consists of teams from Los Angeles and Tampa Bay, Kennebeck didn’t hesitate in choosing who to root for.

“It will also be different because I don’t have too much of a vested interest in either team,” Kennebeck said. “The Rays closing pitcher went to my high school, and I hate the Dodgers, so I decided to root for Tampa Bay.”

The Dodgers have a 3-2 lead in the series after Sunday night, with a chance to clinch their first World Series win since 1988.