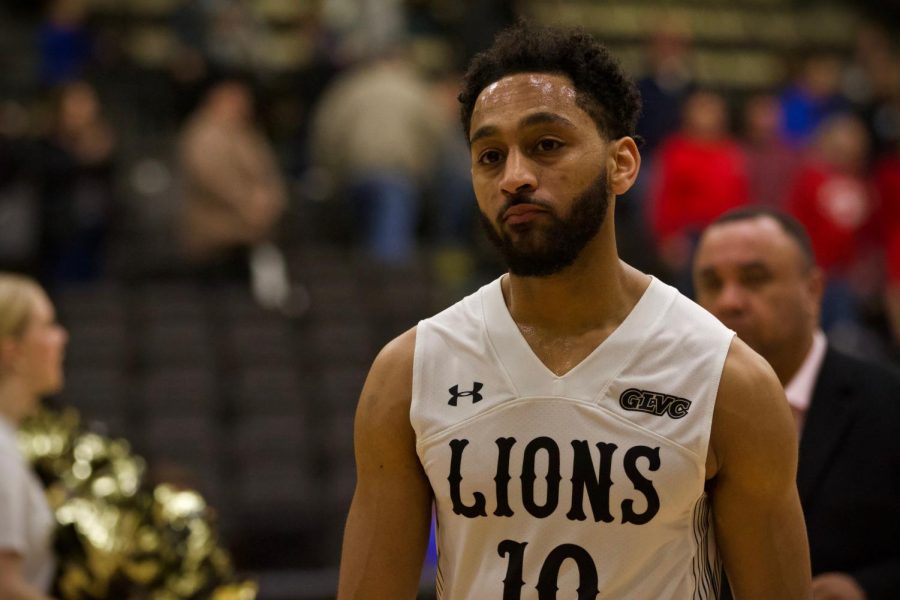 Vijay Blackmon walks off court after losing to the Southern Indiana Eagles by nine points on Feb. 1.

With the men’s basketball season just over two weeks away, one of the players expected to lead the team is starting guard Vijay Blackmon.

Blackmon isn’t the first in his family to play ball at the next level, as he comes from a family that is familiar with the hardwood. His older brother James Blackmon Jr., 25, played the point with the Philadelphia 76ers for a season, and is now playing abroad in Turkey, where the 6-foot-4 guard is putting up around 22.0 points per game in Istanbul.

Vijay’s father, James Blackmon Sr., was also a standout basketball player. He was a USA Today All-American and McDonalds All-American and played four seasons under Eddie Sutton at the University of Kentucky. Blackmon Sr. would go on to score 866 career points for the Wildcats, and would play in 128 different games in Rupp Arena. He was drafted 94th overall in the ’87 draft by the then New Jersey Nets, but ultimately went on to become a head coach.

Blackmon Sr. would coach Vijay at Marion High, and for his freshman year at Bishop Luers High in Fort Wayne, Ind.

Vijay would go onto to thrive during his high school career. Coming out of high school, Blackmon was a three star recruit with some major interest from Division I programs, such as Purdue, Notre Dame, and basketball powerhouse UCLA. He was even a top 20 player in his state coming out of his senior season in 2015. He ultimately decided that it would be best to go back his hometown of Fort Wayne for college.

Blackmon would attend Saint Francis University in Indiana for his freshman year, where he would average 9.2 points, 2.0 rebounds, and 1.1 assists in 22 outings. Vijay was lucky enough to draw attention from a major Division I program, and would follow the footsteps of his brother to attend the University of Indiana.

“It was a great experience. I got a chance to compete everyday with very good players, and I learned a lot from Cliff Marshall, their strength and conditioning coach,” Blackmon said.

Marshall has trained more than 10,000 athletes with the likes of NFL superstars A.J. Green, Luke Kuechly, and Geno Atkins. He has previously worked for the likes of the University of Dayton, Xaiver, and Louisville.

Due to transfer requirements, Vijay had to sit out his first season at Indiana, then go on to play one full year with the Hoosiers. After graduating in three years in Bloomington, Vijay got an unexpected invitation to continue his basketball career. That invitation came from Lindenwood University.

Vijay had never heard of the school, but they would give him the opportunity to earn his master’s degree in health science.

“I am getting my master’s degree while being on a team that I feel can compete for a conference title,” Blackmon said.

Blackmon will be competing in his final year of eligibility, with intentions to graduate next spring.