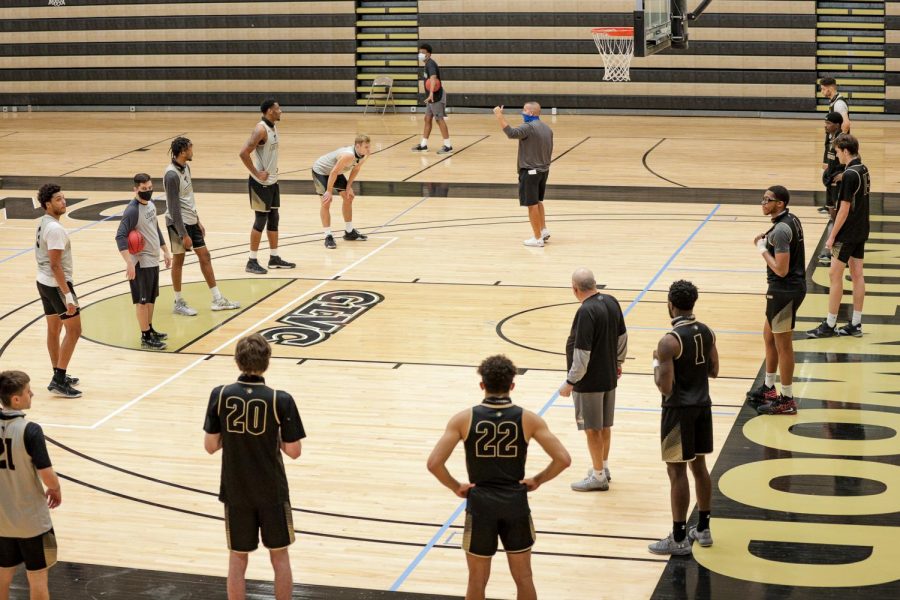 Head coach Kyle Gerdeman talks with the team during a preseason practice on Oct. 16, 2020 in Hyland Arena.

Heading into their second year with Kyle Gerdeman as head coach, men’s basketball will welcome two Division I transfers for the 2020-21 season.

Seniors Romelo Burrell and Brandon Suggs are spending their final year of eligibility playing under Gerdeman at Lindenwood. Burrell comes from Mt. Pleasant, Mich. as he played at Central Michigan, and Suggs is coming from Kansas City as he played for the Roos at UMKC.

Dating back to the 2018-19 season for Suggs at UMKC, he saw action in 31 matchups and saw four starts as well, averaging 2.6 points a game. Burrell saw action in every single one of his games last year, as he averaged 2.5 in his junior campaign. Along with their experience at one of the highest levels, Burrell and Suggs bring athleticism, scoring ability, and size to a team looking to make a deep run and compete for a GLVC title this season.

Q: What made you guys transfer to Lindenwood?

Burrell: “Since Coach Gerdeman was at Central Michigan during my first year, we established a solid relationship. He was the coach that always made sure that I was good on and off the court. So I knew that I could trust him when deciding where to spend my senior season.”

Suggs: “I transferred to Lindenwood mainly because I had already known and had built a relationship with Coach Corn because he was one of my coaches at my first school, Bethune-Cookman.”

Q:  I wanted to ask you guys what it was like growing up in Illinois as far as the basketball culture up there. What was your basketball experience like back home?

Burrell: “In Chicago, there’s a lot of talent in the CPS, where I played. There are a lot of pros that come out of that league. But no matter how skilled you are, you’ve gotta be tough if you want to succeed there.”

Suggs: “There’s a lot of talent back in Rockford, but it’s often overlooked because of Chicago. It’s a bigger city and the competition is a lot better. As I got older, I started playing for a couple Chicago AAU teams, and that helped me grow as a player and get exposure.”

Q: Melo, what was it like for you winning a state championship back in high school? Would that be your best basketball memory so far?

Burrell: “Yeah that’s something everybody dreams about. I’ll have that memory forever.”

Q: Are you excited to run the pick and roll offense?

Burrell: “I’m excited to play with some talented guards, it’s going to be hard to stop us because the offense allows everyone to be a threat.”

Q: “Melo I did some homework on you and saw you played in every game last year at Central Michigan. Did you transfer to try to have a bigger role in the lineup?”

Burrell: “I really just wanted to find a place that actually fit my style of play, and allows me the freedom to use all of my strengths.”